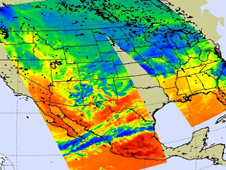 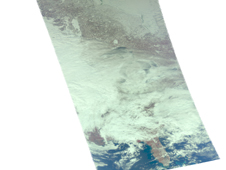 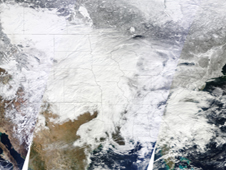 › View larger image
Three images from the Moderate Resolution Imaging Spectroradiometer (MODIS) aboard NASA's Terra satellite were combined to create this image of the storm system. The images were captured on January 31 at 10:30 a.m., 12:05 p.m., and 1:45 p.m. Eastern Time (15:30, 17:05, and 18:45 UTC). Diagonal lines across the image show the boundaries between the overpasses. White gaps are areas where the sensor did not collect data. The image has a resolution of one kilometer per pixel. Credit: NASA Goddard MODIS Rapid Response Team 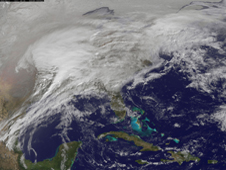 › View larger image
This visible image was captured by the GOES-13 satellite and shows the low pressure area stretching from the Colorado Rockies and Texas east to New England. The image shows the storm on Feb. 1 at 1401 UTC (9:01 a.m. EST) by the NASA GOES Project, located at NASA's Goddard Space Flight Center in Greenbelt, Md. The GOES series of satellites are operated by NOAA. Credit: NOAA/NASA GOES Project It has been called one of the largest winter storms since the 1950s, and is affecting 30 U.S. states today with snow, sleet, freezing rain and rain. NASA satellites have gathering data on the storm that stretches from Texas and the Rockies to the New England states.

NASA's Aqua and Terra satellites have been providing visible, infrared and microwave looks at the storm system's clouds, precipitation, temperatures and extent.

Visible and infrared images and animations of the storm's clouds and movement are created every 15 minutes by the NASA GOES Project at NASA's Goddard Space Flight Center, Greenbelt, Md. using data from GOES-11 and GOES-13, the Geostationary Operational Environmental Satellites. The GOES-13 and GOES-11 satellites that cover the eastern and western U.S., respectively, are operated by NOAA.

A visible image captured by the GOES-13 satellite this morning, Feb. 1 at 1401 UTC (9:01 a.m. EST) showed the low pressure area stretching from the Colorado Rockies and Texas east to New England and a massive area of clouds over the Midwest. The image showed what appeared to be "tails" over Texas and the Gulf coast. Those "tails" are areas where severe thunderstorms are possible today. To see an animation of the last two days of GOES-13 satellite images that show the progression of the storm, go to: http://goes.gsfc.nasa.gov/goescolor/goeseast/hurricane2/movie/latest_sml.mov.

Another amazing satellite image created at NASA Goddard involved data from the Moderate Resolution Imaging Spectroradiometer (MODIS) that flies aboard NASA's Terra satellite. Because of its massive size, three MODIS images were combined to create an image of the storm system. The images were captured each time the Terra satellite passed over the U.S. on January 31 at 10:30 a.m., 12:05 p.m., and 1:45 p.m. Eastern Time (15:30, 17:05, and 18:45 UTC). The image clearly shows snow on the ground from Pennsylvania into the New England states, while the large area of clouds associated with the storm lie to the west. The image has a resolution of one kilometer per pixel.

NASA's Jet Propulsion Laboratory in Pasadena, Calif. supplied infrared data of the storm system. The Atmospheric Infrared Sounder (AIRS) instrument that flies aboard NASA's Aqua satellite captured infrared imagery of the storm on Jan. 31, 2011 at 18:47 UTC (1:47 p.m. EST). The image showed the early stages of a developing storm in the plains and Midwestern states and highlighted a preponderance of cold air in Canada and the northern U.S. that set the stage for the snowfall today.

A visible image created from AIRS data on Jan. 31 showed thickening clouds along a developing intense front in the plains and Midwestern states that will produce excessive snow, freezing rain, sleet, and wind in those areas today. The associated low pressure area guiding the storm will slide from Texas through the Mississippi Valley, Ohio Valley and then into New England.

NOAA's National Weather Service noted in their discussion today that this winter storm could easily be "one of the worst this season with blizzard conditions throughout much of the Midwest states, severe ice accretion from the middle Mississippi River valley eastward through parts of the Ohio Valley and into southern New England and heavy rain and severe thunderstorms over the deep south."

Nine states are under blizzard warnings today and Chicago is expecting two feet of snow by the evening commute and overnight. Residents of Oklahoma City are experiencing snow and gusty winds and expecting up to one and a half feet of snow today. On the southern end of this storm system, severe storms moved through Texas this morning, while areas from Birmingham to Memphis and Atlanta may also receive severe weather and between 1 and 2 inches of heavy rainfall as the system continues move east today.

The U.S. northeast is expecting snow, sleet and rain. Some northeastern U.S. cities have already recorded record snowfall and more is expected from this storm. Philadelphia has already recorded 37 inches of snow and New York City has received 56 inches. Philadelphia is expecting freezing rain today while New York City is forecast to receive between 3 and 6 inches of snow and sleet and between a quarter to 4 tenths of an inch of ice accumulation by late Wednesday.

As the system continues east, the National Weather Service is forecasting a large snowfall for New England. Boston is forecast to receive between 8 and 18 inches of snow and Portland, Maine, is expected to receive between 11 and 17 inches. It has already been a long winter in the U.S. northeast and today is the first day of February, a month known to be the snowiest of the season.