The Geostationary Operational Environmental Satellites (GOES) that cover the U.S. weather, GOES-11 and GOES-13 are operated by NOAA, and the NASA GOES Project at NASA's Goddard Space Flight Center in Greenbelt, Md. creates images and animations from those satellite data.

Snowfall across 30 U.S. States last week followed by the aftermath of the Groundhog Day blizzard shows snow from the Great Plains to New England under the cold and clear skies that followed. The storms made for a nice snowy satellite-view panorama in this February 3, 2011 GOES-13 satellite image captured at 1445 UTC (11:45 a.m. EST). Credit: NOAA/NASA GOES Project
› Larger image

A Feb. 3 GOES-13 image provided a snowy panorama of the U.S. and showed the snowfall on the ground in many of those 30 U.S. states from last week's giant storm. Last week's storm brought snow, sleet, freezing rain and rain from Texas and the Rockies to the New England states.

In satellite imagery, snow visibility depends on snow depth, terrain, and civilization. Dennis Chesters, a NASA GOES Project scientist at Goddard provided some guidance in looking at satellite images to find snow on the ground. "Wooded regions like the Appalachians and Midwest river valleys can remain dark even with a foot of snow on the ground," Chesters said. "Metropolitan areas like Chicago are dark due to urban development like cleared highways and parking lots."


Usually in mid-winter, Lake Erie is lightly frozen over as it appeared in the February 3 GOES-13 image. "Lake Erie is more easily chilled than the other Great Lakes because it is the shallowest -- waters along the northern shore are open because prevailing northwest winds push the lake ice away from the Canadian shore," he said.

Chesters also addressed the veiny-looking images on the GOES-13 satellite image. He said "the low winter vegetation on the Midwest allows the snow to delineate the great river systems of the Missouri, Mississippi and Illinois Rivers converging on St. Louis."

NASA's Terra satellite captured a piece of the snowy puzzle this past weekend, capturing snow in the south central U.S. where countless fans flocked to the Super Bowl. Despite the snow in Dallas, Texas, those fans flocked to snow-covered Cowboys Stadium where the Green Bay Packers captured their fourth Super Bowl victory in a 31 to 25 victory over the Pittsburgh Steelers. 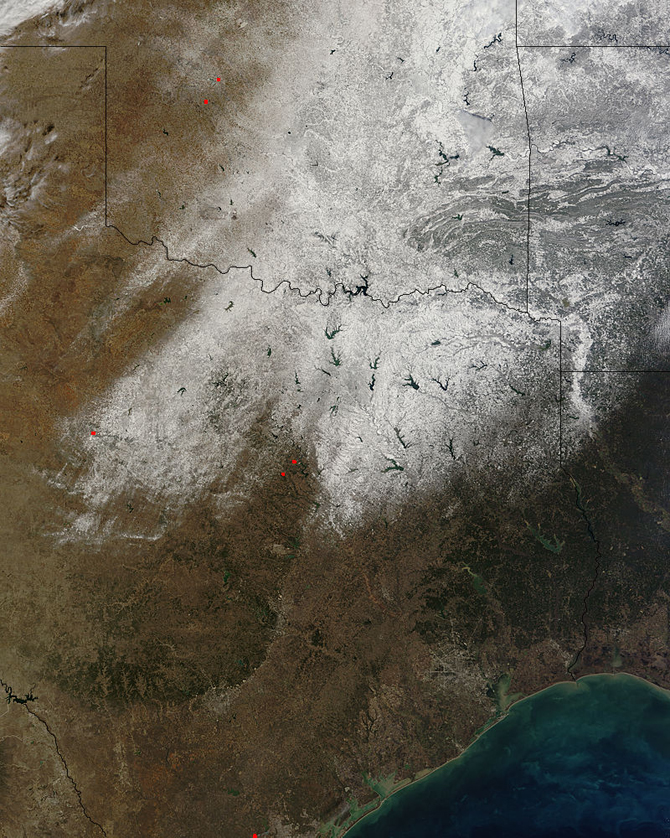 This MODIS image from the Terra satellite was captured on Feb 5 at 17:30 UTC (12:30 p.m. EST) and shows snowfall on the ground in northeast Texas (lower left), Oklahoma (above Texas), Arkansas (east of Oklahoma), and the northwestern tip of Louisiana (lower right). Credit: NASA Goddard MODIS Rapid Response Team
› Larger image

A visible image from NASA's Terra satellite's Moderate Resolution Imaging Spectroradiometer (MODIS) instrument captured that visible image of snowfall on Feb 5 at 17:30 UTC (12:30 p.m. EST). The image showed the snowfall on the ground that caused a lot of problems for those Super Bowl fans in Dallas, Texas and throughout the rest of northeast Texas this weekend. Snowfall is also apparent in Oklahoma where record snowfall closed down Oklahoma City last week. Snows are also visible in the Ozark Mountains in Arkansas and the northwestern tip of Louisiana.