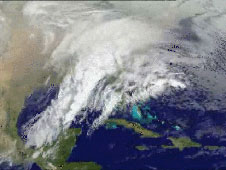 > View the movie of the blizzard
This is a still from the movie of GOES satellite imagery compiled from February 1-16, 2010 when 2 blizzards hit the Baltimore/Washington, D.C. area. Credit: NASA GOES Project, Dennis Chesters 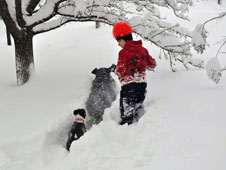 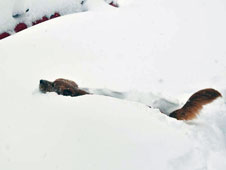 > View larger image
Bruce Jenner, a Golden Retriever not an Olympic medalist, forges through the snow after the blizzard hit the suburbs of Maryland. Credit: Lynn Jenner/NASA 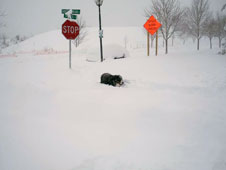 > View larger image
Duncan, a Bernese Mountain dog whose breed hails from Bern, Switzerland, feels very much at home in the cold and snow. He made his way to the end of the street creating a path for his human companions. Credit: Lynn Jenner/NASA During the first two weeks of February 2010, the GOES-12 weather satellite observed a record-setting series of "Nor'easter" snow storms which blanketed the mid-Atlantic coast in two blizzards.

Washington, D.C. normally averages only 16 inches of snow per year, but this year most of the season's snowfall arrived over several days and the Geostationary Operational Environmental Satellite called GOES-12 captured the storms.

"It is a pleasure to see the fruits of the hard work and commitment from the NASA and NOAA team," said Andre Dress, GOES N-P NASA Deputy Project Manager, at NASA Goddard. "These images are very impressive and I am excited to think that these were taken with the older satellites. NOAA plans to put into service the newer GOES N-P design, this April. I know we will be seeing better and more exhilarating images this year," Dress said.

These storms are called "Nor'easters" because the counter-clockwise circulation around a low pressure system on the Atlantic coast pushes moist sea air from the north-east into arctic air over the land. This windy mixture creates a very efficient snow-making machine from Boston to Washington. "The GOES movie illustrates how succeeding storms form along the Gulf coast, travel up the Atlantic coast, pause over the mid-Atlantic states, and finally slide out to sea," said Dennis Chesters of the NASA GOES Project.

This movie was created by overlaying the clouds observed several times per hour by NOAA's GOES Imager onto a true-color map previously derived from NASA's MODIS land-mapping instrument. The infrared channels on GOES detect clouds day and night, which are portrayed as grey for low clouds and white for high clouds. During the day, the visible channel on GOES adds shadow-texture to the clouds and illuminates the snow on the ground.

The movie compresses 16 days into 2 minutes. It illustrates how continental-scale land/sea/air phenomena come together to make large winter storms. NOAA's ground/space-based observing system and numerical weather models did an excellent job of accurately forecasting the location and depth of each East Coast blizzard in this series.