The sky is gray. It's cold. Three forecast models predicted snow. It's 9:20 pm. Gail Skofronick-Jackson looks out the window of the operations trailer where she and her colleagues are running the Global Precipitation Measurement (GPM) mission's Cold-season Precipitation Experiment (GCPEx). The DC-8 research plane circles overhead, ready to measure the snowfall.

There's nothing. The sky is still gray. It's still cold. The operations trailer sits in the middle of a field in Egbert, Ontario, Canada where it's surrounded by an acre of scientific instruments, all still, waiting.

It's 10:20 pm. The sky is a darker shade of gray. The night is colder. The science team has blank screens showing no active falling snow and a big case of boredom. There's still nothing. They send the DC-8 back to its hanger and pack it in.

"If the models and forecasts were correct we wouldn't be out here," says Skofronick-Jackson. She's the GPM Deputy Project Scientist and a specialist in the remote sensing of snow at NASA's Goddard Space Flight Center, Greenbelt, Md. In running GCPEx, she and the team are attempting to simulate the snow measurements that will be made by the GPM satellite mission that launches 2014. They do that by gathering snow data with instruments on the ground and aboard aircraft that fly through and over snowstorms. 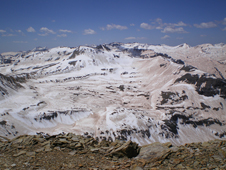 Improving observations and retrievals from NASA satellites, airborne instruments, and ground stations are showing the impact of dust and black carbon on snow and glacier melt in the mountains and polar regions of the globe. In snow, these particles absorb sunlight and quickly transfer that energy into warmth, which melts that snow faster.
In the Colorado Rocky Mountains snowpack, dust from disturbed deserts of the West has increased by 500 percent and shortened snow cover duration by a month or more. This means the early meltwater is available to plants earlier in the spring, lengthening the growing season. The vegetation has more time to transpire water back into the atmosphere. As a result, 5 percent less water from the total snowpack flows into the Upper Colorado River as runoff.
Worldwide, pollution from industrialization and land cover change have and continue to impact both nearby and remote snow and ice. In the coming years, the combination of observations and modeling will give scientists a quantitative knowledge of these impacts that can improve our climate modeling and water resource management. Credit: T. H. Painter, Snow Optics Laboratory, JPL/Caltech
› Larger image 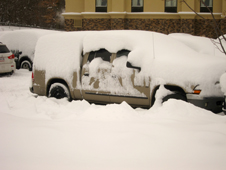 After four days of waiting, a heavy lake effect snow fall fell over Southern Ontario. The GCPEx ground station received about two inches, while a whopping 16 inches fell on nearby town Barrie, 12 miles away. Photo taken February 12, 2012. Credit: NASA/Chris Kidd
› Larger image But to collect data on snow, it has to snow.

Even without high-tech NASA instruments, snow is challenging to measure. Ground measurements are plagued by blowing snow and inconsistent methods, and snow tends to be geographically spotty.

"We have local measurements, like in ski resorts," says remote sensing specialist Guosheng Liu of Florida State University and a member of the GPM science team. But he adds that when a single snow system can put down two inches in one place and over a foot twelve miles away, a scattering of points doesn't say much about the big picture of snowfall around the world, and that includes inaccessible areas of the Arctic and Antarctic ice sheets, as well as over the oceans and in mountains ranges. Enter NASA and its worldwide coverage of Earth from satellites in space.

"We've done many decades of rain," says Liu. "But for snow, we are still in the very early stage." Good, consistent snow measurements are the next step for understanding snow's roles, both in local weather patterns that can shut down cities, freeze roads, or just be a shoveling nuisance and in how snow feeds global climate and water cycles.

Flakes, Flakes Everywhere, Yet Not a Drop To Drink

Knowing how much water is available for irrigation and drinking water through the spring and summer depends on knowing the size of the winter snowpack on the ground, especially in mountainous regions where snowmelt is a major source of freshwater.

"Or, on the contrary," says snow hydrologist Dorothy Hall at NASA Goddard, "will there be hardly any water available and will there be drought conditions?"

Hall works with the MODIS (Moderate Resolution Imaging Spectroradiometer) instruments on the Earth-observing satellites Terra and Aqua, which take daily images of snow cover in the visible and near-infrared regions of the electromagnetic spectrum. Every day, MODIS maps of North America show percent snow cover in white and blue colors, using gray for regions where clouds block its view. These daily maps add up to a summary of the changes in snow cover over the course of a season, growing to a maximum when it's cold and then melting when spring arrives. Combining these snow cover maps with hydrological models built for individual mountain basins can give the volume of water that's expected to flow into reservoirs.

"Water resource managers need to know this information for planning purposes so they can plan their reservoir heights," Hall says. "The more accurate the information is on the amount of snow cover that will be melting, the more money they can save." The reservoirs would not lose potential water for their customers to overflow or bleed off too much in anticipation of water that does not come.

In Over Your Head

Although visible and infrared satellite sensors are great for getting a worldwide view of snow, they have two drawbacks. One is that from space, clouds block the satellite's view of the ground, and the clouds are constantly moving so they're hard to remove.

Second is that from space, a massive snowdrift can look the same as a few inches. Snow depth includes old snow, new snow, and crusty snow that has melted and refrozen. Knowing the volume of total snow is necessary to accurately estimate its water content, and it's all about density -- how much snow is present per unit volume. Big fluffy flakes take up more space than smaller, more compact flakes, so for the same number of inches, fluffy snow holds less water.

To get to the bottom of snow depth, Jim Foster of NASA Goddard uses the microwave radiometer on the Aqua satellite, the Advanced Microwave Scanning Radiometer-Earth Observing System (AMSR-E). The advantage of microwaves -- a range of waves of a similar frequency to those used in your kitchen -- is that they pass through clouds and into the snow pack and thus can be used to measure snow cover, and to a certain degree snow depth.

The AMSR-E works by reading the microwaves that Earth constantly radiates from its surface. Natural phenomena like deserts, lakes, forests, and snow change the radiation coming from the Earth that is detected by the radiometer. Different particles affect different microwave frequencies, which distinguishes them. So snow in the top millimeter of a snowpack can affect high frequency microwaves, while snow 50 centimeters below affects lower frequency microwaves. Radiometers like AMSR-E have several of the microwave frequencies that scientists can use to determine snow's depth.

"What's difficult is you've got a footprint that's anywhere from five kilometers to 50 kilometers across," says Skofronick-Jackson. "It's integrating over that whole area." That integrated number can include a lot of variety of snow depth on the ground. It can also include snow falling through the atmosphere, which scientists are increasingly interested in measuring to find out how much new snow is accumulating. But the signal from falling snow in some conditions is indistinguishable from snow already on the ground.

Radar to the rescue

One way to overcome the gaps in radiometer data is to use radar. CloudSat, a satellite launched in 2006, uses radar to measure clouds and precipitation, and its Cloud Profiling Radar has become one of the major tools used to detect falling snow.

The radar works by actively sending out microwaves on a single frequency that detects very small particles within clouds. When the microwave pulses encounter a cloud particle or a snowflake, it reflects part of the pulse back to the radar's sensors. By timing the interval between when the pulse was sent and then received, the radar knows how far away those particles are.

This radar is able to give a more accurate picture of where and how much snow is in the atmosphere, but converting that measurement to how much water falls as snow is tricky, says Graeme Stephens, Project Scientist for CloudSat at NASA's Jet Propulsion Laboratory in Pasadena, Calif. "Snowflakes are very complicated. They're not solid water. Sometimes they're smushy, sometimes they're full of air." Stephens adds that snowflakes have an array of different shapes too and each type holds different amounts of water, changing how "wet" the snow is.

Guosheng Liu used one year of CloudSat data to construct the first global snowfall map in 2008. Even with the difficulties in measuring snow, what Liu found was surprising.

In the Southern Hemisphere along the Antarctic coast region he found a lot more snow than expected. When that snowfall was converted into water, Liu says that the amount was one-quarter to one-third the amount of water that falls as rain in the rainiest areas of the tropics. "That has a big implication for the global hydrological circulation for where that water is going," he says.

None of the global models predicted that much snow. In fact, models generally don't handle snow and its impacts very well. "If there's no observations telling the models how much the amounts should be, the models usually do a very terrible job," says Liu.

Improving model accuracy allows scientists to ask bigger questions about the global water and climate cycles, including how our complex planet is changing.

"Approximately two-thirds of observed sea level rise we think is coming from the loss of ice of the major ice sheets in Greenland and Antarctica," Stephens says. "But the Antarctic isn't losing ice everywhere. It gains ice mass in some areas."

To understand the dynamics of how the ice shelves gain and then lose ice long term, Stephens says they have to understand the inputs to the ice balance. "Snow is the input, and the loss to the oceans is one of the outputs. So it's in and out like a bathtub," he says.

By adding in as much data as possible that cause changes in the ice, researchers can better develop models that will project the rate of sea level rise, data that is vital to coastal areas and many island nations.

"Without snow, we're really missing a crucial component to understanding how our world works," says GCPEx's Gail Skofronick-Jackson. So as programs like CloudSat, Aqua, and the upcoming Global Precipitation Measurement mission continue, scientists will begin collecting the long records necessary to see if patterns emerge.

One that's already becoming clear uses coarse resolution snow cover maps made by National Oceanic and Atmospheric Administration (NOAA) satellites since 1966. The long record shows that in recent decades, snow cover is melting earlier in the spring than it did in the Sixties and Seventies. "This is consistent with springtime warming related to regional and global warming, at least in North America," says Dorothy Hall, whose 12 years of MODIS snow cover maps overlap and confirm the NOAA record.

But to collect snow data, what you need is snow. Back in the trailer in Canada, after four days of waiting, Skofronick-Jackson and her GCPEx get snow. As a storm rolled over Lake Huron bringing with it two to 20 inches across the region, it covered the GCPEx instruments in a blanket of white.