Grow Text SizeShrink Text Size
On Top of the Smokies, All Covered in Light Rain
The Real Story of Precipitation in the Southern Appalachian Mountains 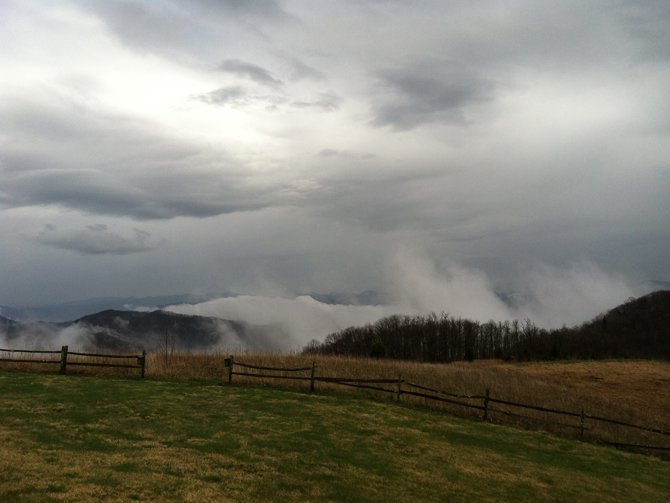 › View larger
Mid-morning peak in light rainfall appears as clouds and fog at Purchase Knob in the Great Smoky Mountains National Park. Light rainfall is the most reliable and most frequent form of rainfall in the region, contributing 50 to 60 percent of the total precipitation over a year. Light rain is no less than the lifeline of freshwater resources for the landscape’s ecosystems. Credit: NASA/Barros

If you walk into a cloud at the top of a mountain with a cup to slake your thirst, it might take a while for your cup to fill. The tiny, barely-there droplets are difficult to see, and for scientists they, along with rain and snow, are among the hardest variables to measure in Earth Science, says Ana Barros, professor of engineering at Duke University. As part of the Science Team for NASA's Precipitation Measurement Missions (PMM) that measure rainfall from space, Barros and her research team trekked into the Great Smoky Mountains and other areas of the southern Appalachian Mountains, to learn more about where, when and how rain falls in the rugged terrain. What they found was eye-opening: much of the water people counted on falls as light rain, and no one knew about it.

Understanding precipitation in the mountains is one of the first steps to understanding local ecology, regional climate, and the effects of any changes that might impact the nearly 30 million people in Georgia, South and North Carolina, and Tennessee whose water supply comes from southern Appalachian headwaters. To answer some of these big questions, scientists are increasingly turning to satellite data.

Barros describes satellite-based precipitation instruments as a game changer for scientists in how they study hydrology and do science. NASA's Tropical Rainfall Measuring Mission (TRMM), launched in 1997, and the upcoming Global Precipitation Measurement (GPM) mission that will launch in February 2014, see more of Earth than ground-based instruments and from a vantage point that is not impeded by topography in mountainous regions. TRMM takes multiple measurements—at different times of day—to give researchers improved observations of weather systems. But how accurate is the data they deliver?

While Barros and her team were sticking sensors on mountaintops, they were also downloading data from TRMM's precipitation measurement instruments and data processing products. The dual collection of data from the ground and the sky allows scientists like Barros to validate and improve those satellite measurements, and make a few discoveries along the way.

They're Called the Smokies, But It's Not What You Think

Prior to Barros's work, which began in 2007, ground based rainfall stations for weather forecasting and climate monitoring in the southern Appalachians were few and far between. Ten rain gauges were located at elevations above 3,280 feet (1,000 meters) to monitor an area of roughly 28,957 square miles (75,000 square kilometers). Little information was available on what was truly happening with water falling as precipitation in remote places, in high places—places no one would call easily accessible.

Enter the research team. Bushwhacking up mountains, suffering stings from angry bees, and walking where 3,000 bears run wild, Barros and her team installed a network of 32 science-grade rain gauge stations between the summers of 2007 and 2009. The stations, all above 3,280 feet (1,000 meters), dotted seven range-following linear ridges that cut across the east-west span of the southern Appalachian Mountains, from North Carolina to Tennessee. The study area covered 540 square miles (1,400 square kilometers), including the Great Smoky Mountains National Park in the Pigeon River Basin. 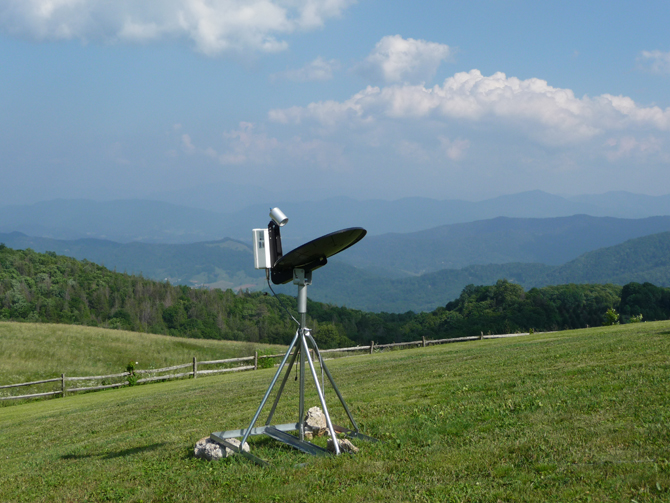 › View larger
MicroRain Radar at Purchase Knob in the Great Smoky Mountains National Park, is a vertical profiler radar that delivers information about structure in the atmospheric column and enables scientists to estimate the vertical distribution of rainfall. At all times of the day, light rainfall is the dominant type of precipitation. Credit: NASA/Barros

The team also measured conditions in the atmospheric column at each location. Balloons—either tethered to the ground or free flying—carried sensors into the clouds. Two mobile MicroRain Radars, which the team moved from station to station, enabled the scientists to estimate the vertical distribution of rainfall. At some stations, local wifi sent the radar data over the Internet in real time, but more often, the researchers had to make the long slog to the rain gauge stations to ensure sensors and data were in good order, and to evaluate data coming from the satellites. During intense field observing campaigns, the team had to get friendly with solitude and roughing it in the outdoors.

Who'll Start the Rain?
Plants Do Their Part.

One of the questions the researchers have surrounds a localized rainfall-making system. Are the plants themselves providing the mechanism in which rainfall, and therefore, clouds are trapped nearby? Plants produce volatile organic compounds that change into tiny particles, called aerosols. These tiny particles attract water to condense around them, which in turn allows clouds to form and grow. So plants have an effect on where fog and clouds are forming.

Fog has its effect on clouds, too, creating pools of water droplets at different elevations that shape where low clouds will grow across a landscape. Low level clouds in turn play a critical role in anchoring rainfall by providing a very small base of liquid water droplets that feed on ones that come from larger weather systems. Local clouds can increase the rate of rainfall by impressive amounts. Rain and clouds interact with each other, growing more lavish in certain places, which can increase a locality’s rainfall amounts. "It's almost like the ecosystem is contriving to trap its own water or harvesting it," Dr. Barros says.
Most people don't realize, Barros says, the southern Appalachians have the highest annual rainfall of the southeastern United States, as much as humid Florida. It rains on average 54 inches per year in the Everglades, about 50 inches in North Carolina, and about 58 to 60 inches a year in the Appalachians. The Mountains contribute to the enhanced weather: moist air bumps into them as it moves over the land, and when it rises, it cools and can't hold on to its water vapor which condensates and forms clouds. This leads to as much rain falling in the Appalachians as is delivered to the coast by hurricanes like Francis or Ivan. And in years without a hurricane or tropical storm to factor in, it rains nearly the same amount, on average, every month in the southern Appalachians. Forty percent in summer and up to 60 to 70 percent in winter of all that rainfall is very light rainfall.

That's why the Smokies are called the Smokies, Dr. Barros explains. "There's always a little bit of fog and low level clouds and there's always a little bit of rain going on in the air." Until her team measured it, scientists didn't know how important light rain is to the region. At all times of the day, light rainfall is the dominant type of precipitation. And because light rainfall is the most reliable and most frequent form of rainfall in the region, Barros says, contributing 50 to 60 percent of total precipitation over a year, it governs the regional water cycle. Light rain is no less than the lifeline of freshwater resources for the landscape's ecosystems. This is probably also true in mountainous regions everywhere, Barros' finds, which carries big implications for communities worldwide.

If you're a forest, an ecosystem, an animal, a person, or an urban community—namely everything and everyone—you can receive the amount of water you need for the year super fast. A fifteen-minute blast from heavy rainfall might give you your total water budget, torrents of water rushing over the ground, heading into channels, stream networks and rivers. Or you might receive your water slowly, spread out over a couple of months as light rainfall, a mist that gently settles. At the end of the year, you can have the same amount of water, just over different spans of time, and that affects where the water goes. If it falls fast, in a short span of time, water won't linger on the ground. If it falls slowly, and persistently, moisture from light rain can infiltrate soil layers, percolate deeper, and recharge underground aquifers.

So what happens to light rain as global climate shifts, and things grow warmer? At lower elevations, more of the fine drops from light rain will evaporate in the air and fail to reach the ground. Lower elevations will have to contend with not only higher temperatures, but less cloud cover—affecting a cycle in which plants and forests and rain have this amazing rhythm in which one feeds the other (see sidebar). Depending on how daytime temperatures change, Barros' thinks that morning light rainfall would likely be more sustainable than afternoon light rainfall.

There you have the set up for huge impacts, some of which are already making the news. As Barros explains, most of the states in the region have some sort of lawsuit against each other because of access to water resources. Georgia, North Carolina and South Carolina share aquifers. "In North Carolina," Dr. Barros says, "different stakeholders are suing each other regarding inter-basin water transfers because of the high frequency of drought we're having. So this dependency on light rainfall can be more critical than all the big floods and all the big disasters we're talking about in terms of sustainability, in terms of long-term environmental quality."

How things shape up bears further study, but one thing that is critical to future water resource planning is knowing where and how and when those resources are coming, and how much they are changing. Barros and others' work to improve satellite measurements, especially for the Global Precipitation Measurement mission that will have increased sensitivity to detect light rain, are the first step to a better understanding of the regional water cycle. By knowing how large a role light rain plays in the water budget of the southern Appalachian region, people can plan for future changes in nature's water delivery system.

For more information about the TRMM and GPM missions: