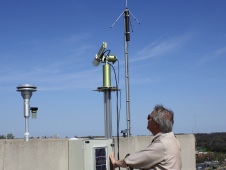 › Larger view
Raymond Hoff examines a sun photometer on the roof of the physics building at UMBC. Credit: NASA/Voiland Pollen counts are hovering at record levels in the United States. A massive plume of ash — released by a volcano with a tongue-twister of a name — is causing havoc across Europe. Parts of the Himalayas are bathed in soot levels comparable to those found over major cities. Details about all of those events — and much more — are available from the Smog Blog, a website that monitors air pollution much like meteorologists track the daily weather.

The blog, managed by faculty and graduate students from the University of Maryland – Baltimore County (UMBC) and NASA, began as a casual suggestion from a student four years ago. Today, it is a web traffic magnet, racking up 20 million hits in four years and serving readers ranging from weather forecasters to asthmatics to amateur astronomers.

We sat down with lead smog blogger Raymond Hoff, a UMBC physicist and the director of the NASA-UMBC Joint Center for Earth Systems Technology, to learn more about his group's foray into blogging.


What is the Smog Blog?
It’s a daily diary of pollution in the United States, written by seven graduate students and me. We use data from NASA, the National Oceanic and Atmospheric Administration, the Environmental Protection Agency (EPA), and other institutions to summarize what’s happening with air quality.

How do you choose what to write about?
We look for when ground-level pollutants—particularly small particles in the air called aerosols—are high enough that they would exceed some EPA criteria. The idea is to get a feeling for what the major air quality events are around the country. Our focus is primarily the continental United States, Canada, and Mexico. But NASA orbiting assets are everywhere, so if something major happens elsewhere—such as ash plume that’s now over Europe—we’ll pull that out and write a special post about it. 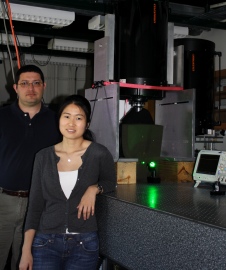 › Larger image
Smog bloggers Patricia Sawamura (right) and Ruben Delgado (left) stand next to a LIDAR instrument used to study air quality. Credit: NASA/Voiland If somebody knows just one thing about aerosols, what should it be?
It's important to realize that aerosols have both health and environmental effects.

What are the main types of aerosols?
Sulfates, which are produced by sulfur dioxide emissions from power plants; nitrates, which are produced by nitrogen dioxide from cars; organic carbon, which comes from natural sources like trees and from some chemical processes; black carbon, which comes from diesel exhaust; and dust. There’s also sea salt, if you’re near the ocean.

Aerosols from trees. Really?
Back in the 1980s, Ronald Reagan said trees cause pollution. And, you know, Ronald Reagan was partly right. Volatile organic compounds that come off pine trees can cause haze. The Blue Ridge Mountains got their name because of these compounds. However, because they’re at natural levels, they probably don’t have much of a health impact.

What types of aerosols do have a strong health impact?
The human respiratory system is designed so that most of the big particles—like dust and salt—are caught by the nasal passages. Smaller particles, like black carbon, can get deep into the lungs and cause problems.

What’s the most dramatic air quality event you’ve reported since you’ve been blogging?
Our number of hits was huge during last year's California wildfires. People were worried about whether the fires and smoke were going to move their way.

What do aerosols have to do with climate?
Particles in the air, especially sulfates, reflect sunlight and make the planet darker than it would have been otherwise. They work in opposition to the warming we get from carbon dioxide. It’s quite important to understand the magnitude of the cooling from aerosols if you want to predict what global warming is going to be.

When you look at long term pollution trends, what do you see?
The trends in manmade pollution — sulfates, for example — probably peaked in the 1950s or 60s, before North America and Europe instituted pollution controls. Concentrations of sulfates have gone down, so problems like acid rain are less of a issue in the United States than they used to be. China, India, and other developing countries, meanwhile, look more like we did in the 1950s.

How does air quality compare in different regions of the U.S.?
You have a lot of pollution caused by power plants in the East. We have more people here, and more traffic, so sulfates and nitrates are higher. In the West, you get more dust and wildfires. Nitrates are high in both the East and West. Organics are common wherever there’s lot of vegetation, such as the forests of the Southeast. 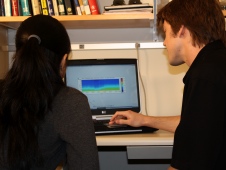 › Larger image
Smog bloggers work on an April blog post. Credit: NASA/Voiland Has blogging about air quality changed the way you live?
Well, I wish I had a hybrid. And I don’t mow my grass on red days. I’m probably the only one in Baltimore who pays attention to that.

Your group writes daily. Do you ever make mistakes?
Just like weather forecasters, we make mistakes sometimes. But the urgency of data in air quality is now. Someone who might have respiratory problems because of today’s pollution needs to learn about it today, not two days from now.

Any last words about blogging?
The interactivity is important. When information is publicly available and you can read it from day to day, people tend to get more involved. Blogs have the ability to draw the public in to a conversation about science that probably wouldn’t happen if they were at a local restaurant or having a cup of coffee.