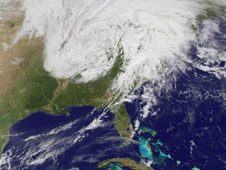 › View larger image
› Click for movie of the system from April 14 through April 16, 2011.
› High def version of movie
This visible image from the GOES-13 satellite on April 14 at 1440 UTC (10:40 a.m. EDT) shows the line of clouds associated with the powerful cold front moving through the Carolinas and Virginia, where it triggered tornadoes. The MOVIE was created at NASA using images from the NOAA GOES-13 satellite. It shows the progression of the powerful cold front that triggered severe weather from the plains to the east coast from April 15 to April 17, 2011. In the movie, you can see the low pressure area over Oklahoma on April 15, in the tight circular rotation and watch it move east. Credit: NOAA/NASA GOES Project The GOES-13 satellite captured images of the powerful weather system that triggered severe weather in the southern U.S. this weekend, and NASA created an animation to show its progression. GOES-13 satellite data showed the strong cold front as it moved eastward from Saturday through Monday and generated tornadoes before moving off-shore into the Atlantic Ocean. NASA's Aqua satellite also captured data from the system and took the temperature of the cold front's cloud tops and revealing severely cold temperatures of some of the thunderstorms.

The Geostationary Operational Environmental Satellite called GOES-13 monitors weather in the eastern half of the U.S. and is operated by NOAA. The NASA GOES Project at NASA's Goddard Space Flight Center in Greenbelt, Md. creates images and animations from the GOES satellite data. The NASA GOES Project created an animation of the satellite imagery from April 15 through April 17 that showed the movement of the powerful cold front through the eastern U.S. In the movie, you can see the low pressure area over Oklahoma on April 15, in a tight circular rotation and watch it move east bringing the cold front with it.

NOAA's Storm Prediction Center noted that the system generated 243 tornadoes in 13 states in three days, from April 14-16. According to the Weather Channel, the weather system generated 29 tornadoes on April 14 across the states of Oklahoma, Kansas, Arkansas and Texas. As the storm moved east, 73 tornadoes touched down in Alabama, Mississippi, Illinois, Arkansas, Kentucky, Missouri and Louisiana on April 15. On Saturday, April 16, 51 tornadoes were reported in North Carolina, Virginia, South Carolina, Alabama, Georgia and Maryland. Alabama, Mississippi, North Carolina and Virginia have all declared a state of emergency.

The National Weather Service ranks the power of a tornado by the Enhanced-F scale or "EF" Scale. The EF Scale is a set of wind estimates (not measurements) based on damage. Its uses three-second gusts estimated at the point of damage based on a judgment of 8 levels of damage to the 28 indicators. These estimates vary with height and exposure. To see the indicators and scale, visit: › http://www.spc.noaa.gov/faq/tornado/ef-scale.html 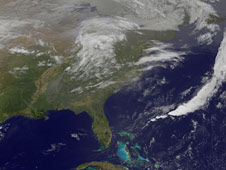 › View larger image
This visible image from the GOES-13 satellite on April 18 shows the line of clouds associated with the powerful cold front that triggered severe weather throughout the U.S. south is still visible in the Atlantic Ocean, hundreds of miles off the U.S. East coast. Credit: NOAA/NASA GOES Project As the system continued to move east, an EF1 tornado touched down in Little Rock, Ark. early Friday morning, April 15, with winds between 86 and 110 mph. The National Weather Service also confirmed EF1 tornadoes in western Ark., near the town of Dyer, Crawford County and Branch, in Franklin County.

When the front swept through North Carolina on Saturday, April 16, the National Weather Service confirmed six tornadoes hit the central part of the state. The motion of the line of clouds associated with the front and the severe weather can be seen on the GOES-13 satellite animation. Reports of tornadoes came from Alamance, Cumberland, Lee, Person and Wake counties.

The National Weather Service in North Carolina has confirmed the strength of six different tornadoes that hit the state this weekend. They are working on confirming other possible tornadoes, as teams survey more damaged areas in the state. Two of the tornadoes were powerful EF3s with estimated winds near 160 mph. One of those tornadoes traveled through Hoke, Cumberland and Harnett counties while the other powerhouse traveled through Lee and Wake counties causing damage in their wake. The two EF3s had paths that stretched more than 60 miles, according to the National Weather Service.

A less powerful, but destructive EF2 tornado tracked through Wilson County, while EF1s affected Johnston and southeastern Cumberland and Sampson County. Person County had a touchdown of an EF0 twister.

News stations around the country have been showing footage of the Loews hardware store in Sanford that was completely destroyed. Television footage has shown the collapsed building with lawnmowers still positioned in a straight line outside the store. The roof had been torn off by one of the EF3 tornadoes. 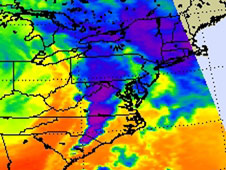 In Virginia, storms associated with the powerful cold front caused flash flooding, wind damage, downed trees and power outages. There were five deaths reported from the storms. According to Dominion Virginia power, a tornado touched down at the switchyard of a Surry, Va. nuclear power station on Sat night, April 16. The tornado cut electricity and triggered a shutdown of two reactors.

In the animation of GOES satellite imagery, the low pressure center moved through the Ohio Valley as the front pushed east. Ahead of the cold front was a warm front that brought in warm, unstable air from the Gulf of Mexico. As the cold front marched through it triggered the severe weather. The animation of GOES satellite imagery clearly shows the line of clouds associated with the powerful cold front moving though the Carolinas on April 16. By April 18, that line of clouds is still visible in the Atlantic Ocean, hundreds of miles off the U.S. East coast.