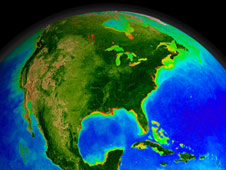 › View larger image
The SeaWiFS instrument was the first to give scientists a complete measure of the planet’s land- and water surface-based biological life from a single instrument. This image shows the gradient in both land and water-based plant life. The dark blues in the oceans represent largely chlorophyll-free zones, while the greens are highly productive regions. The red zones, such as the Chesapeake Bay, are areas where phytoplankton and algae has bloomed to harmful levels. The range of brown to dark green on land shows the difference in the U.S. between the arid west, the grassland plains and the more heavily forested east. Credit: NASA Mary Cleave left the NASA astronaut corps in the early 1990s to make a rare jump from human spaceflight to Earth science. She was going to work on an upcoming mission to measure gradations in ocean color – something she had actually seen from low-Earth orbit with her own eyes. From space, differing densities of phytoplankton and algae and floating bits of plant life reveal themselves as so many blues and greens. For Cleave, a former environmental engineer, the attraction was simple.

"We were going to measure green slime on a global scale," said Cleave, now retired from her varied NASA career.

That is exactly what SeaWiFS – Sea-viewing Wide Field-of-view-Sensor – did for over 13 years, until it recently stopped communicating with ground-based data stations and after several months of intensive efforts at recovery, was declared unrecoverable in February. This seemingly simple measurement offers a window into the oceans’ basic ability to support life. SeaWiFS’ long, well-calibrated data record gives scientists one of the best benchmarks available to study the planet’s biological response to a changing environment.

The OrbView-2 spacecraft, which carried the SeaWiFS instrument, stopped communicating with Earth-based data stations in December 2010. After several months of attempts to revive the link, GeoEye, the company that operated the spacecraft, officially ended any further attempts at recovery. SeaWiFS was NASA’s first "data buy" mission, in which a private company, Orbital Sciences, designed and built the instrument and spacecraft to NASA specifications and NASA agreed to purchase the data as long at it met its scientific requirements. Like all spacecraft, the one that carried SeaWiFS had several fundamental back-up systems, which allowed the spacecraft to operate well past its planned five-year mission life.

"The hope was to induce it to go into 'Phoenix mode' – a self-protective state, that would have allowed the ground controllers to recover the spacecraft. Unfortunately they were never able to get a return signal and without the ability to communicate with it, chances for recovery faded," said Gene Carl Feldman, SeaWiFS project manager, based at NASA's Goddard Space Flight Center, Greenbelt, Md. "Unfortunately, we'll never absolutely know what went wrong. Many people said it would never get off the ground. Some said it wouldn’t last a year. The mission was planned for five years. We got 13 years of incredible data out of this amazing little satellite."

For centuries, oceanographers were limited in their study of the highly variable and incredibly vast ocean by what they could physically sample from the deck of a slow moving ship. Like so many scientific fields, satellites changed that. The oceans, once thought homogenous and boring, have been revealed as far more dynamic, changing and varied from region to region and season to season. Quantifying this diversity in time and space would be impossible without long-operating satellites. Since its launch in 1997, SeaWiFS has been making outsized contributions to the field of observing the oceans pulse with life through changing seasons and a changing climate.

SeaWiFS was designed to measure ocean color. This seemingly narrow measurement captures the fundamental biological activity at the ocean surface, the surging and depleting life cycle of phytoplankton, the microscopic floating ocean plant life. Phytoplankton forms the base of the oceanic food web, and its abundance is a direct indicator of the seas’ ability to support life. It also plays a central role in the oceans’ carbon uptake, a key component of the planet’s climate system, particularly as the level of carbon dioxide in the atmosphere continues to increase. SeaWiFS was used to offer real-time monitoring of red tides and other harmful algae, which can bloom in polluted waters and be deadly to fish and oysters. Ocean color also offers a window into the constantly changing interplay between the ocean’s physical and chemical processes such as temperature and nutrient levels, the atmosphere and the biological life of the seas.

Feldman remembers watching the first dramatic example of SeaWiFS ability to capture this unfold. The satellite reached orbit and starting collecting data during the middle of the 1997-98 El Niño. An El Niño typically suppresses nutrients in the surface waters, critical for phytoplankton growth and keeps the ocean surface in the equatorial Pacific relatively barren.


SeaWiFS gave scientists and interested Earth observers a great range of insight into the planet and simply some brilliant views. The instrument captured both true color images of hurricanes, dust storms and ocean colors in addition to the light signature of chlorophyll concentrations that was the central purpose of the mission. Click above to see the NASA Goddard Flickr gallery of SeaWiFS images.

Then in the spring of 1998, as the El Niño began to fade and trade winds picked up, the equatorial Pacific Ocean bloomed with life, changing "from a desert to a rain forest," in Feldman’s words, in a matter of weeks. "Thanks to SeaWiFS, we got to watch it happen," he said. "It was absolutely amazing – a plankton bloom that literally spanned half the globe."

Originally designed to measure only ocean plant life, modifications made to SeaWiFS before launch allowed it to make a similar kind of measurement of plant color on land. This ability to see all of the planet’s plant life with a single, well-calibrated instrument produced a first-of-its-kind snapshot of the Earth’s biosphere in 1998. Then-Vice President Al Gore was so impressed he asked for a poster of the image to hang in his office, Feldman said.

From the broadest perspective, Feldman sees this measurement as an observation of what makes Earth different from all the other celestial bodies NASA studies. "None of the other planets we have studied so far seem to have the combination of factors that result in life. We do. That SeaWiFS image of the global biosphere is the picture of the things that set us apart."

But the mission’s lasting contribution will no doubt be its study of the life of the oceans. This record stretches over a long enough period to produce a critical record of both natural variability and the planet’s biological response to a changing climate.

Given the length and breadth of the SeaWiFS data record, it may help oceanographers test this question of just how resilient the oceans are. SeaWiFS has observed a decline in plant life productivity in some of the larger "gyres," large-scale ocean current patterns, said Jim Yoder, a senior scientist at Woods Hole Oceanographic Institute, Woods Hole, Mass. who also worked on ocean color at NASA in two different stints in the 1980s and 1990s. It’s the kind of observation over time a satellite can make, and it has created a debate in ocean science circles about whether this is a natural cycle or an effect of climate change.

"Everyone who looks at the data sees the decline, it’s just a question of why," Yoder said. "This has set off a lot of interest and debate. The climate implication would be the global ocean is declining in productivity due to increasing temperatures, which suppresses nutrients so there is less phytoplankton. Is it a cycle or is it a trend? Part of SeaWiFS’ legacy may be related to trying to resolve this. You can’t do that if your global change data has gaps between years and different satellites."

Cleave, a Space Shuttle astronaut who had been an environmental engineer with the Utah Water Research Laboratory before joining the astronaut corps, is one of the few people to have seen ocean color gradations from space with her own eyes.

"It really is amazing and beautiful," said, Cleave, who worked as SeaWiFS project manager for much of the 1990s before becoming NASA’s Associate Administrator for the Science Mission Directorate, NASA Headquarters, Washington. She retired in 2007. "You can see plants growing in the ocean, which is basically what ocean color is. Particularly around the mouths of big, dirty rivers."

Cleave was drawn to questions about both ocean and land plants’ role in the global carbon cycle. How much carbon dioxide were the aquatic plants drawing from the atmosphere for photosynthesis? How much were land plants using? Before SeaWiFS, this fundamental question wasn’t answered. With its ability to measure both land and ocean primary productivity, SeaWiFS also revealed to scientists the balance between the two as a percentage of global plant life.

NASA continues to make ocean color measurements with its MODIS (MODerate resolution Imaging Spectroradiometer) instruments. Others have followed on in recognizing the importance of ocean color observations both for understanding the global carbon cycle and more immediate societal benefits such as monitoring harmful algae and helping commericial fisheries locate potential feeding grounds. Since the launch of SeaWiFS, the Indian Space Research Organization has launched its Oceansat satellites and the European Space Agency launched Envisat, which measures ocean color with its MERIS (Medium-resolution Imaging Spectrometer) instrument.

Yoder said SeaWiFS has made great contributions, but its ultimate legacy remains unwritten. Scientists will likely use its data record for decades, both for new research and as a baseline to measure the biosphere’s response to climate change.

"It’s hard to pin this down, but it changed the field of biological productivity from one that focused on individual bays or estuaries. It changed the field from a local to global perspective. Until then you didn’t have that ability."

Said Feldman, "The international scientific community certainly could not have asked for a more tenacious little spacecraft and instrument that has served us so well for the past 13-plus years. There is no question that the Earth is changing. SeaWiFS enabled us for the first time to monitor the biological consequences of that change - to see how the things we do, and how natural variability, affect the Earth's ability to support life."