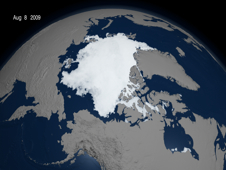 > Click to view visualization (8 Mb)
Sea ice cover reaches its minimum extent at the end of each summer. This animation shows the summer retreat of sea ice over the Arctic from July 1 through September 12, as recorded by the AMSR-E instrument on NASA's Aqua satellite. Credit: Cindy Starr and Trent Schindler, NASA Scientific Visualization Studio U.S. satellite measurements show Arctic sea ice extent in 2009 – the area of the Arctic Ocean covered by floating ice – was the third lowest since satellite measurements were first made in 1979. The ice area at minimum was an increase from the past two years, but still well below the average for the past 30 years.

NSIDC is sponsored by several U.S. government agencies, including NASA. Ice data are derived from measurements made by U.S. Department of Defense and NASA satellites, with key work in interpreting the data and developing the 30-year history done by scientists at NASA's Goddard Space Flight Center in Greenbelt, Md.

"The changes from year to year are interesting since there has been large variability," said Josefino Comiso, a sea ice expert at NASA Goddard. "But we need to look at several years of data to examine the long-term trends." 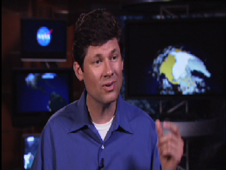 > Click to view close captioned video
Tom Wagner, NASA's cryosphere program manager, describes the shrinking of Arctic sea ice and the significance of the problem for the rest of the planet. Credit: Jefferson Beck, NASA "Our three decades of continuous satellite measurements show a rapid decline of about 11.6 percent per decade," Comiso said. Arctic sea ice has declined about 34 percent since measurements were first made in the late 1970s.

The four lowest ice extents on record have occurred between 2005 and 2009, with the record minimum reached during a dramatic drop in ice cover in 2007 that was exacerbated by unusual polar winds.

Several recent studies based on data from NASA’s ICESat and QuikScat satellites have shown that, in addition to shrinking geographic ice coverage, the amount of multi-year ice cover – thicker ice that survives more than one summer -- has been declining in recent years.

"The oceans are crucial to Earth's climate system, since they store huge amounts of heat," said Comiso. "Changes in sea ice cover can lead to circulation changes not just in the Arctic Ocean, but also in the Atlantic and Pacific oceans. If you change ocean circulation, you change the world's climate." 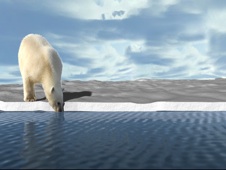 > Click to view movie
Each winter existing sea ice thickens and new, thinner ice is formed. This conceptual animation shows a cutaway view of the seasonal advance and retreat of Arctic sea ice, demonstrating the current trend toward a thinning ice pack, with less of the thicker multi-year ice surviving each summer's melt. Credit: Megan Willy, UMBC Changes in the Arctic ice cover could also mean a new paradigm for life in the sea. "The waters at high latitudes are some of the most biologically productive in the world because of the presence of sea ice," Comiso added. "Many of our richest fisheries are the seas around the Arctic Ocean, and we don't know what the consequences might be if the seasonal sea ice disappears in these regions."