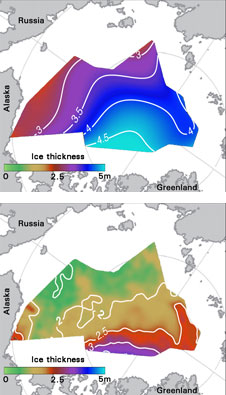 > View larger image
Patterns of average winter ice thickness from February to March show thicker ice in 1988 (above), compared to thinner ice averaged from 2003-2008 (below). Thickness information in Antarctica is limited to an irregular polygon shape that outlines the area where declassified submarine data are available. Credit: Ronald Kwok/NASA This summer, a group of scientists and students — as well as a Canadian senator, a writer, and a filmmaker — set out from Resolute Bay, Canada, on the icebreaker Louis S. St-Laurent. They were headed through the Northwest Passage, but instead of opening shipping lanes in the ice, they had gathered to open up new lines of thinking on Arctic science.

Among the participants in the shipboard workshop (hosted by Fisheries and Oceans Canada) was Ron Kwok of NASA's Jet Propulsion Laboratory in Pasadena, Calif. Kwok has long provided checkups on the health of Arctic sea ice — the frozen sea water floating within the Arctic Ocean basin. He also knows that some important clues about ice changes can't be seen from a ship.

While satellites provide accurate and expansive coverage of ice in the Arctic Ocean, the records are relatively new. Satellites have only monitored sea ice extent since 1973. NASA's Ice, Cloud, and land Elevation Satellite (ICESat) has been on the task since 2003, allowing researchers to estimate ice thickness as well.

To extend the record, Kwok and Drew Rothrock of the University of Washington, Seattle, recently combined the high spatial coverage from satellites with a longer record from Cold War submarines to piece together a history of ice thickness that spans close to 50 years.

Analysis of the new record shows that since a peak in 1980, sea ice thickness has declined 53 percent. "It's an astonishing number," Kwok said. The study, published online August 6 in Geophysical Research Letters, shows that the current thinning of Arctic sea ice has actually been going on for quite some time.

"A fantastic change is happening on Earth — it's truly one of the biggest changes in environmental conditions on Earth since the end of the ice age," said Tom Wagner, cryosphere program manager at NASA Headquarters. "It's not an easy thing to observe, let alone predict, what might happen next."

Sea ice influences the Arctic's local weather, climate, and ecosystems. It also affects global climate. As sea ice melts, there is less white surface area to reflect sunlight into space. Sunlight is instead absorbed by the ocean and land, raising the overall temperature and fueling further melting. Ice loss puts a damper on the Arctic air conditioner, disrupting global atmospheric and ocean circulation. 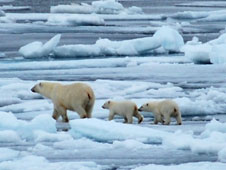 > View larger image
Changes to sea ice influence the Arctic's local weather, climate and ecosystems -- and also polar bears, seen here from an icebreaking ship that passed though the Northwest Passage this summer during an eight-day series of meetings to discuss Arctic science. Credit: Ronald Kwok/NASA To better identify what these changes mean for the future, scientists need a long-term look at past ice behavior. Each year, Arctic ice undergoes changes brought about by the seasons, melting in the summer warmth and refreezing in the cold, dark winter. A single extreme melt or freeze season may be the result of any number of seasonal factors, from storminess to the Arctic Oscillation (variations in atmospheric circulation over the polar regions that occur on time scales from weeks to decades).

But climate is not the same as weather. Climate fluctuates subtly over decades and centuries, while weather changes from day to day and by greater extremes.

"We need to understand the long-term trends, rather than the short-term trends that could be easily biased by short-term changes," Kwok said. "Long-term trends are more reliable indicators of how sea ice is changing with the global and regional climate."

That's why a long-term series of data was necessary. "Even decadal changes can be cyclical, but this decline for more than three decades does not appear to be cyclical," Rothrock said.

All the Ice Counts

Arctic sea ice records have become increasingly comprehensive since the latter half of the 20th century, with records of sea ice anomalies viewed from satellites, ships, and ice charts collected by various countries. Most of that record, kept in the United States by the National Snow and Ice Data Center at the University of Colorado, Boulder, describes the areal extent of sea ice.

But a complete picture of sea ice requires an additional, vertical measurement: thickness. Melting affects more than just ice area; it can also impact ice above and below the waterline. By combining thickness and extent measurements, scientists can better understand how the Arctic ice cover is changing.

Kwok and other researchers used ICESat’s Geoscience Laser Altimeter System to estimate the height of sea ice above the ocean surface. Knowing the height, scientists can estimate how much ice is below the surface.

Buoyancy causes a fraction (about 10 percent) of sea ice to stick out above the sea surface. By knowing the density of the ice and applying "Archimedes' Principle" — an object immersed in a fluid is buoyed by a force equal to the weight of the fluid displaced by the object — and accounting for the accumulation of snowfall, the total thickness of the ice can be calculated.

In 2008, Kwok and colleagues used ICESat to produce an ice thickness map over the entire Arctic basin. Then in July 2009, Kwok and colleagues reported that multiyear 'permanent' ice in the Arctic Ocean has thinned by more than 40 percent since 2004. For the first time, thin seasonal ice has overtaken thick older ice as the dominant type.

To put the recent decline in context, Kwok and Rothrock examined the recent five-year record from ICESat in the context of the longer history of ice thickness observed by U.S. Navy submarines.

During the Cold War, the submarines collected upward-looking sonar profiles, for navigation and defense, and converted the information into an estimate of ice thickness. Scientists also gathered profiles during a five-year collaboration between the Navy and academic researchers called the Scientific Ice Expeditions, or "SCICEX," of which Rothrock was a participant. In total, declassified submarine data span nearly five decades—from 1958 to 2000—and cover a study area of more than 1 million square miles, or close to 40 percent of the Arctic Ocean.

Kwok and Rothrock compared the submarine data with the newer ICESat data from the same study area and spanning 2003 to 2007. The combined record shows that ice thickness in winter of 1980 averaged 3.64 meters. By the end of 2007, the average was 1.89 meters.

"The dramatic decrease in multiyear ice coverage is quite remarkable and explains to a large degree the decrease in total ice area and volume," Kwok said.

Rothrock, who has worked extensively with the submarine data, agrees. "This paper shows one of the most compelling signals of global warming with one of the greatest and fastest regional environmental impacts."

While it is critical to keep monitoring the Arctic with satellites and aircraft, Kwok believes there is also a benefit in physically standing in a place and seeing the changes through human eyes—particularly for non-scientists, who do not keep a close watch on sea ice.

The August 2009 workshop in the Northwest Passage brought together an eclectic group of politicians, artists, and scientists to see the ice firsthand. The challenge was to see the problem of a changing Arctic environment from a variety of scientific, political, cultural and human perspectives and to discuss the future of collaborative study in the Arctic. The science of sea ice has implications for people’s livelihoods, for long-established ecosystems, and for opening a new part of the world to exploration and exploitation.

The workshop participants now take their experiences and observations back to warmer climates, where there is sometimes less urgency about ice retreat.

"Sea ice is about more than just hard science; it's a geopolitical and human issue," Kwok noted. "There is a big personal impact when you get away from your desk and see it in person."