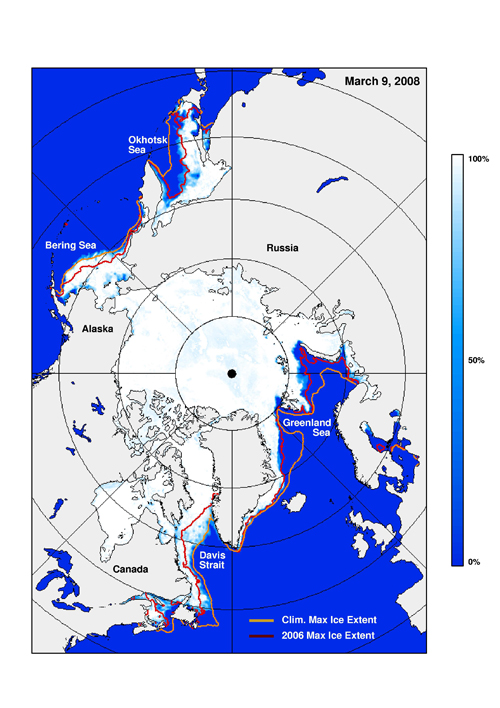 Figure 1 -- This ice concentration map dated March 9, 2008, indicates maximum ice extent in the Northern Hemisphere and the contour of the ice edge in 2006 (when the maximum extent was least extensive during the satellite era) is shown in red while that for the 28-year average is shown in gold. > High resolution image Credit: NASA 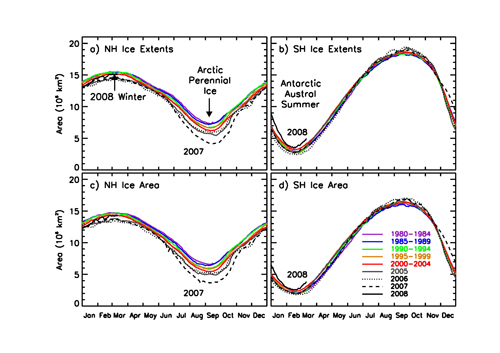 Figure 2 -- Five-year averages of daily ice extents are shown in (a) Northern and (b) Southern Hemispheres and daily ice area in (c) Northern and (d) Southern Hemispheres for the period 1980 to 2004 and for individual years from 2007 to 2008. The winter data in the Arctic in 2008 (solid black line) is shown to be higher than those of the previous three years but lower than the five-year averages from 1980 to 2004. The data from an especially cold summer in the Antarctic in 2008 is shown to be significantly higher than those of other years indicating the effect of a cooling period as well that appears to have started in November 2007. The perennial ice is the ice cover at the end of the summer and is shown to be progressively declining in the Arctic with overall amount in 2007 confirmed here as drastically lower than those of other years. > High resolution image Credit: NASA 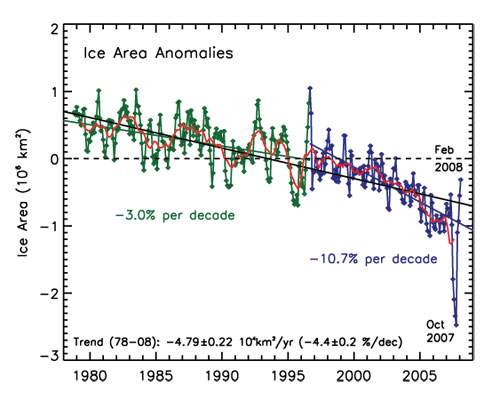 Figure 3 -- Monthly irregularities in ice area from November 1978 to February 2008 are shown. The overall trend is -4.4 percent per decade but there appears to be an acceleration in the decline from 1996 to 2008. The trend from 1978 to 1996 (in green) is shown to be -3 percent per decade while that from 1996 to 2008 (in blue) was -10.7 percent per decade. The last three data points represent the winter months of December 2007, January 2008 and February 2008 and are shown to be all below the zero anomaly line, indicating that the values are still less than the average value. The addition of the three data points did not significantly alter the trend. > High resolution image Credit: NASA 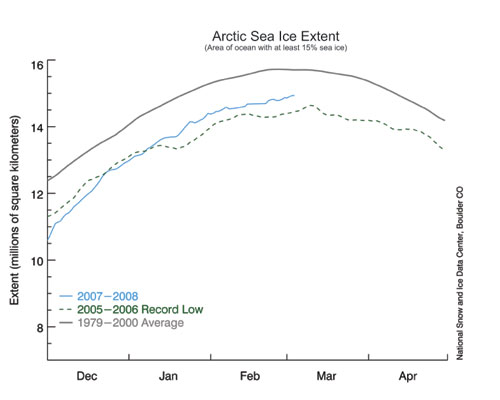 Figure 4 -- Daily timeseries of total Arctic sea ice extent (defined as the region covered by at least 15 percent ice). The ice growth through the winter has been faster than in some recent years and the extent has been above the previous lowest winter amounts that occurred during 2005-2006. However, the sea ice extent is still well below the long-term average (1979-2000), by about 250,000 square miles, an area nearly the size of the state of Texas. While the ice extent may continue growing for a little while longer, the maximum winter extent is being neared and this will clearly be a winter with well below normal ice extent. > High resolution image Credit: National Snow and Ice Data Center 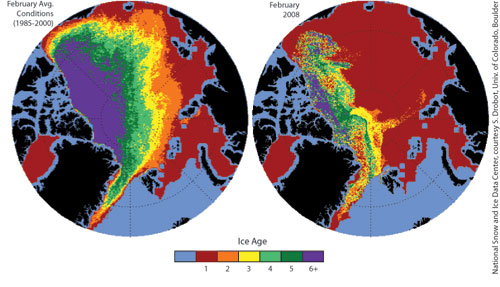 Figure 5 -- Left: February ice age distribution in the Arctic during normal conditions (1985-2000 average). Right: February 2008 Arctic ice age distribution. The ice in the Arctic is much younger than normal, with vast regions now covered by first-year ice (ice that has formed since last summer’s melt) and much less area covered by multiyear ice (ice that has survived at least one melt season). Ice that is 6 years old or older shows an even more dramatic decrease in 2008 compared to average conditions. Ice age is a good indicator of general ice thickness, with older ice thicker on average than younger ice. First-year ice generally ranges between about 3-5 feet thick, while multiyear ice averages about 8-10 feet; old ice that has survived several melt seasons can easily be 12-15 feet thick. > High resolution image Credit: NSIDC, Courtesy S. Drobot, University of Colorado, Boulder 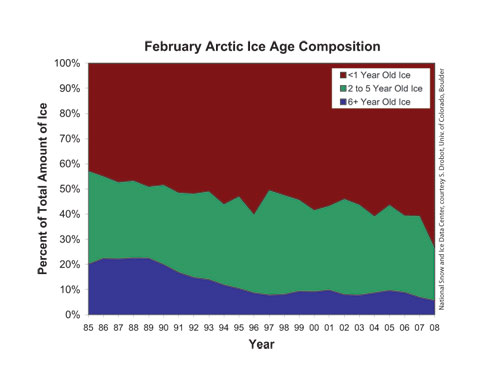 Figure 6 -- Timeseries of ice age showing the proportional composition of the total ice area covered by ice of different ages. Multiyear (2-5 year old and 6+ year old, green and blue colors) ice once covered over 50 percent of the Arctic, but in 2008 accounts for less than 30 percent. Old ice (in blue) once covered over 20 percent of the area of the Arctic, but now only covers about 6 percent. The proportion of first-year ice has increased from about 50 percent during the 1980s and 1990s to over 70 percent in 2008. > High resolution image Credit: NSIDC, data from S. Drobot, J. Maslanik, and C. Fowler, University of Colorado, Boulder 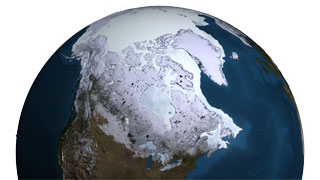 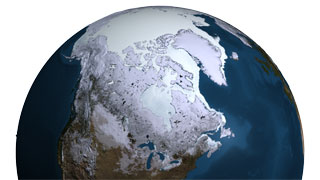 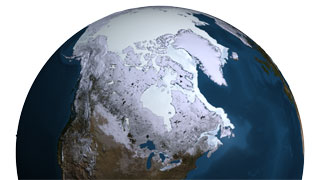 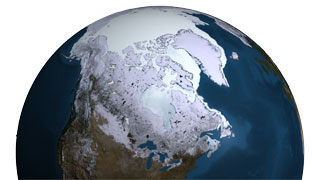 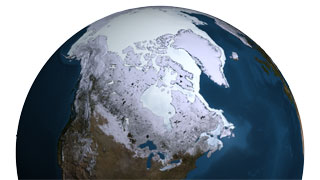 Every year the sea ice in the Arctic reaches its maximum extent in the Northern hemispheric winter, usually in mid-to-late March. These five images show the sea ice maxima for each of the past five years. The AMSR-E instrument on NASA's Aqua satellite provided the data for these images. 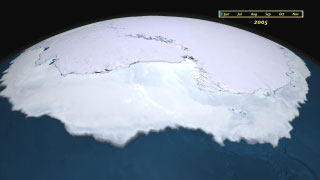 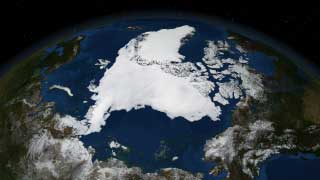 Figure/visualization 13 -- The Advanced Microwave Scanning Radiometer (AMSR-E) is a high-resolution passive microwave Instrument on NASA's Aqua satellite. AMSR-E provides a remarkably clear view of sea ice dynamics in greater detail than has ever been seen before. Researchers use this information to study polar bear habitats, plan expeditions to the ice, and to study the interactions between the ocean and sea ice from season to season. This data visualization shows Arctic sea ice from Jan. 1, 2007 to Sept. 16, 2007.
> Click to view streaming Windows Media Viewer animation
> Click to download .mpg file (15 Mb)
> Click for a print resolution still TIF Credit: NASA 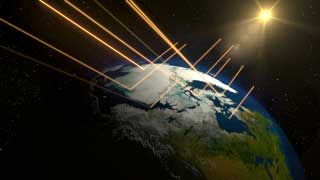 Figure/animation 14 -- Polar ice reflects light from the sun. As this ice begins to melt, less sunlight gets reflected into space. It is instead absorbed into the oceans and land, raising the overall temperature, and fueling further melting. This results in a positive feedback loop called ice albedo feedback, which causes the loss of the sea ice to be self-compounding. The more it disappears, the more likely it is to continue to disappear.
> Click to view streaming Windows Media Viewer animation
> Click to download .mpg file (26.7 Mb) Credit: NASA 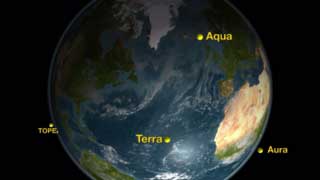