Researchers Say Arctic Sea Ice Still at Risk Despite Cold Winter
Using the latest satellite observations, NASA researchers and others report that the Arctic is still on “thin ice” when it comes to the condition of sea ice cover in the region. A colder-than-average winter in some regions of the Arctic this year has yielded an increase in the area of new sea ice, while the older sea ice that lasts for several years has continued to decline. 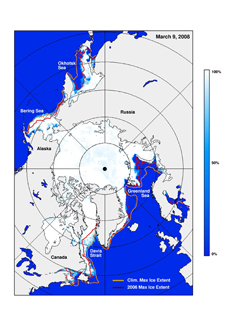 This ice concentration map dated March 9, 2008, indicates maximum ice extent in the Northern Hemisphere. The contour of the ice edge in 2006 is shown in red, while that for the 28-year average is shown in gold. Click image to enlarge. Credit: NASA On March 18 the scientists said they believe that the increased area of sea ice this winter is due to recent weather conditions, while the decline in perennial ice reflects the longer-term warming climate trend and is a result of increased melting during summer and greater movement of the older ice out of the Arctic.

Perennial sea ice is the long-lived, year-round layer of ice that remains even when the surrounding short-lived seasonal sea ice melts away in summer to its minimum extent. It is this perennial sea ice, left over from the summer melt period, that has been rapidly declining from year to year, and that has gained the attention and research focus of scientists. According to NASA-processed microwave data, whereas perennial ice used to cover 50-60 percent of the Arctic, this year it covers less than 30 percent. Very old ice that remains in the Arctic for at least six years comprised over 20 percent of the Arctic area in the mid to late 1980s, but this winter it decreased to just six percent.

According to Walt Meier of the National Snow and Ice Data Center at the University of Colorado, Boulder, as ice ages it continues to grow and thicken, so that older ice is generally also thicker ice. This winter the ice cover is much thinner overall and thus in a more vulnerable state heading into the summer melt season. NASA’s ICESat satellite has contributed to understanding of the changes in ice thickness. To get a better understanding of the behavior of sea ice, NASA is planning a follow-on satellite mission, ICESat II, to launch in 2015.

Arctic sea ice grows and declines seasonally, ranging from an average minimum extent in September of 2.5 million square miles to an average winter maximum extent of 5.9 million square miles in March. This March, instruments on NASA’s Aqua satellite and NOAA and U.S. Defense Department satellites showed the maximum sea ice extent slightly increased by 3.9 percent over that of the previous three years, but it is still below the long-term average by 2.2 percent. Increases in ice extent occurred in areas where surface temperatures were colder than the historical averages. At the same time, as a result of the export of ice from the Arctic, the area of perennial ice decreased to an all-time minimum.

The ice in the Arctic is much younger than normal, with vast regions now covered by first-year ice and much less area covered by multiyear ice. Left: February distribution of ice by its age during normal Arctic conditions (1985-2000 average). Right: February 2008 Arctic ice age distribution. Click image to enlarge. Credit: NSIDC Joey Comiso of NASA's Goddard Space Flight Center in Greenbelt, Md., the lead author of a 2007 related study, used data from NASA's passive microwave data set to establish that the perennial ice cover at the summer Arctic ice minimum in 2007 was about 40 percent less than the 28-year average. According to the latest observations from the National Snow and Ice Data Center (an organization partially funded by NASA), perennial sea ice dropped from about 40 percent of the total ice pack last year to 30 percent of total ice this winter. The perennial ice is also growing younger, meaning that it is thinner and will be more vulnerable during the summer melt period.

In light of the Arctic’s cold spell this winter, NASA satellites and scientists will continue to carefully watch conditions in the Arctic Ocean as summer settles in to better determine the extent of the perennial sea ice.