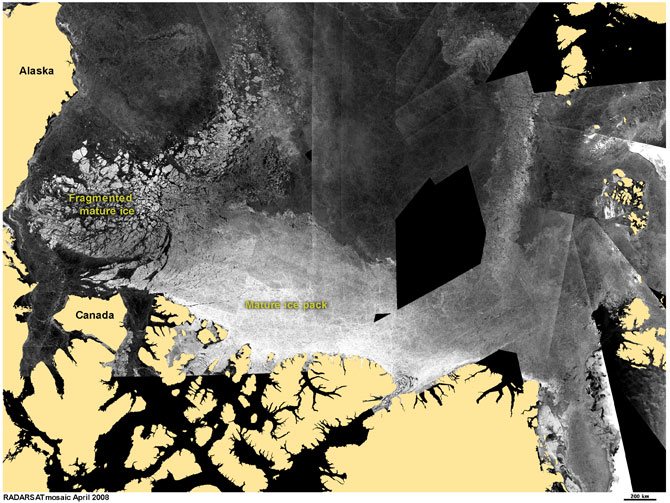 › View larger
› Unlabeled version
A mosaic of satellite images show the movement of fragmented ice away from ice edge, which scientists use to track the loss of multiyear ice due to melt. Credit: NASA Earth Observatory

A NASA analysis of satellite data quantified for the first time the amount of older and thicker "multiyear" sea ice lost from the Arctic through melt.

Since the start of the satellite record in 1979, scientists have observed the continued disappearance of older "multiyear" sea ice that survives more than one summer melt season. Some scientists suspected that this loss was due entirely to wind pushing the ice out of the Arctic Basin -- a process that scientists refer to as "export." In this study, Ron Kwok and Glenn Cunningham at NASA's Jet Propulsion Laboratory in Pasadena, Calif., used a suite of satellite data to clarify the relative role of export versus melt within the Arctic Ocean.

› View larger
Maps of multiyear sea ice coverage of Arctic Ocean on April 30, 2008 (left) and again on Nov. 30, 2008 (right) show a large area of fragmented multiyear ice in the Beaufort Sea disappears after ice pack reached its annual summer minimum extent. Credit: NASA Earth Observatory "The paper shows that there is indeed melt of old ice within the Arctic basin and the melt area has been increasing over the past several years," Kwok said. "The story is always more complicated -- there is melt as well as export -- but this is a another step in calculating the mass and area balance of the Arctic ice cover."

The results have implications for understanding how Arctic sea ice gets redistributed, where melt occurs in the Arctic Ocean and how the ocean, ice and atmosphere interact as a system to affect Earth's climate. The study was published October 2010 in Geophysical Research Letters.

Scientists track the annual cycle of Arctic sea ice coverage as it melts through the summer to reach a minimum extent each September, before refreezing through fall and winter. Much of that ice is seasonal, meaning that it forms and melts within the year.

But multiyear ice that survives more than one season has also been declining, as noted in previous work by Joey Comiso of NASA's Goddard Space Flight Center in Greenbelt, Md., who shows a loss of about 10 percent per decade since the beginning of the satellite record in 1979. Scientists want to know where this loss is occurring.

"The decline of the multiyear ice cover of the last several decades has not been quantitatively explained," Kwok said.

To investigate the loss of multiyear ice, Kwok and Cunningham looked at a 17-year span of data from 1993 to 2009 from a range of polar-observing satellites and instruments including NASA's Quick Scatterometer (QuikScat); the Ice, Cloud and land Elevation Satellite (ICESat); the Advanced Microwave Scanning Radiometer (AMSR); and the European Space Agency's ERS-1 and ERS-2. Some instruments track ice coverage, while others track motion and concentration.

The team collected satellite images and tracked pixels of multiyear ice from April 1, prior to the onset of seasonal melt, and into the summer. Pixels that deviate away from images of the ice edge were considered lost to melt.

They found that over the 17-year period, an area of 947,000 square kilometers (365,639 square miles), or about 32 percent of the decline in multiyear sea ice area, was lost in the Beaufort Sea due to melt.

A similar calculation using thickness estimates from NASA's ICESat from 2004 to 2009 show a volume loss of 1,400 cubic kilometers (336 cubic miles), or about 20 percent of the total loss by volume.

How and where multiyear ice is lost has impacts on the Arctic system. For example, more loss by melt means more freshwater remains in local Arctic waters rather than being transported southward.

"These results also show that thick multiyear sea ice is not immune to melt in the Pacific sector of the Arctic Ocean in today’s climate," Kwok said.

The additional freshwater from melt in the Pacific sector, which encompasses the area of study, could contribute to the freshening of the Beaufort Gyre and potentially influence circulation, but the degree of that influence remains uncertain.

Not all of the multiyear ice loss is accounted for, however. Ice loss through Fram Strait and from melt from 2005 to 2008 accounts for just 52 percent of total ice loss. The team suggests that melt in other Arctic regions and outflow through other passages besides Fram Strait could account for the difference.