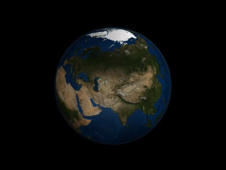 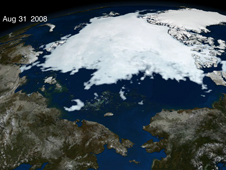 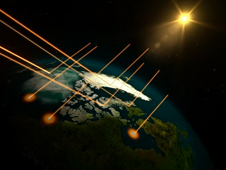 Animation showing how polar ice reflects light from the sun. As this ice begins to melt, less sunlight gets reflected into space. It is instead absorbed into the oceans and land, raising the overall temperature, and fueling further melting.
Credit: NASA's Conceptual Image Lab
> Watch 512x280 animation
> Watch 1280x720 animation
Following a record-breaking season of arctic sea ice decline in 2007, NASA scientists have kept a close watch on the 2008 melt season. Although the melt season did not break the record for ice loss, NASA data are showing that for a four-week period in August 2008, sea ice melted faster during that period than ever before.

Each year at the end of summer, sea ice in the Arctic melts to reach its annual minimum. Ice that remains, or "perennial ice," has survived from year to year and contains old, thick ice. The area of arctic sea ice, including perennial and seasonal ice, has taken a hit in past years as melt has accelerated. Researchers believe that if the rate of decline continues, all arctic sea ice could be gone within the century.

"I was not expecting that ice cover at the end of summer this year would be as bad as 2007 because winter ice cover was almost normal," said Joey Comiso of NASA's Goddard Space Flight Center in Greenbelt, Md. "We saw a lot of cooling in the Arctic that we believe was associated with La Niña. Sea ice in Canada had recovered and even expanded in the Bering Sea and Baffin Bay. Overall, sea ice recovered to almost average levels. That was a good sign that this year might not be as bad as last year."

The 2008 sea ice minimum was second to 2007 for the record-lowest extent of sea ice, according to a joint announcement Sept. 16 by NASA and the University of Colorado's National Snow and Ice Data Center (NSIDC) in Boulder, Colo. As of Sept. 12, 2008, the ice extent was 1.74 million square miles. That's 0.86 million square miles below the average minimum extent recorded from 1979 to 2000, according to NSIDC.

Contributing to the near-record sea ice minimum in 2008 was a month-long period in the summer that saw the fastest-ever rate of seasonal retreat during that period. From August 1 to August 31, NASA data show that arctic sea ice extent declined at a rate of 32,700 square miles per day, compared to a rate of about 24,400 square miles per day in August 2007. Since measurements began, the arctic sea ice extent has declined at an average rate of 19,700 miles per day at the point when the extent reaches its annual minimum.

Observations of changes to sea ice over time are possible due to a 30-year record of data from NASA and other agency satellites, including Nimbus-7, Aqua, Terra and the Ice, Cloud, and land Elevation Satellite (ICESat).

Researchers say that the recent seasonal acceleration could be in part due to conditioning going on in the Arctic. For example, research by Jennifer Kay of the National Center for Atmospheric Research in Boulder, Colo., and colleagues reported this April in Geophysical Research Letters that reduced cloud cover in 2007 allowed more sunlight to reach Earth, contributing to a measureable amount of sea ice melt at the surface. Reduced cloud cover also contributed to warmer ocean surface temperatures that led to melting of the ice from below.

"Based on what we've learned over the last 30 years, we know that the perennial ice cover is now in trouble," Comiso said. "You need more than just one winter of cooling for the ice to recover to the average extent observed since the measurements began. But the trend is going the other way. A warming Arctic causes the surface water to get warmer, which delays the onset of freeze up in the winter and leads to a shorter period of ice growth. Without the chance to thicken, sea ice becomes thinner and more vulnerable to continued melt."