Forests are viewable on the first high-resolution, satellite-based global map of mangroves in green in areas along coastlines and around bodies of water, and exist most prominently in Asia. Credit: Chandra Giri/USGS.
› Larger image
Countless people clung to life in the branches of trees hemming the shorelines during the deadly 2004 tsunami that killed more than 230,000 coastal residents in Indonesia, India, Thailand and Sri Lanka. In the aftermath of the disaster, land change scientist Chandra Giri from the U.S. Geological Survey (USGS) decided to explore to what degree those unique trees – which make up valuable forest ecosystems called mangroves -- safeguard lives, property and beaches during hurricanes, tsunamis and floods. 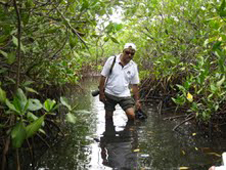 Chandra Giri was knee deep in the Saloum River in Senegal on July 21, 2010. The area is dominated by the Rhizophora species of mangrove forests. Credit: Chandra Giri/USGS Encountering challenges while trying to quantify the long-standing hypothesis compelled Giri and an international team of scientists to take a more roundabout and ultimately more viable research path: to first describe the distribution and magnitude of the area mangrove ecosystems cover. With funding from NASA, that path yielded the first high-resolution, satellite-based global map of mangrove forests. Published online this summer in the Journal of Global Ecology and Biogeography, the map revealed worrisome facts about these treasure troves for biodiversity: they make up less of the Earth’s surface than previously thought. This new information, Giri says, coupled with other reports that mangrove forests are vanishing faster than scientists' previous estimates, can provide motivation and evidence for stronger conservation efforts.

Recently Giri was interviewed about his research from his office in Sioux Falls, S.D.

Why were mangroves important as a focus of your initial study, and why did you change gears to a great degree from your initial approach?

Like others around the world, I watched TV news reports six years ago showing lives and property saved by mangroves during the tsunami. I had an epiphany; these trees really do have a role to play as a protective barrier against some natural disasters, and just maybe the extent of that role can be measured in some way.

We knew that mangroves are extremely precious as a robust habitat, refuge and food source for hundreds of wildlife species as well as for humans. And they store a disproportionately greater amount of terrestrial carbon than a lot of other ecosystems. They’re clearly an important ecosystem when it comes to biodiversity. But no one has systematically assessed the forests as disaster protection with hard data at a broader scale.

Doing so posed challenges we hadn’t anticipated. Proving scientifically that mangrove forests can protect lives and property requires a hard look at factors like socioeconomic data, local topography, mangrove health, and the distance between forests and villages that are considered “hotspots” for extreme weather events. Some data for the tsunami impacted countries in Asia is readily available, while some isn’t.

The challenges slowed us down, but forced us to look for different means of gathering data and new angles from which to analyze mangroves.

How much of the Earth’s surface is covered by mangrove forests, and how do you know they are disappearing more rapidly than scientists expected?

Our new map suggests that mangroves cover about 53,190 square miles of the surface of the planet. That’s about 12 percent less than scientists estimated in previous studies! That’s troubling when combined with the growing concern that, according to the International Union for the Conservation of Nature, 16 percent of mangrove species are in danger of extinction, and, according to the Millennium Ecosystem Assessment, a whopping 35 percent of mangrove ecosystems disappeared between 1980 and 2000. That decline is mostly due to agricultural expansion, urban development and shrimp farming.

Specifically, the map reveals seventy-five percent of the forests are concentrated in only 15 countries, with the rest scattered across the globe more sparsely. We found that 118 countries are home to mangroves, with most in Asia and Africa (42 percent and 21 percent, respectively), 15 percent in North America and Central America, 12 percent spread across the Pacific islands, and 11 percent in South America.

Can you explain why yours is the first satellite-derived map of the world’s mangroves, even though satellite monitoring of Earth has been pretty advanced for years?

Previously, mangroves were not mapped by global land cover initiatives because they used resolutions that just weren't fine enough across small geographical areas, and Landsat satellite mapping was expensive and cumbersome. For years Landsat data was about $250 or more for an image.

Extensive image collections were off limits for a lot of scientists who depended on external research funding for their work. Our eventual map required more than 1,000 satellite images, a price tag that would have been at least $250,000.

That all changed about three years ago, when Global Land Survey data were made available and USGS made Landsat data free for the first time. At the same time, computing facilities have improved so that we can now handle large volumes of data. This opened a new door for us into approaching our scientific analysis of mangroves from another perspective – from space, by way of highly detailed satellite images.

This advancement is arguably an improvement over alternative estimates of mangroves. For example, the United Nations (UN)has generated higher estimates but they’re partly based on responses to a questionnaire to each country asking how many mangrove forests they have. Country responses are all over the map, so to speak.

Creating a global map of any aspect of the Earth’s surface sounds like a painstaking process. What steps did you take to create the mangrove map?

Mangroves are largely identifiable in false-color Landsat images – appearing distinctly in a shade of dark red near a shoreline or adjacent to a body of water that sets them apart from other types of land surfaces. We used that shade as the signature for the presence of mangroves in the images.

Satellites capture imagery of Earth with varying degrees of resolution, similar to pixel sizes on a television screen. In past years, scientists have typically viewed global land cover in individual pixels, or snapshots, spanning 1 square kilometer (.62 square miles) in area. There’s not sufficient enough detail visible at that resolution to detect mangroves. Our technique involves use of data at a finer resolution – each picture is an area that’s just 30 square meters (32 square yards) – making it easy to classify mangroves’ that are often found in small patches.

We invited scientists from South America, Africa, India, and Asia – who stayed at our facility here in Sioux Falls up to 6 months each during our project period between 2007 and 2009 – to use our methodology to pore over and analyze the Landsat image data to help slowly piece together the mangrove map. To validate what we saw in images as mangrove forests, our team also collected and used field data, news reports, scientific publications, and Google images of each region.

Does the new map and estimates of mangroves bring you and other scientists closer to understanding the significance of mangroves as protective barriers against extreme weather events like tsunamis?

This has been a stepping stone to looking back at our original question. We have to first know where mangroves exist, their density, and more about their rate of change to do the additional legwork regarding their protective role. We would have otherwise been putting the cart before the horse.

We know the Asia-Pacific region, Indonesia in particular, has the most mangrove forests. From UN and other reports, we also know Asia is the region most at risk from deadly natural disasters like the tsunami. So, we’re better positioned to investigate mangroves’ value as armor against them, and to help substantiate conservation efforts in the region to stem the forests’ decline.

We also expect scientists to pair our Landsat-based estimates with other remote sensing measurements in the future like lidar, to estimate height and biomass of mangroves to generate more precise estimates of mangrove conditions. Gretchen Cook-Anderson
NASA’s Earth Science News Team
› Back To Top