The research voyage is part of a multi-year mission called the Salinity Processes in the Upper Ocean Regional Study (SPURS). The new data also will help calibrate the salinity measurements NASA's Aquarius instrument has been collecting from space. SPURS scientists aboard the research vessel Knorr leave Sept. 6 from Woods Hole. The researchers will spend about three weeks deploying instruments and taking measurements before sailing to the Azores to complete the voyage on Oct. 9. For more information on SPURS, contact Steve Cole at stephen.e.cole@nasa.gov or Stephanie Murphy at samurphy@whoi.edu. 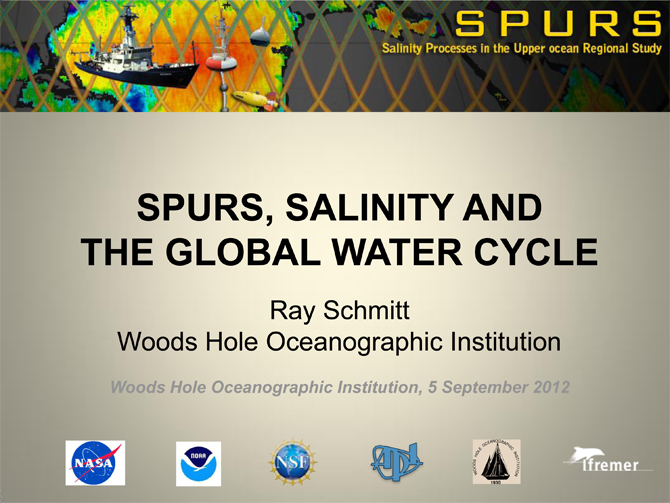 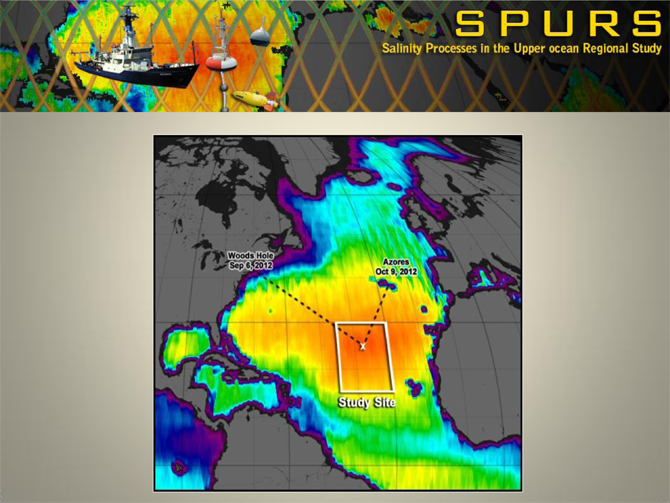 The Salinity Processes in the Upper Ocean Regional Study (SPURS) research cruise will study a spot known as the Atlantic surface salinity maximum, located halfway between the Bahamas and the western coast of North Africa. 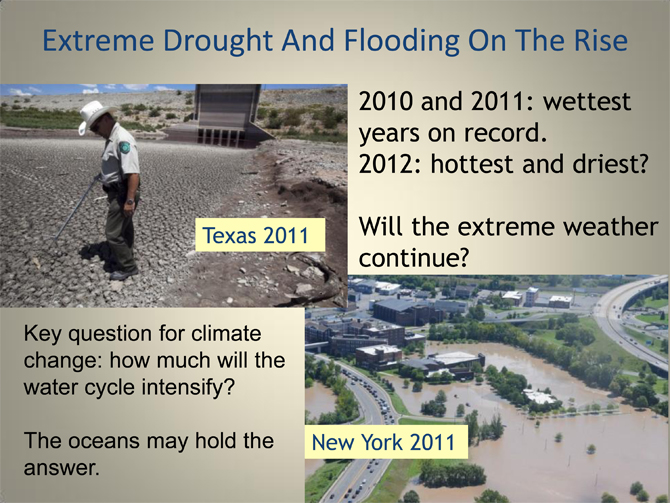 One of the most worrisome impacts of climate change is a possible acceleration of the global water cycle leading to more frequent droughts and floods. 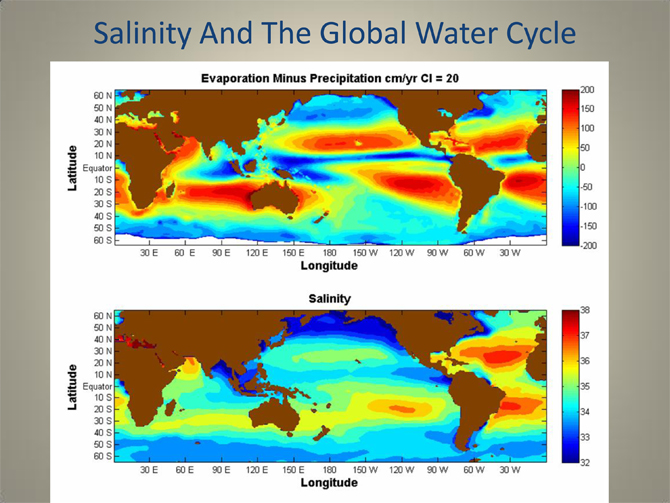 The ocean retains a better record of changes in precipitation than the land, and translates these changes into variations in the salt concentration of its surface waters. 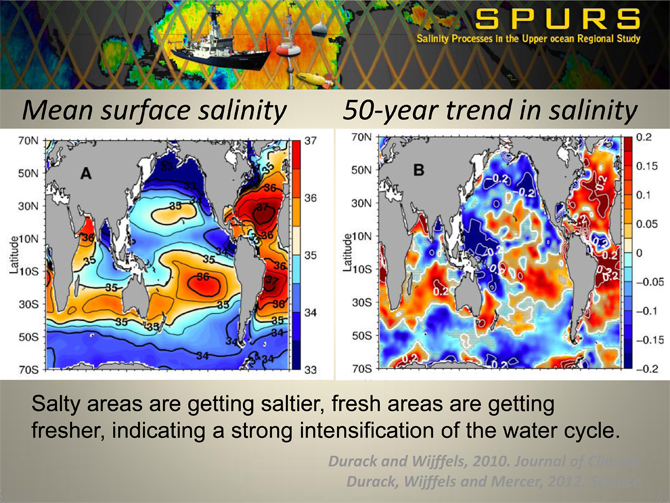 The salty areas of the ocean are getting saltier, while fresh areas are getting fresher. This indicates a strong intensification of the water cycle over the last decades. 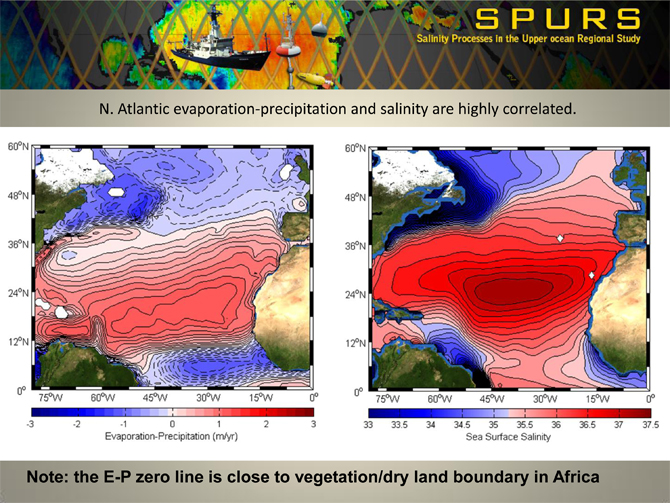 The changes in global ocean salinity are larger than what climate models can explain. SPURS is designed to investigate this discrepancy and examine the oceanic processes influencing surface salinity. 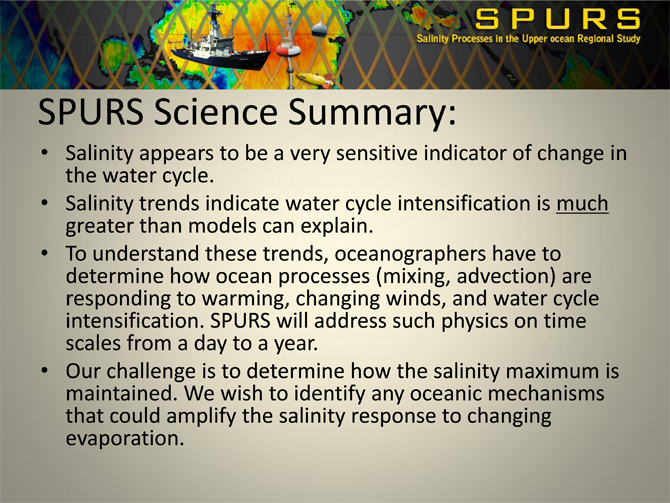 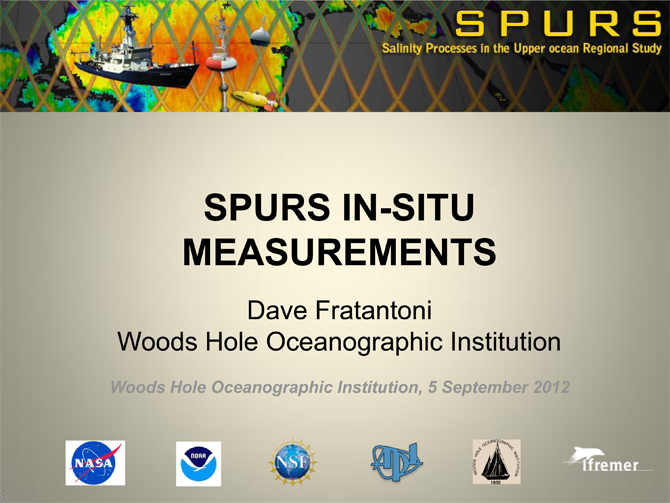 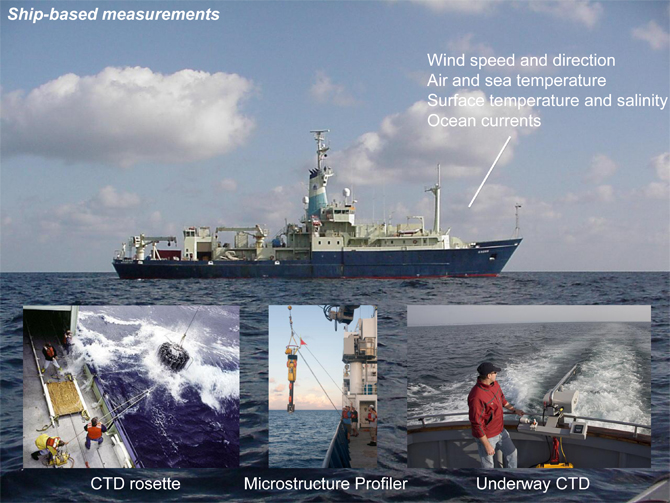 The Research Vessel Knorr will serve as a platform for temperature, salinity, and meteorological measurements in addition to transporting a large fleet of robotic vehicles to the SPURS site in the tropical Atlantic. 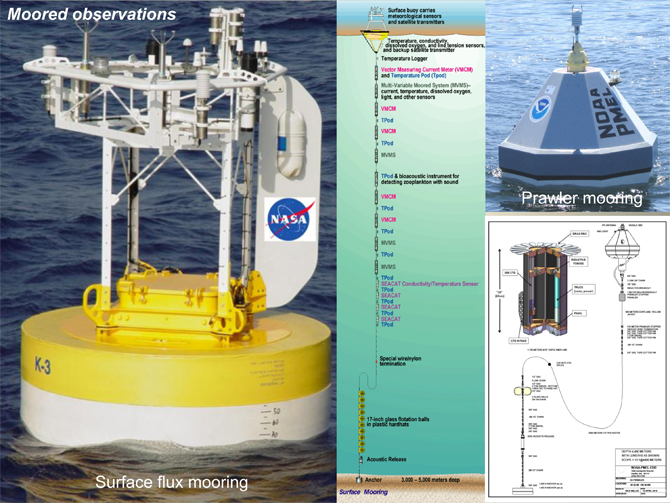 Researchers will deploy an array of three oceanographic moorings at the SPURS site for a year: the WHOI surface flux mooring will measure meteorological parameters and fluxes between the ocean and atmosphere, while two NOAA profiling crawler (“prawler”) moorings will obtain meteorological observations and serial profiles along the mooring wire. 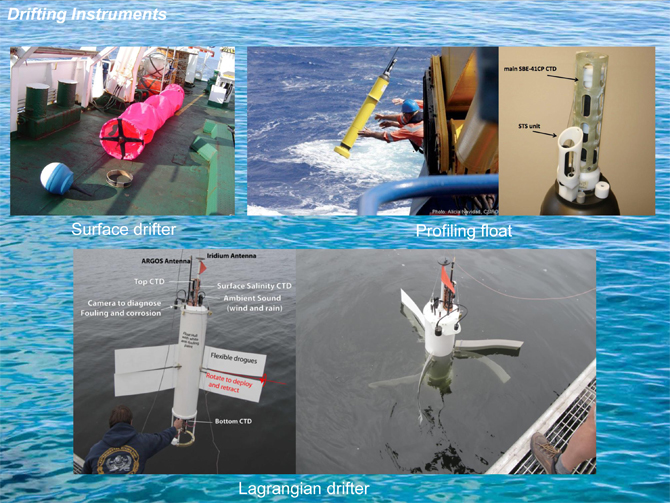 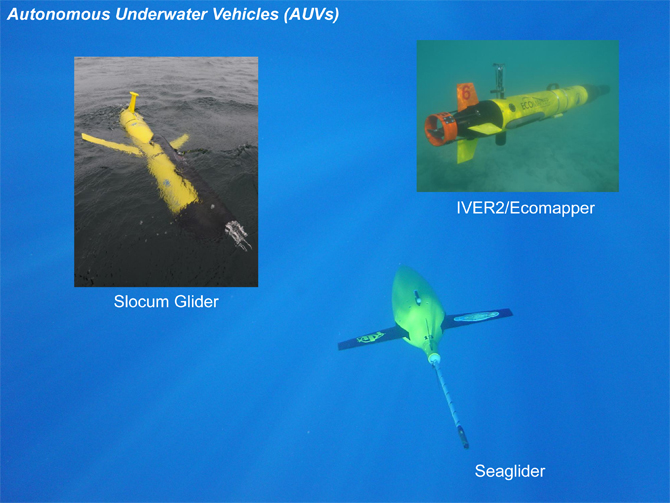 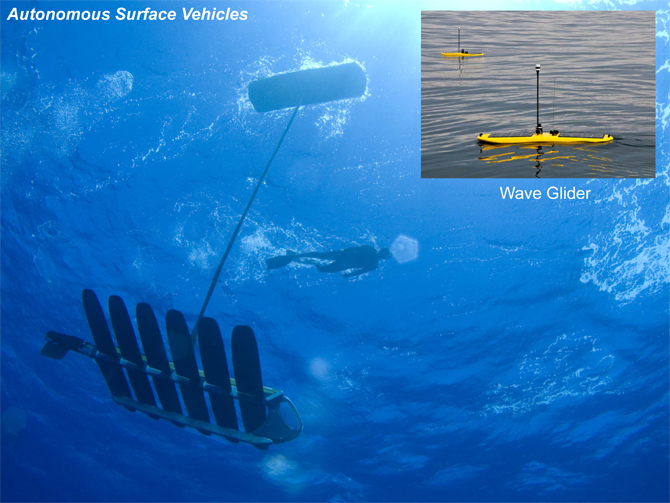 Three sun-powered wave gliders equipped to measure temperature, salinity, and meteorological conditions will occupy a 62-mi (100-km) region near the SPURS moored array for a year. 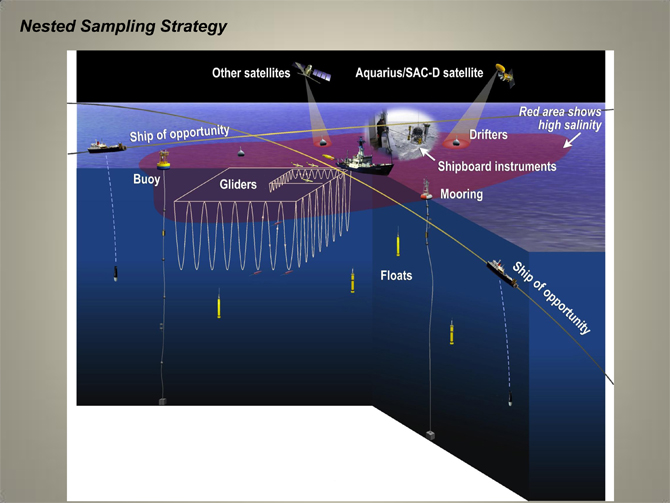 SPURS will use a nested observational strategy: expendable devices and ships-of-opportunity will collect temperature and salinity measurements over a wide geographic area in the central tropical Atlantic. Moorings and small fleets of robotic vehicles will provide a sustained year-long presence in a smaller observational area. During research cruises, ship-deployed platforms will make high-resolution measurements of even smaller oceanographic features. 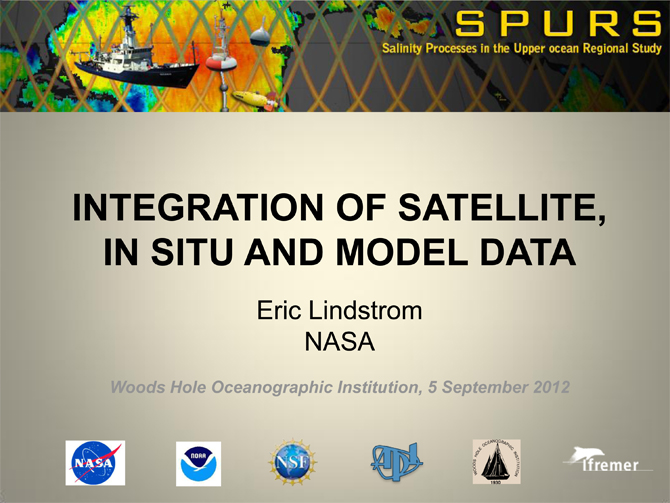 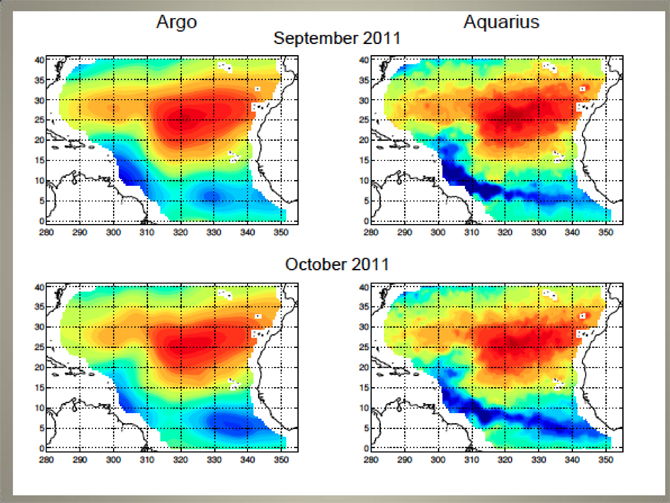 NASA's Aquarius instrument has been collecting ocean surface salinity measurements from space since August 2011 and using data from Argo, a global array of thousands of drifting profiling floats measuring the temperature and salinity of the upper layers of the ocean, for comparison and validation. 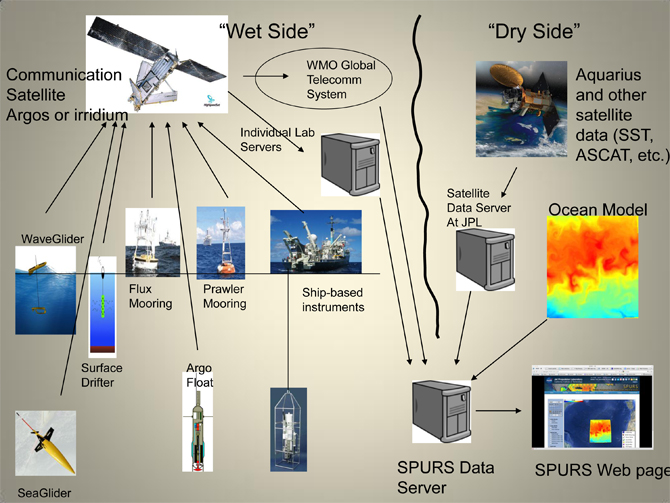 The data collected by the SPURS devices will be relayed via satellite to shore and integrated with numerical ocean models and satellite observations.