After nine years in a clean room, an instrument that studies the Earth's atmosphere and protective ozone layer has been returned to service. 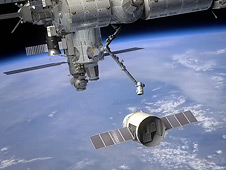 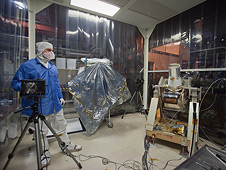 NASA Langley engineer Mark Thornblom helps calibrate SAGE III-ISS for its scan of the moon Feb. 17. The SAGE team arrived at midnight to continue testing the instrument, which will be attached to the space station to measure ozone, water vapor and aerosols in the Earth's atmosphere. Credit: NASA/Sean Smith 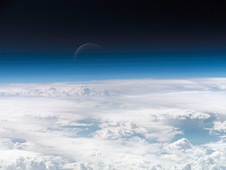 The fragility of the Earth's atmosphere is illustrated by the thin blue line in this image that fades into the darkness of space. An astronaut took the photo from the International Space Station. Credit: NASA

NASA's Stratospheric Aerosol and Gas Experiment III-ISS (SAGE III-ISS) will measure ozone, water vapor and aerosols in the atmosphere when it is attached to the International Space Station (ISS) three years from now.

The instrument is scheduled for launch in 2014 on a SpaceX rocket from NASA's Kennedy Space Center in Florida.

"It will ride in the unpressurized trunk of the rocket, and NASA will use robots to dock the instrument on the ISS - kind of like Transformers," said Michael Cisewski, SAGE III-ISS project manager at NASA Langley Research Center in Hampton, Va. "We're mounting to a piece of the ISS that is going up in the next shuttle launch."

The new instrument was built in anticipation of being attached to the space station in 2005. A change in ISS design, however, put those plans on hold.

The instrument was stored in a Class 100 clean room in a sealed shipping container under a continuous gaseous nitrogen purge. The purge kept clean dry "air" inside the instrument.

"Now, everything is falling into place," said Cisewski.

SAGE III-ISS underwent initial testing at Langley the week of February 14, 2011, in a clean room set up in a bay with an afternoon view of the sun.

The instrument was commanded to point to and lock onto the sun as if it were engaging a sunrise event over the horizon. Once locked on, the instrument's scan mirror scanned the full disk of the sun every two seconds. It also was tested at night using the moon as a radiant source.

"It's a matter of testing SAGE III in all its operational modes, solar and lunar, then making some minor modifications," said Patrick McCormick, SAGE principal investigator partnering with NASA through the Center for Atmospheric Sciences at Hampton University in Hampton, Va.

"The nice thing about SAGE III-ISS," McCormick said, "is that being a replica of a proven instrument, the risk for its refurbishment is exceedingly low. SAGE III is a solid, stable instrument."

Unique aspects of SAGE III-ISS include:
Previous SAGE instruments include SAGE, launched in 1979, followed by SAGE II in 1984. SAGE II gathered data for more than 20 years, and the information it collected was part of the effort that led to a global ban on chlorofluorocarbons in 1987.

Chlorofluorocarbons were used in air-conditioning units and aerosol spray propellants that contributed to the Earth's shrinking layer of protective ozone, which has begun to recover after the chlorofluorocarbon ban.

Ball Aerospace & Technologies Corp. built the SAGE III-ISS instrument in Boulder, Colo. The European Space Agency and Thales Alenia Space, headquartered in France, are providing a hexapod to keep the instrument pointing in the right direction as the ISS maneuvers in space.