During its October 1984 deployment from the Space Shuttle Challenger by astronaut Sally Ride, the Earth Radiation Budget Satellite Experiment (ERBS) solar panel stuck. Ride had to shake the satellite with the Shuttle's robotic arm for the panel to extend.

Is it meeting and surpassing the expectations of the proposed mission life?

The ERBS spacecraft and its payload were on a planned 24-month mission to study Earth's atmosphere and climate; it was operational for almost 21 years.

Is it a satellite instrument that transmits over two decades worth of data?

The Stratospheric Aerosol and Gas Experiment II (SAGE II) instrument on ERBS continued to give scientists a wealth of data on the chemistry and motions of the upper troposphere and stratosphere until September 2005.

Is it safe to say that NASA and the international science community got more than they expected?

"I would have to believe that SAGE II is a fairly big feather in NASA's cap," said Joe Zawodny, the former science mission manager for ERBS at NASA's Langley Research Center. "There are not very many instruments and data sets that have such a big and long lasting impact on the scientific community."

Managed by NASA Langley, SAGE II was part of NASA's Earth Radiation Budget Experiment (ERBE). The series of satellites were designed to investigate how energy from the Sun is absorbed and re-emitted by the Earth system, one of the main processes that drive weather patterns and in the long run, climate change. Observations from the ERBS satellite were also used to study the effects of human activities -- burning fossil fuels and the use of chemicals -- and natural occurrences such as volcanic eruptions on the Earth's radiation balance.

The instrument's ability to monitor atmospheric chemistry helped scientists understand the damage chlorofluorocarbons do to stratospheric ozone. The science findings led to the 1987 Montreal Protocol to drastically reduce the use of such substances.

Zawodny thinks the number one impact SAGE II data has had on the global scientific community is 20 years of high quality ozone measurements and the ability to monitor the ozone for trends and changes throughout the stratosphere. 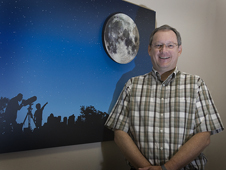 
SAGE II measured the decline in the amount of stratospheric ozone over the Antarctic since the ozone hole was first described in 1985.

A very close second would be the aerosol data record including polar stratospheric clouds or PSCs. The surface of PSCs converts chlorine gases in the upper atmosphere from a benign or passive state to an active state that contributes to ozone depletion. The PSC record was crucial to understanding the ozone hole process.

Twenty years of SAGE II high quality aerosol profiles have also been used to understand the impact of volcanic aerosols on climate. The eruption of Mount Pinatubo in 1991 and the recovery to pre-eruption conditions is considered by some scientists to have had the greatest impact on the stratosphere of any volcanic eruption of the last century. Pinatubo produced three times the 12 megatons of aerosol material produced by the Mexican volcano El Chichon that erupted in 1982.

For Zawodny, SAGE II was self admittedly the backbone of his entire NASA career.

"It's taken a very long time to fully understand the data and to build its stature within the international scientific community," he said. "We're still learning things about the instrument and the data. While SAGE II is probably not the household name that, say, a Hubble (space telescope) is, it's had an impact on the average person. The international ozone assessments have brought the international community to action in a rare and unified way. One result of this action is the virtual elimination of chlorofluorocarbons in favor of hydro chlorofluorocarbons and the subsequent adoption of the new technology in consumer devices: auto and home air conditioning, refrigeration, and industrial uses."

But from this highpoint came the inevitable for a machine enduring the harsh environment of space. The satellite mission that had a long, productive life and seemed to defy engineering odds and predicted ends was nearing the finish line in 2005. ERBS was over 21-years-old and had system failures consistent with its age.

Five years earlier, the satellite and SAGE II instrument were almost retired when a gimbal system -- the hardware that aimed or pointed the seven-channel Sun photometer – failed. The instrument collected its data by "watching" hundreds of sunrises and sunsets through the limb or edge of the Earth's atmosphere, a technique called solar occultation. Before each sunrise and sunset, the instrument rotated to a predicted position for the next appearance of the Sun. SAGE II used this solar occultation technique to measure solar radiation through the limb of the Earth's atmosphere at various wavelengths. From these wavelengths, spectral analysis revealed chemical, water vapor, aerosol and ozone changes caused by humans and nature.

Zawodny is credited with creating the computer fix for the gimbal system and adding five more years of data collection to the mission.

But there was one other big issue with the aging spacecraft -- it was not designed for a controlled re-entry into the Earth's atmosphere.

The plan was to place ERBS in a "safe" orbit and do nothing, the satellite would decay and re-enter in approximately 15 years. But if the spacecraft power systems shut down, NASA would have no way to maneuver ERBS to avoid collision with other spacecraft during its descent toward Earth.

In particular, the spacecraft had two batteries aboard -- each with 22 fuel cells. Batteries were essential for control of the spacecraft; one battery had completely failed; and the remaining battery had failed cells.

If the spacecraft lost power before NASA sent a command to disconnect the batteries from the spacecraft solar cells, there was a possibility of a battery explosion – an event that could produce space debris -- adding a new threat to other orbiters.

For safety's sake and an optimal, uncontrolled re-entry into the atmosphere, NASA made the decision to initiate actions for decommission of the spacecraft.

Team, having spent almost 24 hours trying to deplete the last of the remaining fuel, the ERBS End of Mission Team decided that the time had come to terminate the mission. The 'passivation' of the spacecraft began; ERBE and SAGE were powered on; all available power loads were enabled; the final tape recorder playback was performed. On board memory was scrubbed, and all command-able solar array circuits were taken off-line. On the final ERBS contact, the attitude and momentum control system was disabled and the power system was put in discharge. The final commands opened the thrusters to allow the remaining fuel to seep out, and the transponders were powered off for the last time at 23:00:00.

ERBS completed 114,941 orbits over 21 years of operations. Though time had taken its toll, the spacecraft refused to go quietly.

In a subsequent news release, Ball Aerospace & Technologies Corp., which built SAGE II and ERBS, the first satellite designed for launch by a space shuttle, announced its passing roughly 19 years later than scheduled.

And what a difference a year makes; a NASA news release from 2004 touted:

But a little over 12 months later, after 21 years and nine days, mission engineers officially retired the satellite on Oct. 14, 2005 – leaving it in silent orbit over the blue planet below.

Decommissioning of ERBS would not have too much of a negative effect on data collection. NASA successfully launched the SAGE III instrument aboard the Russian METEOR 3 spacecraft in 2001 while other active NASA spacecraft continue to monitor global ozone activity and collect atmospheric aerosol data.

So the footnote to the final analysis for what makes a successful Earth observing satellite mission may be a decade and a half away when time and gravity takes its toll on ERBS. Sometime around 2023, almost 40 years after its shaky start, the spacecraft will re-enter the Earth's atmosphere and disintegrate.

Perhaps a new generation, experiencing the benefits of global-scale policy decisions made as a result of ERBS' observations, will enjoy the sight of the smallish shooting star – marking the ultimate, unofficial end to the satellite whose acronym sounded like a cartoon character, the instrument named for wisdom through experience, and for a fairly big feather in NASA's cap.