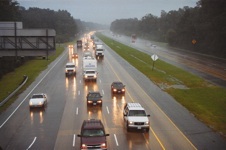 Motor vehicles give off only minimal amounts of sulfates and nitrates, both pollutants that cool climate, though they produce significant amounts of pollutants that warm climate such as carbon dioxide, black carbon, and ozone. Credit: NASA's Langley Research Center
› Larger image

The on-road transportation sector releases significant amounts of carbon dioxide, black carbon, and ozone—all substances that cause warming. In contrast, the industrial sector releases many of the same gases, but it also tends to emit sulfates and other aerosols that cause cooling by reflecting light and altering clouds. Credit: NASA GISS/Unger
› Larger image 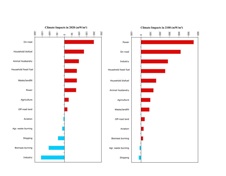 Unger's model finds that in 2020 (left), transportation, household biofuels and animal husbandry will have the greatest warming impact on the climate, while the shipping, biomass burning, and industrial sectors will have a cooling impact. By 2100 (right), the model finds that the power and industrial sector will become strongly warming as carbon dioxide accumulates. Credit: NASA GISS/Unger
› Larger image 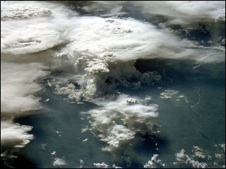 Unger's analysis is one of the first of its kind to incorporate the multiple effects that aerosol particles can have on clouds, which affect the climate indirectly. Credit: NASA's Johnson Space Center
› Larger image

For decades, climatologists have studied the gases and particles that have potential to alter Earth's climate. They have discovered and described certain airborne chemicals that can trap incoming sunlight and warm the climate, while others cool the planet by blocking the Sun's rays.

Each part of the economy, such as ground transportation or agriculture, emits a unique portfolio of gases and aerosols that affect the climate in different ways and on different timescales.

"We wanted to provide the information in a way that would be more helpful for policy makers," Unger said. "This approach will make it easier to identify sectors for which emission reductions will be most beneficial for climate and those which may produce unintended consequences."

In a paper published online on Feb. 3 by the Proceedings of the National Academy of Sciences, Unger and colleagues described how they used a climate model to estimate the impact of 13 sectors of the economy from 2000 to 2100. They based their calculations on real-world inventories of emissions collected by scientists around the world, and they assumed that those emissions would stay relatively constant in the future.

Snapshots of the Future

In their analysis, motor vehicles emerged as the greatest contributor to atmospheric warming now and in the near term. Cars, buses, and trucks release pollutants and greenhouse gases that promote warming, while emitting few aerosols that counteract it.

The researchers found that the burning of household biofuels -- primarily wood and animal dung for home heating and cooking -- contribute the second most warming. And raising livestock, particularly methane-producing cattle, contribute the third most.

On the other end of the spectrum, the industrial sector releases such a high proportion of sulfates and other cooling aerosols that it actually contributes a significant amount of cooling to the system. And biomass burning -- which occurs mainly as a result of tropical forest fires, deforestation, savannah and shrub fires -- emits large amounts of organic carbon particles that block solar radiation.

The new analysis offers policy makers and the public a far more detailed and comprehensive understanding of how to mitigate climate change most effectively, Unger and colleagues assert. "Targeting on-road transportation is a win-win-win," she said. "It's good for the climate in the short term and long term, and it's good for our health."

Due to the health problems caused by aerosols, many developed countries have been reducing aerosol emissions by industry. But such efforts are also eliminating some of the cooling effect of such pollution, eliminating a form of inadvertent geoengineering that has likely counteracted global warming in recent decades.

"Warming should accelerate as we continue to remove the aerosols," said Unger. "We have no choice but to remove the aerosol particulate pollution to protect human and ecosystem health. That means we'll need to work even harder to reduce greenhouse gases and warming pollutants."

By the year 2100, Unger's projections suggest that the impact of the various sectors will change significantly. By 2050, electric power generation overtakes road transportation as the biggest promoter of warming. The industrial sector likewise jumps from the smallest contribution in 2020 to the third largest by 2100.

"The differences are because the impacts of greenhouse gases accumulate and intensify over time, and because they persist in the atmosphere for such long periods," said Unger. "In contrast, aerosols rain out after a few days and can only have a short-term impact."

For each sector of the economy, Unger's team analyzed the effects of a wide range of chemical species, including carbon dioxide, nitrous oxide, methane, organic carbon, black carbon, nitrate, sulfate, and ozone.

The team also considered how emissions from each part of the economy can impact clouds, which have an indirect effect on climate, explained Surabi Menon, a coauthor of the paper and scientist at the Lawrence Berkeley National Laboratory in Berkeley, Calif.

Some aerosols, particularly sulfates and organic carbon, can make clouds brighter and cause them to last longer, producing a cooling effect. At the same time, one type of aerosol called black carbon, or soot, actually absorbs incoming solar radiation, heats the atmosphere, and drives the evaporation of low-level clouds. This process, called the semi-direct aerosol effect, has a warming impact.

The new analysis shows that emissions from the power, biomass burning, and industrial sectors of the economy promote aerosol-cloud interactions that exert a powerful cooling effect, while on-road transportation and household biofuels exacerbate cloud-related warming.

More research on the effects of aerosols is still needed, Unger cautions. "Although our estimates of the aerosol forcing are consistent with those listed by the International Panel on Climate Change, a significant amount of uncertainty remains."

Other Research by Nadine Unger
› http://pubs.giss.nasa.gov/authors/nunger.html