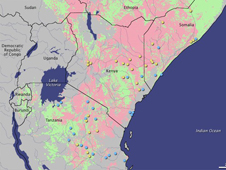 Rift Valley fever is unique in that its emergence is closely linked to interannual climate variability. Utilizing that link, researchers including Assaf Anyamba, a geographer and remote sensing scientist with the University of Maryland Baltimore County and NASA's Goddard Space Flight Center in Greenbelt, Md., used a blend of NASA and National Oceanic and Atmospheric Administration measurements of sea surface temperatures, precipitation, and vegetation cover to predict when and where an outbreak would occur.

The final product, a Rift Valley fever "risk map," gave public health officials in East Africa up to six weeks of warning for the 2006-2007 outbreak, enough time to lessen human impact. The researchers described their findings in the Proceedings of the National Academy of Sciences.

The first-of-its-kind prediction is the culmination of decades of research. During an intense El Niño event in 1997, the largest known outbreak of Rift Valley fever spread across the Horn of Africa. About 90,000 people were infected with the virus, which is carried by mosquitoes and transmitted to humans by mosquito bites or through contact with infected livestock.

The 1997 outbreak provoked the formation of a working group--funded by the U.S. Department of Defense Global Emerging Infections Surveillance and Response System--to see if predictions of an outbreak could be made operational. Such predictions would not only aid mitigation efforts in the endemic countries and protect the global public, but would help protect American civilian and military personnel located and traveling overseas, ensure the safety of imported goods and animals, and prevent infected humans or mosquitoes from entering the United States. 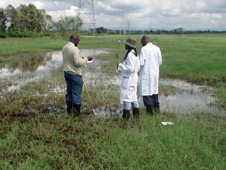 Scientists study a typical dambo habitat at Sukari Farm, a long-term Rift Valley Fever study site just outside Nairobi, Kenya. Dambos are natural breeding grounds for disease-carrying mosquitoes and can be observed from space with the aid of satellites. Credit: Assaf Anyamba
> Larger image "To do all that, we need to understand a disease in the endemic region," Anyamba said.

The link between the mosquito life cycle and vegetation growth was first described in a 1987 Science paper by co-authors Kenneth Linthicum of the U.S. Department of Agriculture and Compton Tucker of NASA Goddard. Then, a subsequent 1999 Science paper described link between the disease and the El Niño-Southern Oscillation (ENSO). ENSO is a cyclical, global phenomenon of sea surface temperature changes that can contribute to extreme climate events around the world.

For some areas, the warm phase of ENSO brings drought, while in some areas like the Horn of Africa, ENSO leads to above-normal rainfall. Excessive, sustained rainfall awakens the eggs of mosquitoes infected with Rift Valley fever that can remain dormant for up to 15 years in dried-out dambos—shallow wetlands common in the region.

Building on that research, Anyamba and colleagues set out to predict when conditions were ripe for excessive rainfall, and thus an outbreak. They started by examining satellite measurements of sea surface temperatures. One of the first indicators that ENSO will bring an abundance of rainfall is a rise in the surface temperature of the eastern equatorial Pacific Ocean and the western equatorial Indian Ocean.

But perhaps the most telling indicator of a potential outbreak is a measure of the mosquito habitat itself. The researchers used a satellite-derived vegetation data set--processed at NASA Goddard and called the Normalized Difference Vegetation Index—that measures the landscape's "greenness." Greener regions have more than the average amount of vegetation, which means more water and more potential habitat for infected mosquitoes.

"Greenness describes habitat and represents life," Anyamba said. "Without such systematic, continuous Earth system measurements from satellites, we would not be able to translate the information into outbreak predictions."

The final product is a risk map for Rift Valley fever, showing areas of anomalous rainfall and vegetation growth over a three-month period. The forecast is updated and issued monthly as a means to guide ground-based mosquito and virus surveillance. 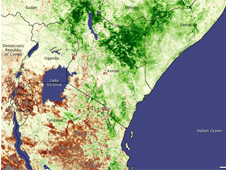 A satellite-derived vegetation map, known as a Normalized Difference Vegetation Index, shows the amount of plant growth above (green) and below (brown) the norm for East Africa. Credit: Assaf Anyamba and the NASA Earth Observatory
> Larger image As early as September 2006, the monthly advisory from Anyamba and colleagues indicated an elevated risk of Rift Valley fever activity in East Africa. By November, Kenya's government had begun collaborating with non-governmental organizations to implement disease mitigation measures—restricting animal movement, distributing mosquito bed nets, informing the public, and enacting programs to control mosquitoes and vaccinate animals.

"There is no human vaccine," Anyamba said, "so prevention is critical."

Between two and six weeks later—depending on the location—the disease was detected in humans.

"Satellite data is a valuable tool that allowed us to look remotely at large sections of land in Africa and understand what was happening on the ground," Linthicum said.

After the 2006-2007 outbreak, Anyamba and colleagues assessed the effectiveness of the warning maps. They compared locations that had been identified as "at risk" with the locations where Rift Valley fever was reported.

Of the 1,088 cases reported in Kenya, Somalia, and Tanzania, 64 percent fell within areas delineated on the risk map. The other 36 percent of cases did not occur within "at risk" areas, but none were more than 30 miles away, leading the researchers believe that they had identified most of the initial infection sites.

The potential for mapping the risk of disease outbreaks is not limited to Africa. Previous research has shown that risk maps are possible whenever the abundance of a virus can be linked to extremes in climate conditions. Chikungunya in east Africa and Hantavirus and West Nile virus in the United States, for example, have been linked to conditions of rainfall extremes.

"We are coming up on almost 30 years of vegetation data from satellites, which provides us with a good basis for predicting," Linthicum said upon returning from a Rift Valley fever workshop in Cairo, Egypt in January. "At this meeting, it was clear that using this tool as a basis for predictions has become accepted as the norm."