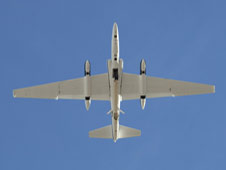 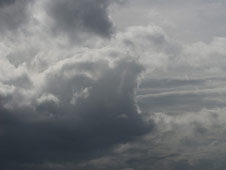 › View larger image
The MC3E field campaign will be observing cloud systems, such as this one that formed over Costa Rica, to observe cloud systems that produce copious amounts of rain. Photo Credit: Eric James/NASA Ames. 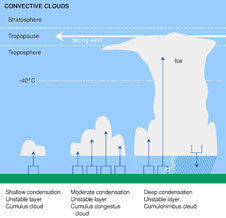 › View larger image
Convective clouds - a vertically developed family of clouds are cumulus and cumulonimbus. The height of their bases range from as low as 1,000 feet to a bit more than 10,000 feet. Clouds with extensive vertical development are positive indications of unstable air. Strong upward currents in vertically developed clouds can carry high concentrations of supercooled water to high levels where temperatures are quite cold. Upper portions of these clouds may be composed of water and ice. Credit: NASA Langley Scientists from NASA and other organizations are on a mission to unlock the mysteries of why certain clouds produce copious amounts of rain. In a field mission that is now under way, aircraft are carrying instruments above and into rain clouds. Meanwhile scientists are also getting rainfall measurements on the ground.

This field campaign provides the most comprehensive observations of rainfall in the U.S. through the use of aircraft, spacecraft, remote sensing and ground sensors.

On April 22, scientists from NASA and the U.S. Department of Energy (DOE) launched a weeks-long field campaign to learn more about the inner workings of cloud systems that generate significant amounts of rainfall. The field campaign, called the Mid-latitude Continental Convective Clouds Experiment (MC3E), will run until June 6 from the DOE's Southern Great Plains site near Ponca City in central Oklahoma. Because April through June is severe weather season in Oklahoma, there will be plenty of convective clouds to study.

"Because precipitation is so critical to our daily existence, we naturally would like to know how much rain falls at any given place and time," said Walt Petersen, a scientist at the NASA Marshall Space Flight Center in Huntsville, Ala., who is leading NASA's component of the campaign. "Our goal is to observe and measure the entire precipitation process, from the ice that forms near the tops of clouds to the rainfall that ends up on the ground."

Campaign scientists say the effort is unprecedented in scope. It combines data gathered by instruments on the ground as well as those installed on aircraft flying at varying altitudes. This way, researchers can simultaneously observe clouds from high altitudes using instruments installed on NASA’s ER-2 aircraft, while sampling the sizes, types, and shapes of precipitation from aircraft flying at lower altitudes within the cloud. Meanwhile, ground-based radars and imaging networks are analyzing the precipitation that actually falls to the ground.

The goal of MC3E is to intensively sample the entire column of the atmosphere underneath the satellite simulator (the ER-2) and verify that all aircraft and ground-based measurements paint a consistent picture of precipitation physics, Petersen said.

Convective clouds are most common in the tropics. Convective cloud systems are also common at higher latitudes, including Oklahoma, and appear as puffs, mounds, or towering clouds that can range from as low as 1,000 feet to more than 50,000 feet. In these clouds, large amounts of water vapor are cooled and condensed into water droplets and eventually falls as precipitation.

"Convective cloud processes play a critical role in our daily lives," added Michael Jensen, the meteorologist leading the DOE element of the MC3E campaign. "To represent these cloud systems in computer models of the atmosphere, we need to understand the details of why these clouds form, where they form, how they grow and shrink, and what factors control the amount of rain that falls from them. MC3E will provide insights into all of these questions."

Scientists will use this data to advance techniques for deriving more accurate rainfall information from a network of satellites as part of the Global Precipitation Measurement (GPM) mission satellite to be launched in 2013. GPM, an international partnership lead by NASA and the Japanese Aerospace Exploration Agency (JAXA) in coordination with space agencies of many nations, will measure rain and snow over the entire globe using more sophisticated instruments. It builds on the success of the NASA-JAXA TRMM satellite, which provides scientists with daily worldwide rain intensities in the tropics.

"Our ability to relate satellite observations to rain that hits the ground requires detailed knowledge of the atmospheric column above it," says Arthur Hou, the GPM project scientist at the NASA Goddard Space Flight Center in Greenbelt, Md. "That is why data collected in field campaigns like MC3E are vital for refining satellite algorithms during the pre-launch phase."

"The end goal of this campaign is to collect a dataset that enables us to build the best set of methods to estimate the amount of precipitation over a point on the earth's surface from an orbiting GPM satellite," Petersen explained. This will improve the accuracy of future satellite instruments, including those flying on GPM.