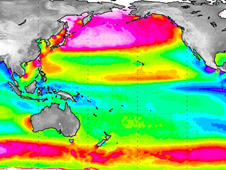 The new maps have many potential uses including planning the location of offshore wind farms to convert wind energy into electric energy. The research, published this week in Geophysical Research Letters, was funded by NASA's Earth Science Division, which works to advance the frontiers of scientific discovery about Earth, its climate and its future.

QuikSCAT, launched in 1999, tracks the speed, direction and power of winds near the ocean surface. Data from QuikSCAT, collected continuously by a specialized microwave radar instrument named SeaWinds, also are used to predict storms and enhance the accuracy of weather forecasts.

Wind energy has the potential to provide 10 to 15 percent of future world energy requirements, according to Paul Dimotakis, chief technologist at JPL. If ocean areas with high winds were tapped for wind energy, they could potentially harvest up to 500 to 800 watts of wind power per square meter, according to Liu's research. Dimotakis notes that while this is less than peak solar power, which is about 1000 watts per square meter on Earth's surface when the sky is clear and the sun is overhead at equatorial locations, the average solar power at Earth's mid-latitudes under clear-sky conditions is less than a third of that. Wind power can be converted to electricity more efficiently than solar power and at a lower cost per watt of electricity produced.

According to Liu, new technology has made floating wind farms in the open ocean possible. A number of wind farms are already in operation worldwide. Ocean wind farms have less environmental impact than onshore wind farms, whose noise tends to disturb sensitive wildlife in their immediate area. Also, winds are generally stronger over the ocean than on land because there is less friction over water to slow the winds down -- there are no hills or mountains to block the wind's path.

Ideally, offshore wind farms should be located in areas where winds blow continuously at high speeds. The new research identifies such areas and offers explanations for the physical mechanisms that produce the high winds.

An example of one such high-wind mechanism is located off the coast of Northern California near Cape Mendocino. The protruding land mass of the cape deflects northerly winds along the California coast, creating a local wind jet that blows year-round. Similar jets are formed from westerly winds blowing around Tasmania, New Zealand and Tierra del Fuego in South America, among other locations. Areas with large-scale, high wind power potential also can be found in regions of the mid-latitudes of the Atlantic and Pacific oceans, where winter storms normally track.

The new QuikSCAT maps, which add to previous generations of QuikSCAT wind atlases, also will be beneficial to the shipping industry by highlighting areas of the ocean where high winds could be hazardous to ships, allowing them to steer clear of these areas.

Scientists use the QuikSCAT data to examine how ocean winds affect weather and climate, by driving ocean currents, mixing ocean waters and affecting the carbon, heat and water interaction between the ocean and the atmosphere. JPL manages QuikSCAT for NASA. For more information about QuikSCAT, visit: http://winds.jpl.nasa.gov .