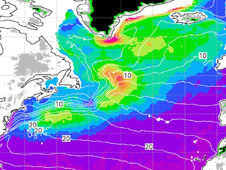 Winds data from NASA's QuikScat satellite were used to create this map of how frequently high winds blow in the Gulf Stream region off the Canadian coast during wintertime. Lower wind speeds are depicted in purple, higher wind speeds in red. The contour lines show sea surface temperatures in degrees Celsius. Winds increase sharply over the Gulf Stream and along the high glaciers of Greenland's southern tip. Image credit: NASA/JPL/University of Hawaii at Manoa
›  Larger view
Several new atlases of ocean wind patterns around the globe, based on data from NASA's QuikScat satellite, are benefiting a wide range of users, from those who sail the seas to those responsible for managing their precious resources.

Researchers compiled seven years of QuikScat data to create a never-before-available monthly atlas of how frequently high winds blow over the open ocean all over the world. The maps, which show where gales (winds greater than 39 knots or 45 miles per hour) are common, are available at http://iprc.soest.hawaii.edu/~takeaki/highwind/ . A paper on the findings was published recently in the Bulletin of the American Meteorological Society by researchers Takeaki Sampe and Shang-Ping Xie of the International Pacific Research Center at the University of Hawaii at Manoa.

The data also provide insights into many ocean wind phenomena. High winds play an important role in Earth's climate. They remove heat from the ocean, leading to the formation of "deep water" -- cold, salty, dense water that helps drive global ocean circulation patterns. They also help exchange gases, such as carbon dioxide, between the oceans and the atmosphere, mix different types of ocean water, and pump nutrients up from the deep sea for plankton to feed on.

Among the researchers' findings: 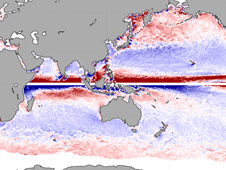 A global map for the month of January showing where cold "deep water (shown in red) is brought to the surface by ocean winds and where surface waters (shown in blue) are driven down by ocean winds into the interior ocean. Land boundaries, mid-ocean islands and ocean currents like the Atlantic Gulf Stream affect this phenomenon. Image credit: NASA/JPL/College of Oceanic and Atmospheric Sciences
›  Larger view

- Earth's windiest ocean location is Cape Farewell, Greenland, where gale winds blow 16 percent of the time.
- Half of the top 10 windiest spots occur where tall coastlines or high mountains meet the sea.
- Strong winds are much more frequent on the warm side of cold-warm fronts formed where the Atlantic's warm Gulf Stream flows northward into cold ocean regions. This gives climate scientists important clues about how sharp differences in ocean surface temperatures affect the atmosphere, with warm ocean temperatures creating an unstable atmosphere that sucks strong winds down from aloft.
- Typhoons and hurricanes have little impact on the frequency of overall high winds, since they are less frequent than other types of storms in Earth's mid-latitudes.

"People know high winds are found in big storms," said Xie. "What is most surprising from our research is that narrow ocean currents have such a large effect on the occurrence of high winds. For example, in cold meanders (bends) of the Atlantic's Gulf Stream, the frequency of high winds drops by an order of magnitude. This knowledge can provide navigators with a 'safe harbor' for ships."

Another NASA-funded wind atlas based on QuikScat data was published in late 2006 by researchers Craig Risien and Dudley Chelton of the College of Oceanic and Atmospheric Sciences, Corvallis, Ore., in the journal Remote Sensing of Environment. The first high-resolution, observationally-based, online interactive atlas of global ocean winds, it provides highly accurate, global information on wind statistics throughout Earth's oceans. These data are especially important in regions of the world where there are few ships and buoys to gather data. The resolution of the data is equivalent to having data from about 150,000 ocean buoys distributed uniformly across the global oceans. It is available online at http://cioss.coas.oregonstate.edu/cogow .

Risien and Chelton are also authors of another QuikScat winds atlas currently in press for the Journal of Physical Oceanography. It documents the seasonal cycles of numerous wind variables, and is available for download at http://cioss.coas.oregonstate.edu/scow . This new database is specifically designed for ocean modelers to use in climate studies.

QuikScat, managed by NASA's Jet Propulsion Laboratory, Pasadena, Calif., measures ocean surface winds by transmitting high-frequency microwave pulses to Earth's ocean surface and measuring the strength of the radar pulses that bounce back to the instrument. These ocean surface winds drive Earth's oceans and control the exchange of heat, moisture and gases between the atmosphere and the sea. For more information on QuikScat, see: http://winds.jpl.nasa.gov/index.cfm .