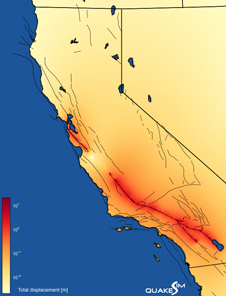 PASADENA, Calif. - NASA software that models the behavior of earthquake faults to improve earthquake forecasting and our understanding of earthquake processes, and NASA's first mobile application are co-winners of NASA's 2012 Software of the Year Award. The award recognizes innovative software technologies that significantly improve the agency's exploration of space and maximize scientific discovery on Earth.

QuakeSim, developed at NASA's Jet Propulsion Laboratory in Pasadena, Calif., is a comprehensive, state-of-the-art software tool for simulating and understanding earthquake fault processes and improving earthquake forecasting. Initiated in 2002, QuakeSim uses NASA remote sensing and other earthquake-related data to simulate and model the behavior of faults in 3-D both individually and as part of complex, interacting systems. This provides long-term histories of fault behavior that can be used for statistical evaluation. QuakeSim also is used to identify regions of increased earthquake probabilities called hotspots.

Studies have shown QuakeSim to be the most accurate tool of its kind for intermediate earthquake forecasting and detecting the subtle, transient deformation in Earth's crust that precedes and follows earthquakes. Its varied applications include scientific studies, developing earthquake hazard maps that can be used for targeted retrofitting of earthquake-vulnerable structures, providing input for damage and loss estimates after earthquakes, guiding disaster response efforts, and studying fluid changes in reservoirs, among others.

QuakeSim provides model and analysis tools, computational infrastructure, access to data and an interface for understanding the complete cycle of earthquakes. The software assimilates data of crustal deformation that leads to and follows earthquakes, together with seismicity data of earthquakes and geologic data. QuakeSim's integrated, map-based interfaces and applications make an unprecedented amount of complex geophysical data from the ground, air and space available and accessible to a broad range of scientists and end users, including emergency responders, commercial disaster companies, the insurance industry and civil engineers. The software allows them to explore and analyze observations, model earthquake processes and analyze patterns to focus attention and identify significant and/or subtle features in the data.

QuakeSim has had a number of notable accomplishments to date. It produced the first readily accessible set of digital fault models of California. It was used to identify regions in extreme southern California at risk for earthquakes, guiding the collection of data by NASA's Uninhabited Aerial Vehicle Synthetic Aperture Radar (UAVSAR) prior to a magnitude 7.2 earthquake in Baja, Mexico in 2010, which led to the first-ever airborne radar images of deformation in Earth's surface caused by a major earthquake. It helped define NASA's planned synthetic aperture radar satellite mission. It was used to rule out tectonic deformation of Earth's surface as a factor when a spate of water pipe breaks afflicted Los Angeles in 2009. The software also was used in several recent government earthquake response exercises, including the 2008 California ShakeOut, 2011 National Level Exercise and the 2012 Golden Guardian Exercise. QuakeSim approaches are being adopted by numerous organizations, including the Southern California Earthquake Center, United States Geological Survey and the California Geological Survey.

Software engineers at NASA's Ames Research Center in Moffett Field, Calif., developed the NASA App for mobile platforms including the iPhone, iPod touch, iPad and Android phones and tablets. The NASA App currently has more than 9.6 million user installations and receives more than three million hits per day on average.

A NASA software advisory panel reviews Software of the Year entries and recommends winners to NASA's Inventions and Contributions Board for confirmation. Both Ames and JPL have won individually or shared the award several times since it was initiated in 1994.