Pyrocumulonimbus is the fire-breathing dragon of clouds. 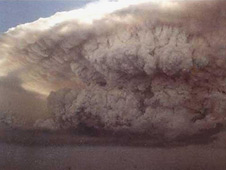 A pyrocumulonimbus storm combines smoke and fire with the features of a violent thunderstorm. Pollutants from these storms are funneled into the stratosphere. Credit: Naval Research Lab/Mike Fromm

Add smoke and fire to the mix and you have pyrocumulonimbus, an explosive storm cloud actually created by the smoke and heat from fire, and which can ravage tens of thousands of acres. And in the process, "pyroCb" storms funnel their smoke like a chimney into Earth's stratosphere, with lingering ill effects.

Researchers believe these intense storms may be the source of what previously was believed to have been volcanic particles in the stratosphere. They also suggest pyroCbs happen more often than thought, and say they're responsible for a huge volume of pollutants trapped in the upper atmosphere.

"An individual pyroCb can inject particles into the lower stratosphere as high as 10 miles," says Dr. Glenn K. Yue, an atmospheric scientist at NASA Langley Research Center in Hampton, Va.

Yue is one of eight authors of a paper on pyrocumulonimbus in the September 2010 Bulletin of the American Meteorological Society (BAMS) titled "The Untold Story of Pyrocumulonimbus." 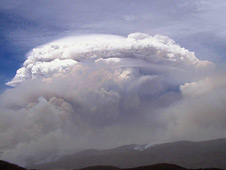 The paper reevaluates previous data to conclude that many stratospheric pollution events erroneously have been attributed to particles from volcanic eruptions.

Three "mystery cloud phenomena" were cited as examples that were actually the result of pyrocumulonimbus storms, including one initially attributed to the 1991 eruption of Mount Pinatubo in the Philippines. The plume thought to have been from Pinatubo was, it turns out, from a pyrocumulonimbus storm in Canada.

One reason for the misinterpretation, Yue said, is that scientists believed nothing less energetic than a volcanic eruption could penetrate Earth's "tropopause" in so short a period of time. The tropopause is the barrier between the lower atmosphere and stratosphere.

"At the time, the thinking was that it was unlikely," said Yue.

Humans have been responsible for many pyrocumulonimbus storms, says Mike Fromm, lead author on the BAMS paper.

The worst fire in Colorado history was set by a forestry officer "and within 24 hours there was a pyrocumulonimbus storm," says Fromm, a meteorologist at the Naval Research Laboratory in Washington, D.C. Whipped by the storm it had sparked, the 2002 fire swept across 138,000 acres (558.5 sq km) in four counties, drove more than 5,000 from their homes and killed six people.

Whether human actions influence pyrocumulonimbus activity enough to significantly impact the global climate is an open question. Human activity is believed to cause climate warming that leads to more wildfires.

"It's a compelling story line. We don't know enough now to say if there's enough supporting evidence of that," says Fromm.

"There's lots of fairly convincing evidence that under a warming climate, there are forest areas of Siberia and Canada that will be under more heat stress than before. And it's reasonable to think that there will be more fires."