In a new NASA study, researchers taking advantage of improvements in satellite sensor capabilities offer the first measurement-based estimate of the amount of pollution from East Asian forest fires, urban exhaust, and industrial production that makes its way to western North America.

China, the world’s most populated country, has experienced rapid industrial growth, massive human migrations to urban areas, and considerable expansion in automobile use over the last two decades. As a result, the country has doubled its emissions of man-made pollutants to become the world’s largest emitter of tiny particles called pollution aerosols that are transported across the Pacific Ocean by rapid airstreams emanating from East Asia.

Hongbin Yu, an associate research scientist of the University of Maryland Baltimore County working at NASA’s Goddard Space Flight Center in Greenbelt, Md., grew up in China and taught there as a university professor, where he witnessed first-hand and studied how pollution from nearby power plants in China affected the local environment. Early this decade, scientists began using emerging high-accuracy satellite data to answer key questions about the role tiny particles play in the atmosphere, and eventually expanded their research to include continent-to-continent pollution transport. So Yu teamed with other researchers to take advantage of the innovations in satellite technology and has now made the first-ever satellite-based estimate of pollution aerosols transported from East Asia to North America.

The new measurements from the Moderate Resolution Imaging Spectroradiometer (MODIS) instrument on NASA’s Terra satellite substantiate the results of previous model-based studies, and are the most extensive to date. The new study will be published this spring in the American Geophysical Union’s Journal of Geophysical Research-Atmospheres.

“We used the latest satellite capabilities to distinguish industrial pollution and smoke from dust transported to the western regions of North America from East Asia. Looking at four years of data from 2002 to 2005 we estimated the amount of pollution arriving in North America to be equivalent to about 15 percent of local emissions of the U.S. and Canada,” Yu said. “This is a significant percentage at a time when the U.S. is trying to decrease pollution emissions to boost overall air quality. This means that any reduction in our emissions may be offset by the pollution aerosols coming from East Asia and other regions.”

Yu points out, however, that the matter of pollution transport is a global one. “Our study focused on East Asian pollution transport, but pollution also flows from Europe, North America, the broader Asian region and elsewhere, across bodies of water and land, to neighboring areas and beyond,” he said. “So we should not simply blame East Asia for this amount of pollution flowing into North America.” In fact, in a model study published last November in the Journal of Atmospheric Chemistry and Physics, Mian Chin, also a co-author of this study and an atmospheric scientist at NASA Goddard, suggests that European pollution also makes a significant contribution to the pollution inflow to North America.

“Satellite instruments give us the ability to capture more accurate measurements, on a nearly daily basis across a broader geographic region and across a longer time frame so that the overall result is a better estimate than any other measurement method we’ve had in the past,” said study co-author Lorraine Remer, a physical scientist and member of the MODIS science team at NASA Goddard. The MODIS instrument can distinguish between broad categories of particles in the air, and observes Earth’s entire surface every one to two days, enabling it to monitor movement of the East Asian pollution aerosols as they rise into the lower troposphere, the area of the atmosphere where we live and breathe, and make their way across the Pacific and up into the middle and upper regions of the troposphere.

Remer added that the research team also found that pollution movements fluctuate during the year, with the East Asian airstream carrying its largest “load” in spring and smallest in summer. The most extensive East Asian export of pollution across the Pacific took place in 2003, triggered by record-breaking wildfires across vast forests of East Asia and Russia. Notably, the pollution aerosols also travel quickly. They cross the ocean and journey into the atmosphere above North American in as little as one week.

“Using this imaging instrument, we cannot determine at what level of elevation in the atmosphere pollution travels. So, we do not have a way in this study to assess the degree of impact the pollution aerosols from China have on air quality here once they cross over to North America. We need improved technology to make that determination,” said Remer. “Nevertheless, we realize there is indeed impact. For example, particles like these have been linked to regional weather and climate effects through interactions between pollution aerosols and the Sun's heat energy. Since pollution transport is such a broad global issue, it is important moving forward to extend this kind of study to other regions, to see how much pollution is migrating from its source regions to others, when, and how fast,” said Remer. 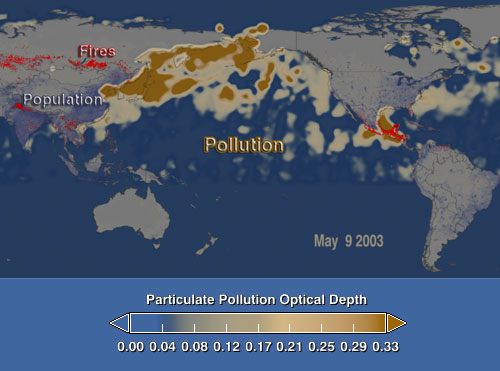 According to measurements taken with a satellite instrument, vast quantities of industrial aerosols and smoke from biomass burning in East Asia and Russia are traveling from one side of the globe to another. Explosive economic growth in Asia has profound implications for the atmosphere worldwide. Data collected by a NASA satellite shows a dense blanket of polluted air over the Northwestern Pacific. This brown cloud is a toxic mix of ash, acids, and airborne particles from car and factory emissions, as well as from low-tech polluters like coal-burning stoves and from forest fires. This image generated by data from NASA’s instrument called MODIS (Moderate Resolution Imaging Spectroradiometer) onboard the Terra satellite demonstrates how large and pervasive this transport phenomenon is across vast areas.

In this picture, heavy aerosol concentrations appear in shades of brown, with darker shades representing greater concentrations. Areas limned in black on the land surface represent human population. Notice how heavy aerosol production and dense population areas correspond. Also notice how there are dense patches of red points in East Asia. These correspond with intense forest fires, sending vast quantities of aerosols into the atmosphere. Although this image gives the impression that the fires and plumes of aerosols may not be connected, in fact they are. There’s a direct relationship between those fire point and the brown patches appearing to the East. 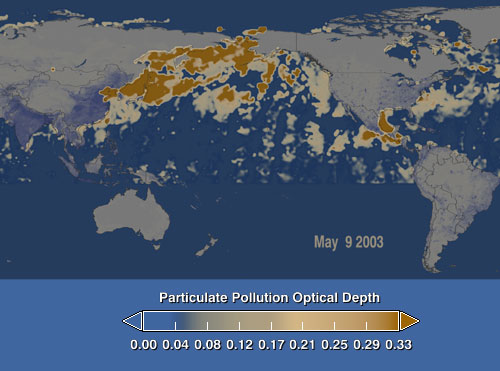 China’s exports fill shelves around the world, but according to a new NASA research paper, China also heavily exports pollution. This week, space agency scientists reveal how Chinese industrialization and Russian forest fires in combination with pollution transported eastward from Europe send roughly 18 teragrams — almost 40 billion pounds—of pollution aerosols into the atmosphere over the Northwestern Pacific every year. The MODIS instrument on NASA’s Terra satellite has been tracking the particulate pollution for more than seven years, gathering data as most of it drifted east across the Pacific Ocean. About 4.5 teragrams of particulate pollution each year could reach the western boundary of North America, which is about 15% of local emissions of particulate pollutants from the U.S. and Canada.

In the last two decades, China has more than doubled its pollution production. This boom may be contributing to substantial changes in climate and weather in places far from the origin of the particulates. Never in human history—anywhere—has there been industrial growth like that in modern China. But with fast growth comes unintended consequences, and from space evidence of those consequences is starting to emerge.

The research relies on measurements of something called “aerosol optical thickness”. It’s a quantitative measurement about how well a slice of atmosphere transmits light. The greater the value of optical thickness for a given location, the less light of a particular wavelength can pass through it. Measurements of aerosol optical thickness describe quantities of tiny particles in a given volume. By measuring how much light can penetrate a region of atmosphere across a variety of wavelengths, scientists can make certain inferences about the quantity and type of particles blocking that light.

This visualization shows the seasonal variations of transport of pollution aerosols across the North Pacific. The East Asian airstream carries its largest pollution loading in spring and smallest in summer and fall. With heavy concentrations of aerosols represented by shades of brown, scientists can track the origins and distribution of the particles as they travel in the atmosphere. The sequence also shows a trail of substantial aerosol concentrations from a variety of sources. These sources include heavy industrial activity in East Asia associated with high population density represented in this sequence by gradations of black covering the land surface, and intense Russian forest fires in high latitudes.