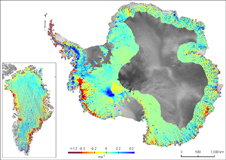 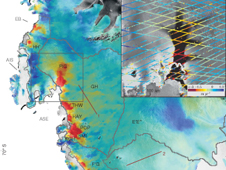 The new elevation maps show that all latitudes of the Greenland ice sheet are affected by dynamic thinning -- the loss of ice due to accelerated ice flow to the ocean. The maps also show surprising, extensive thinning in Antarctica, affecting the ice sheet far inland. The study, led by Hamish Pritchard of the British Antarctic Survey in Cambridge, England, was published September 24 in Nature.

ICESat’s precise laser altimetry instrument, launched in 2003, has provided a high-density web of elevation measurements repeated year after year across the Greenland and Antarctic ice sheets. With the dense coverage, the research team could distinguish which changes were caused by fast-flowing ice and which had other causes, such as melt.

The maps confirm that the profound ice sheet thinning of recent years stems from fast-flowing glaciers that empty into the sea. This was particularly the case in West Antarctica, where the Pine Island Glacier was found to be thinning between 2003 and 2007 by as much as 6 meters per year. In Greenland, fast-flowing glaciers were shown to thin by an average of nearly 0.9 meters per year.