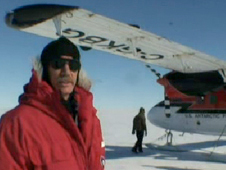 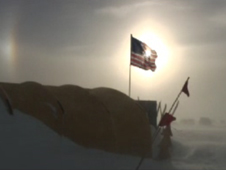 Dr. Bindschadler gives an update on the wait to get "boots on the ground" on the remote Pine Island Glacier in Antarctica. NASA scientists are anxious to begin deploying high tech drills and sensors on the quickly-moving glacier in an effort to better understand how global warming is affecting the continent. Credit: NASA's Goddard Space Flight Center
> Watch video 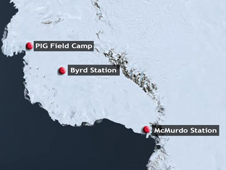 Researchers plan to establish a field camp on the ice shelf off the Pine Island Glacier (PIG) and begin drilling through the ice during the 2011-2012 field season. Meanwhile, scientists this year will practice drilling though ice at McMurdo Station, and plan for staging PIG field camp materials at Byrd Station. Credit: NASA
> Larger image
> Larger image (unlabeled) In January 2008, a small Twin Otter airplane outfitted with skis touched down on the icy edge of Antarctica's Pine Island Glacier, carrying NASA glaciologist Robert Bindschadler and a crew of scientists and technicians. It was the first time anyone had landed a plane on this ice shelf floating on the edge of the West Antarctic ice sheet. It will also probably be the last.

Bindschadler and colleagues set out to take the first-ever look beneath the ice shelf, which polar scientists believe to be thinning because of warm ocean waters below. But shortly after setting down on the ice, the team discovered the landscape was too rough and the possible runways too short for the multiple takeoffs and landings needed to transport their equipment to the field site. The team constructed a weather station and deployed global positioning system (GPS) units as close to the ice shelf as possible, and headed home.

"This expedition is like landing on a different planet," said Bindschadler, a scientist at NASA's Goddard Space Flight Center in Greenbelt, Md. Like astronauts exploring Mars, the researchers have to anticipate and carry everything they need to survive. Satellites, such as the Ice, Cloud and Land Elevation Satellite (ICESat), Terra and Landsat, provide a broad look at Antarctica, but scientists don’t know exactly what the remote environment will look like until they get there. But now they know. And they are going back.

In a project that started under the auspices of the International Polar Year (IPY), Bindschadler and crew are now planning the next steps for research on Pine Island Glacier. They will go back to Antarctica for the 2009-2010 field season to work out the "choreography" required of drilling a 13-centimeter (5-inch) diameter hole though 550 meters (1,800 feet) of ice. The goal is to deploy water-profiling instruments and cameras in the sea below the ice shelf in 2011-2012.

It will take two years to turn a section of the remote ice sheet into a "village" for research because transportation and setup of field camps can happen only during the short Antarctic summer (late October though late January). They will need a place to eat, sleep, work, and bathe; a generator for electrical power; a safe location for helicopter landings; and lots of food and fuel. That’s tens of thousands of pounds of equipment.

NASA and the National Science Foundation, which is co-funding the expedition, are now planning to fly the equipment about 1,600 kilometers (1,000 miles) from McMurdo Station to Byrd Station, and then slowly drive across the remaining 640 kilometers (400 miles) of snow and ice to Pine Island Glacier.

"It's like flying from Washington to Kansas City in an aircraft, and then driving to Denver at lawn-mower speeds," Bindschadler said.

When the team returns to the ice shelf in 2010, the logistical operation and dress rehearsals will be over and the real deployment will begin. It will be the first sustained look at how water and ice interact beneath this fragile ice shelf.

NASA's researchers are eager to return so they can understand what is accelerating changes to the ice shelf -- 40 kilometers (25 miles) long and 20 kilometers (12 miles) wide -- which extends from the Pine Island Glacier and floats on the Amundsen Sea. It is the leading edge of one of the two major glaciers that drain the West Antarctic Ice Sheet. Scientists have calculated that ice flowing from the shelf has accelerated from 3.7 to 4.2 kilometers per year (2.3 to 2.6 miles) since Bindschadler's visit just a year ago.

“We want to get a sustained look at what's going on under the ice and figure out why the ice shelf is sliding more swiftly into the Amundsen Sea,” Bindschadler said.

Polar scientists are puzzled: where is the warm water coming from and how fast is it moving? Does the upwelling change by season, and exactly how is the ice shelf responding?

"We still don't have any consistent, direct measurements in the ocean" Bindschadler said. "Consistent measurements will give us better quantitative handle on how much melting is taking place."

Despite the initial setbacks, the science goals for the research expedition have not changed. "If anything, this additional time and extra planning is making us bolder," Bindschadler said. "We're daring to go to where the field challenges may be greater, but where the scientific return is also greater."