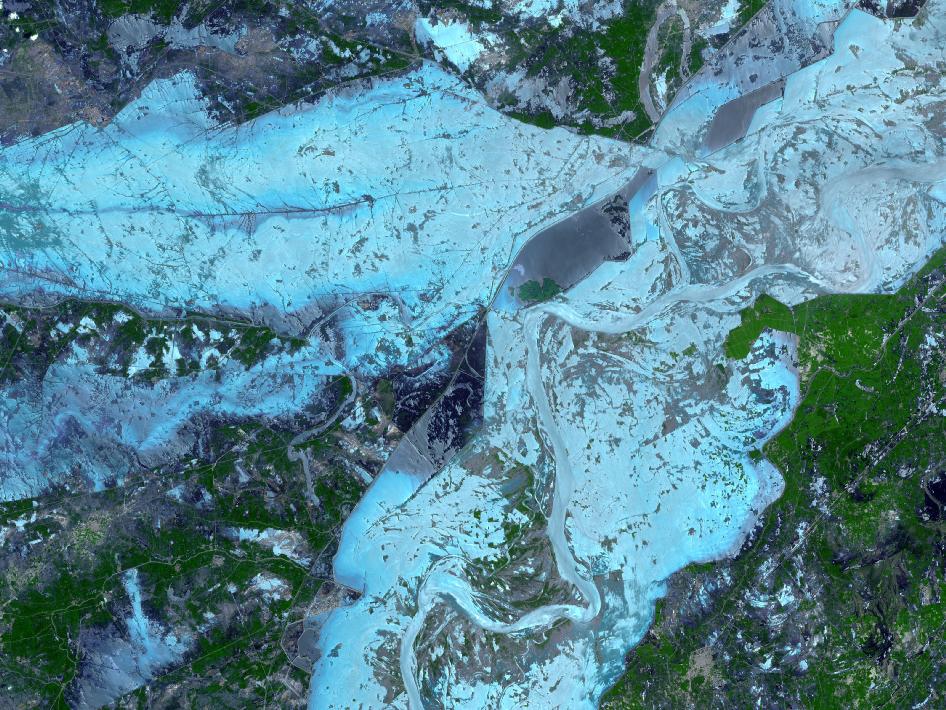 In late July 2010, flooding caused by heavy monsoon rains began in several regions of Pakistan, including the Khyber Pakhtunkhwa, Sindh, Punjab and parts of Baluchistan. According to the Associated Press, the floods have affected about one-fifth of the country. Tens of thousands of villages have been flooded, more than 1,500 people have been killed, and millions have been left homeless. The floodwaters are not expected to fully recede before late August.

The Advanced Spaceborne Thermal Emission and Reflection Radiometer (ASTER) instrument on NASA's Terra spacecraft captured this cloud-free image over the city of Sukkur, Pakistan, on Aug. 18, 2010. Sukkur, a city of a half-million residents located in southeastern Pakistan's Sindh Province, is visible as the grey, urbanized area in the lower left center of the image. It lies along the Indus River, Pakistan's longest, which snakes vertically from north to south through the image and is the basis for the world's largest canal-based irrigation system. As reported by the British Broadcasting Corporation, Sukkur is one of the few urban areas in the region that has thus far escaped widespread destruction from the flooding, which has affected an estimated 4,000,000 people in the province. Relief camps have sprung up across the city to house some of these displaced people. The land along the Indus River in this region is largely agricultural, and the flooding has taken a heavy toll on the region's crops and fruit trees.

With its 14 spectral bands from the visible to the thermal infrared wavelength region and its high spatial resolution of 15 to 90 meters (about 50 to 300 feet), ASTER images Earth to map and monitor the changing surface of our planet. ASTER is one of five Earth-observing instruments launched Dec. 18, 1999, on NASA's Terra spacecraft. The instrument was built by Japan's Ministry of Economy, Trade and Industry. A joint U.S./Japan science team is responsible for validation and calibration of the instrument and the data products.

More information about ASTER is available at http://asterweb.jpl.nasa.gov/.