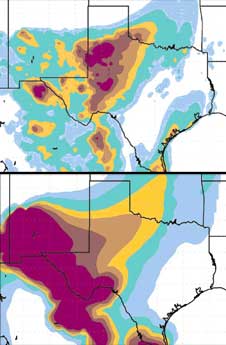 > Larger image
A computer model that incorporates NASA satellite data results in a more refined depiction of a dust storm (above), when compared to a model lacking the NASA data (below). Credit: NASA/PHAiRS 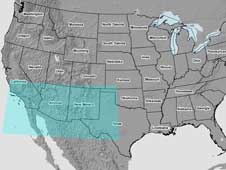 > Larger image
Areas of the U.S. Southwest identified in the blue box show the geographic region for which researchers have been verifying results from the satellite-enhanced dust model. Credit: NASA/PHAiRS 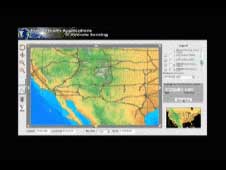 > Click to view movie
A 59-second movie highlights the visualization of the dust forecasts. Credit: Karl Benedict/University of New Mexico
NASA satellite data can improve forecasts of dust storms in the American Southwest in ways that can benefit public health managers. Scientists announced the finding as a five-year NASA-funded project nears its conclusion.

Led by investigators Stanley Morain of the University of New Mexico in Albuquerque, and William Sprigg of the University of Arizona in Tucson, scientists evaluated the influence of space-based observations on predictions of dust storms. Using NASA satellite data, forecasters could more accurately predict the timing of two out of three dust events.

NASA's Public Health Applications in Remote Sensing project, or PHAiRS, released a report on the study this month. Such forecasting capability is the first step toward a reporting system that health officials could use to warn at-risk populations of health threats and respond quickly to dust-related epidemics.

"The program has been successful in its work to improve dust storms predictions, which has important implications for air quality and respiratory distress warnings," said John Haynes, Public Health Applications program manager at NASA Headquarters in Washington.

Dust and the pathogens it carries have been blamed for exacerbating some cardiovascular and respiratory diseases, including asthma. Dust also obscures visibility on roads, which can contribute to closures and traffic accidents.

NASA launched PHAiRS in 2004 to identify how satellites could help modeling and forecasting of dust storms and to enhance a computer-based system that health managers can use to report and respond to dust-related health symptoms.

The key to better dust forecasts is to represent accurately the features that influence the behavior of dust: land topography, the proportion of land to water, and surface roughness.

"Dust modeling always has relied on surface characteristics that we knew were wrong," Sprigg said.

For instance, information in previous models about a region's features was patched together from old maps and topographic surveys, which do not accurately represent seasonal or cyclical changes in vegetation and related surface features.

Through PHAiRS, up-to-date measurements of Earth's surface features -- collected from instruments on NASA's Terra and Aqua satellites -- provided the critical details needed to enhance an existing dust model. Observations of Earth from space offer more complete information, filling in the gaps between the locations of surface measurements and providing up-to-date snapshots of changing surface features.

The team began with an existing model Slobodan Nickovic of the World Meteorological Organization in Geneva developed that describes how dust is lifted off the ground and carried in the atmosphere. Researchers coupled this model with an operational weather forecast model the U.S. National Weather Service created. The team adapted the model to accommodate dust storms in the U.S. Southwest and then introduced the new satellite-derived measurements.

After using the new model to make hourly dust forecasts for California, Arizona, New Mexico, and Texas during dust events, the team compared their results to real-world observations. They found that the NASA data improved the model estimates of wind speed, direction, near-surface temperature, and the location and amount of dust lifted off the ground. Statistics for the model's performance show that between January and April 2007, the timing of two out of three dust storms in Phoenix could be forecasted precisely.

Already, public health professionals have been enlisted to work with the PHAiRS team to assess the model's real-world utility. The team is collaborating with physicians, public health experts and community leaders in Lubbock, Texas, to integrate the NASA dust storm predictions into a computer-based decision-support system called the Syndrome Reporting Information System, which maps reported cases of respiratory distress. The satellite-enhanced system would allow health and environmental managers to "see" the next 48 hours of dust concentrations for their areas and track the number of respiratory distress situations that result.

Ultimately, the system could allow health officials to issue early warnings to populations at risk for dust-related health complications. Preliminary feedback from public health end-users about the enhanced system's performance is expected in January 2009.