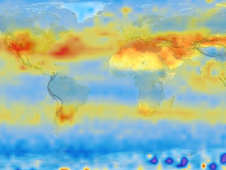 Satellites show sources and sinks of atmospheric carbon dioxide across Earth, measured here in 2003. High concentrations are shown in red and lower concentrations are shown in blue. Credit: NASA
> Larger image
The burning of fossil fuels -- notably coal, oil and gas -- has accounted for about 80 percent of the rise of atmospheric carbon dioxide since the pre-industrial era. Now, NASA researchers have identified feasible emission scenarios that could keep carbon dioxide below levels that some scientists have called dangerous for climate.

When and how global oil production will peak has been debated, making it difficult to anticipate emissions from the burning of fuel and to precisely estimate its impact on climate. To better understand how emissions might change in the future, Pushker Kharecha and James Hansen of NASA's Goddard Institute for Space Studies in New York considered a wide range of fossil fuel consumption scenarios. The research, published Aug. 5 in the American Geophysical Union's Global Biogeochemical Cycles, shows that the rise in carbon dioxide from burning fossil fuels can be kept below harmful levels as long as emissions from coal are phased out globally within the next few decades.

"This is the first paper in the scientific literature that explicitly melds the two vital issues of global peak oil production and human-induced climate change," Kharecha said. "We're illustrating the types of action needed to get to target carbon dioxide levels."

Carbon dioxide is a greenhouse gas that concerns climate scientists because it can remain in the atmosphere for many centuries and studies have indicated that humans have already caused those levels to rise for decades by burning fossils fuels. Also, carbon dioxide accounts for more than half of all human-caused greenhouse gases in the atmosphere.

Previously published research shows that a dangerous level of global warming will occur if carbon dioxide in the atmosphere exceeds a concentration of about 450 parts per million. That's equivalent to about a 61 percent increase from the pre-industrial level of 280 parts per million, but only 17 percent more than the current level of 385 parts per million. The carbon dioxide cap is related to a global temperature rise of about 1.8 degrees Fahrenheit above the 2000 global temperature, at or beyond which point the disintegration of the West Antarctic ice sheet and Arctic sea ice could set in motion feedbacks and lead to accelerated melting.

To better understand the possible trajectory of future carbon dioxide, Kharecha and Hansen devised five carbon dioxide emissions scenarios that span the years 1850-2100. Each scenario reflects a different estimate for the global production peak of fossil fuels, the timing of which depends on reserve size, recoverability and technology.

"Even if we assume high-end estimates and unconstrained emissions from conventional oil and gas, we find that these fuels alone are not abundant enough to take carbon dioxide above 450 parts per million," Kharecha said.

The second scenario considers a situation in which emissions from coal are reduced first by developed countries starting in 2013 and then by developing countries a decade later, leading to a global phase out by 2050 of the emissions from burning coal that reach the atmosphere. The reduction of emissions to the atmosphere in this case can come from reducing coal consumption or from capturing and sequestering the carbon dioxide before it reaches the atmosphere.

The remaining three scenarios include the above-mentioned phase out of coal, but consider different scenarios for oil use and supply. One case considers a delay in the oil peak by about 21 years to 2037. Another considers the implications of fewer-than-expected additions to proven reserves due to overestimated reserves, or the addition of a price on emissions that makes the fuel too expensive to extract. The final scenario looks at emissions from oil fields that peak at different times, extending the peak into a plateau that lasts from 2020-2040. 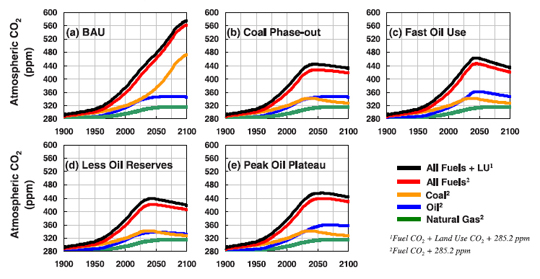 Image above: Atmospheric carbon dioxide changes over time for the study's five fossil fuel scenarios: business-as-usual (a), coal phase-out (b) and oil use and supply (c-e). Credit: NASA/Kharecha and Hansen
> Larger image

Next, the team used a simplified mathematical model, called the Bern carbon cycle model, to convert carbon dioxide emissions from each scenario into estimates of future carbon dioxide concentrations in the atmosphere.

The unconstrained "business as usual" scenario resulted in a level of atmospheric carbon dioxide that more than doubled the preindustrial level and from about 2035 onward levels exceed the 450 parts per million threshold of this study. Even when low-end estimates of reserves were assumed, the threshold was exceeded from about 2050 onwards. However, the other four scenarios resulted in carbon dioxide levels that peaked in various years but all fell below the prescribed cap of 450 parts per million by about 2080 at the latest, with levels in two of the scenarios always staying below the threshold.

The researchers suggest that the results illustrated by each scenario have clear implications for reducing carbon dioxide emissions from coal, as well as "unconventional" fuels such as methane hydrates and tar sands, all of which contain much more fossil carbon than conventional oil and gas.

"Because coal is much more plentiful than oil and gas, reducing coal emissions is absolutely essential to avoid 'dangerous' climate change brought about by atmospheric carbon dioxide concentration exceeding 450 parts per million," Kharecha said. "The most important mitigation strategy we recommend – a phase-out of carbon dioxide emissions from coal within the next few decades – is feasible using current or near-term technologies."