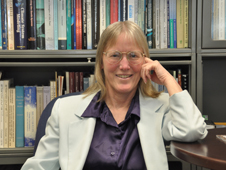 The book, entitled "Coming Climate Crisis? Consider the Past, Beware the Big Fix," will be published this week by Rowman & Littlefield.

Parkinson explains why global warming is such a big deal, summarizes 4.6 billion years of climate change on Earth, including periods when Earth was much warmer than now (and others when it was much cooler), and addresses and explains various 'geo-engineering' schemes being proposed to intentionally modify future climate.

The book includes a brief history of human impacts and predictions of what might occur in the near future. The bleak nature of some of the predictions, along with the knowledge from climate history that the Earth system is capable of abrupt climate change, make it understandable why geoengineering is being considered. However, Parkinson also explains many limitations of our computer models and potential dangers of unintended consequences, concluding that massive geoengineering "could backfire to become a greater disaster than the one we are trying to correct." She describes some of the alternatives to geoengineering that could more safely reduce the unwanted changes.

In this new book, Parkinson attempts to bring balance and perspective and clarify some of the most important and contentious points in the ongoing climate debate. While clearly enthusiastic about what we have learned through science about the history of the Earth and the intricacies of the Earth system, she also cautions against assuming that our understandings are more complete than they really are.

"This book interweaves discussion of relevant aspects of Earth history, science, the history of science, and human nature," Parkinson said. "We cannot adequately understand the present or reasonably predict the future without careful consideration of the past and of the quality of the tools at hand."

Claire Parkinson is a climatologist at Goddard, where she has worked since 1978, with a research program largely centered on satellite data analysis of sea ice and the role of sea ice in the global climate system. She is also the project scientist for the Earth-observing Aqua satellite mission, has written books on satellite imagery and on the history of science, and has coauthored a textbook on climate modeling and co-edited books on satellite observations related to global change.

Although the author is employed at Goddard, all opinions expressed in the book are those of the author and are not necessarily shared by others at NASA.

For information about "Coming Climate Crisis? Consider the Past, Beware the Big Fix," visit: