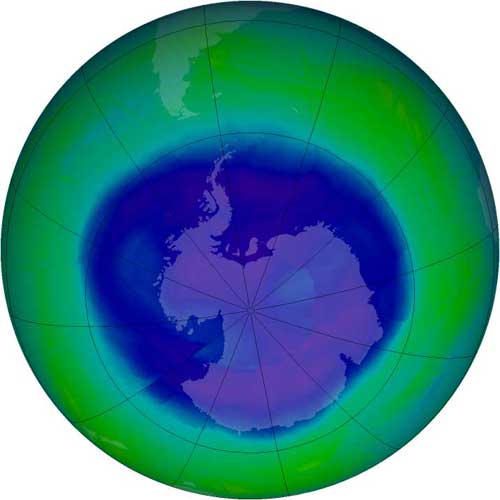 The Antarctic ozone hole reached its annual maximum on Sept. 12, 2008, stretching over 27 million square kilometers, or 10.5 million square miles. The area of the ozone hole is calculated as an average of the daily areas for Sept. 21-30 from observations from the Ozone Monitoring Instrument (OMI) on NASA’s Aura satellite.

This is considered a “moderately large” ozone hole, according to NASA atmospheric scientist, Paul Newman. And while this year’s ozone hole is the fifth largest on record, the amount of ozone depleting substances have decreased about 3.8% from peak levels in 2000. The largest ozone hole ever recorded occurred in 2006, at a size of 10.6 million square miles.

The ozone hole is a region of exceptionally depleted ozone in the stratosphere over the Antarctic that occurs at the beginning of Southern Hemisphere spring (August) and typically reaches its maximum extent in late September or early October. The ozone hole then begins to break up, with the area of depleted ozone dissipating throughout the southern mid latitudes, including parts of southern Africa, South America, Australia, and New Zealand. The resulting increase in UV radiation in those areas can potentially affect human health as well as plant and animal species.

NASA has been monitoring the status of the ozone layer through satellite observations since the 1970s. And today, NASA satellite instruments provide us with daily images of ozone over the Antarctic region, like this one, captured on Sept. 12, 2008. Continuously updated images can be found at NASA’s Ozone Hole Watch website > Ozonewatch.