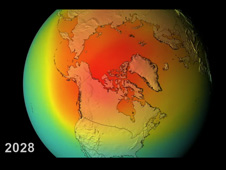 This simulation shows the seasonal rise and fall of ozone over the northern hemisphere from 1974 to 2065. Note how the geographic extent and the concentrations of ozone -- deep reds are the highest levels -- decrease around the turn of the century, then rise again. Credit: Trent Schindler, NASA's Goddard Space Flight Center
> View animation 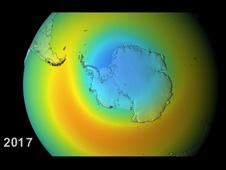 This simulation shows the seasonal rise and fall of ozone concentrations over Antarctica. Note the growth in intensity and area of the southern ozone hole (ozone deficits are blue), which heals several decades into the 21st century.
> View animation 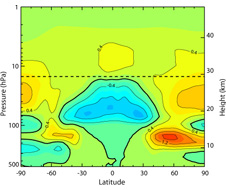 This plot of ozone concentration by latitude and altitude shows the net gain (oranges and reds) and net loss of ozone from years 1975-84 to 2060-69. Credit: Feng Li et al, NASA, published in Atmospheric Chemistry and Physics
> Larger image 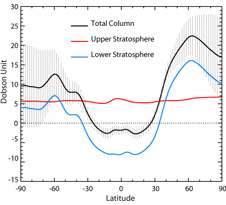 Plot of the change in ozone concentrations by latitude from years 1975-84 to 2060-69 shows a surplus over the high latitudes and a loss near the tropics and equator. Credit: Feng Li et al, NASA, published in Atmospheric Chemistry and Physics
> Larger image 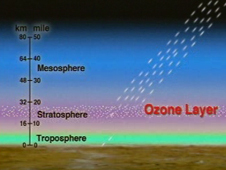 This animation depicts how the ozone layer absorbs nearly all of the biologically damaging UV radiation from the sun before it can reach Earth's surface. Credit: NASA's Scientific Visualization Studio
> View animation Earth's ozone layer should eventually recover from the unintended destruction brought on by the use of chlorofluorocarbons (CFCs) and similar ozone-depleting chemicals in the 20th century. But new research by NASA scientists suggests the ozone layer of the future is unlikely to look much like the past because greenhouse gases are changing the dynamics of the atmosphere.

Previous studies have shown that while the buildup of greenhouse gases makes it warmer in troposphere – the level of atmosphere from Earth’s surface up to 10 kilometers (6 miles) altitude – it actually cools the upper stratosphere – between 30 to 50 kilometers high (18 to 31 miles). This cooling slows the chemical reactions that deplete ozone in the upper stratosphere and allows natural ozone production in that region to outpace destruction by CFCs.

But the accumulation of greenhouse gases also changes the circulation of stratospheric air masses from the tropics to the poles, NASA scientists note. In Earth's middle latitudes, that means ozone is likely to "over-recover," growing to concentrations higher than they were before the mass production of CFCs. In the tropics, stratospheric circulation changes could prevent the ozone layer from fully recovering.

"Most studies of ozone and global change have focused on cooling in the upper stratosphere," said Feng Li, an atmospheric scientist at the Goddard Earth Sciences and Technology Center at the University of Maryland Baltimore County, Baltimore, Md. and lead author of the study. "But we find circulation is just as important. It's not one process or the other, but both."

The findings are based on a detailed computer model that includes atmospheric chemical effects, wind changes, and solar radiation changes. Li's experiment is part of an ongoing international effort organized by the United Nations Environment Programme's Scientific Assessment Panel to assess the state of the ozone layer. Li and colleagues published their analysis in March in the journal Atmospheric Chemistry and Physics.

Working with Richard Stolarski and Paul Newman of NASA's Goddard Space Flight Center, Greenbelt, Md., Li adapted the Goddard Earth Observing System Chemistry-Climate Model (GEOS-CCM) to examine how climate change will affect ozone recovery. The team inserted past measurements and future projections of ozone-depleting substances and greenhouse gases into the model. Then the model projected how ozone, the overall chemistry, and the dynamics of the stratosphere would change through the year 2100.

"In the real world, we have observed statistically significant turnaround in ozone depletion, which can be attributed to the banning of ozone-depleting substances," said Richard Stolarski, an atmospheric chemist at Goddard and a co-author of the study. "But making that connection is complicated by the response of ozone to greenhouse gases."

In Li’s experiment, this circulation pump accelerated to a rate where the ozone flowing upward and outward from the tropics created a surplus at middle latitudes. Though the concentration of chlorine and other ozone-depleting substances in the stratosphere will not return to pre-1980 levels until 2060, the ozone layer over middle latitudes recovered to pre-1980 levels by 2025.

The Arctic – which is better connected to mid-latitude air masses than the Antarctic -- benefitted from the surplus in the northern hemisphere and from the overall decline of ozone-depleting substances to recover by 2025. Globally averaged ozone and Antarctic concentrations catch up by 2040, as natural atmospheric production of ozone resumes.

This recovery in the middle and polar latitudes has mixed consequences, Li noted. It might have some benefits, such as lower levels of ultraviolet radiation reaching the Earth's surface and correspondingly lower rates of skin cancer. On the other hand, it could have unintended effects, such as increasing ozone levels in the troposphere, the layer of atmosphere at Earth’s surface. The model also shows a continuing ozone deficit in the stratosphere over the tropics. In fact, when the model run ended at year 2100, the ozone layer over the tropics still showed no signs of recovery.

In February, researchers from Johns Hopkins University, Baltimore, teamed with Stolarski and other NASA scientists on a similar paper suggesting that increasing greenhouse gases would delay or even postpone the recovery of ozone levels in the lower stratosphere over some parts of the globe. Using the same model as Li, Stolarski, and Newman, the researchers found that the lower stratosphere over tropical and mid-southern latitudes might not return to pre-1980s levels of ozone for more than a century, if ever.