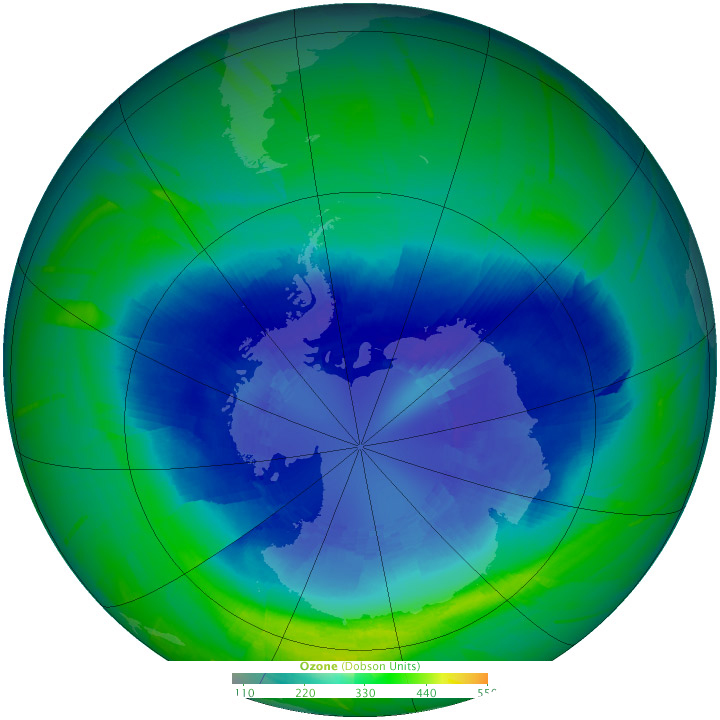 The yearly depletion of stratospheric ozone over Antarctica – more commonly referred to as the “ozone hole” – started in early August 2010 and is now expanding toward its annual maximum. The hole in the ozone layer typically reaches its maximum area in late September or early October, though atmospheric scientists must wait a few weeks after the maximum to pinpoint when the trend of ozone depletion has slowed down and reversed.

The hole isn’t literal; no part of the stratosphere — the second layer of the atmosphere, between 8 and 50 km (5 and 31 miles) — is empty of ozone. Scientists use "hole" as a metaphor for the area in which ozone concentrations drop below the historical threshold of 220 Dobson Units. Historical levels of ozone were much higher than 220 Dobson Units, according to NASA atmospheric scientist Paul Newman, so this value shows a very large ozone loss.

Earth's ozone layer protects life by absorbing ultraviolet light, which damages DNA in plants and animals (including humans) and leads to skin cancer.

The Ozone Monitoring Instrument (OMI) on NASA’s Aura satellite acquired data for this map of ozone concentrations over Antarctica on September 12, 2010. OMI is a spectrometer that measures the amount of sunlight scattered by Earth’s atmosphere and surface, allowing scientists to assess how much ozone is present at various altitudes — particularly the stratosphere — and near the ground.

So far in 2010, the size and depth of the ozone hole has been slightly below the average for 1979 to 2009, likely because of warmer temperatures in the stratosphere over the far southern hemisphere. However, even slight changes in the meteorology of the region this month could affect the rate of depletion of ozone and how large an area the ozone hole might span. You can follow the progress of the ozone hole by visiting NASA’s Ozone Hole Watch page.

September 16 is the International Day for the Preservation of the Ozone Layer, a commemoration of the day in 1987 when nations commenced the signing of the Montreal Protocol to limit and eventually ban ozone-depleting substances such as chlorofluorocarbons (CFCs) and other chlorine and bromine-containing compounds. The ozone scientific assessment panel for the United Nations Environment Program, which monitors the effectiveness of the Montreal Protocol, is expected to release its latest review of the state of the world’s ozone layer by the end of 2010. (The last assessment was released in 2006.) Newman is one of the four co-chairs of the assessment panel.

To learn more go to:
http://ozonewatch.gsfc.nasa.gov/
› Back To Top