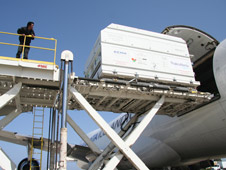 The Ocean Surface Topography Mission/Jason-2 spacecraft arrives at Vandenberg Air Force Base, Calif., following its trans-Atlantic flight from France. Image courtesy: NASA
›  Full image and caption
PASADENA, Calif. – A NASA and French Space Agency (CNES) spacecraft designed to continue a long-term survey of Earth's oceans has arrived at Vandenberg Air Force Base, Calif., for final launch preparations. The new satellite will study ocean circulation and the effect oceans have on weather, climate and how Earth is responding to global climate change.

The Ocean Surface Topography Mission, called OSTM for short, will be flown on the Jason-2 spacecraft, which was transported on April 24 from its manufacturer, Thales Alenia Space, in Cannes, France, to Toulouse, France. It was loaded onto a Boeing 747 aircraft for its trans-Atlantic journey and after refueling in Boston, it arrived April 29 at Vandenberg Air Force Base. Following final tests, it will be integrated onto a United Launch Alliance Delta II launch vehicle in preparation for a planned launch in June.

With the launch of this satellite, the science of precisely measuring and studying the height of the sea surface across Earth's oceans will come of age. Continuous collection of these measurements began in 1992 with the NASA/CNES Topex/Poseidon mission and continued in 2001 with NASA/CNES's Jason-1 mission, which is currently providing near-real-time data to a variety of users. The addition of the National Oceanic and Atmospheric Administration (NOAA) and the European Organization for the Exploitation of Meteorological Satellites (EUMETSAT) as partners on OSTM/Jason-2 begins transitioning the responsibility for collecting these data to weather and climate forecasting agencies, which will use them for short-range and seasonal-to-long-range ocean forecasting.

The 15-plus-year climate data record that this mission will continue is the only one capable of addressing how ocean circulation is linked to climate change and how global sea level, one of the most important consequences and indicators of global climate change, is changing.

Satellite observations of Earth's oceans have revolutionized our understanding of global climate by improving ocean models and hurricane forecasts, and identifying and tracking large ocean/atmosphere phenomena such as El Niño and La Niña. The data are used every day in applications as diverse as, for example, routing ships, improving the safety and efficiency of offshore industry operations, managing fisheries and tracking marine mammals.

The spacecraft will be launched into a 1,336-kilometer (830-mile) circular, non-sun-synchronous orbit at an inclination of 66 degrees to Earth's equator, allowing it to monitor 95 percent of Earth's ice-free oceans every 10 days.

The Ocean Surface Topography Mission/Jason-2 is an international and interagency mission developed and operated as a four-party collaboration among NASA; NOAA; the French Space Agency, Centre National d'Etudes Spatiales; and EUMETSAT. CNES is providing the spacecraft, NASA and CNES are jointly providing the payload instruments and NASA's Launch Services Program at the Kennedy Space Center is responsible for the launch management and countdown operations for the Delta II. After completing the on-orbit commissioning of the spacecraft, CNES will hand over operation and control of the spacecraft to NOAA. NOAA and EUMETSAT will generate the near-real-time products and distribute them to users. NASA's Jet Propulsion Laboratory, Pasadena, Calif., manages the mission for NASA's Science Mission Directorate, Washington. JPL is managed for NASA by the California Institute of Technology in Pasadena.

For more information on the Ocean Surface Topography Mission/Jason-2, visit: