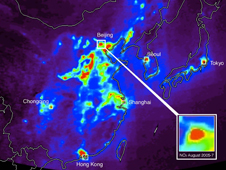 This map, an average of August 2005-07 nitrogen dioxide (NO2) levels, shows high levels of pollution in Beijing and other areas of eastern China. Credit: NASA
> Larger image 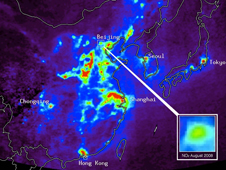 In contrast, levels of nitrogen dioxide (NO2) plunged nearly 50 percent in and around Beijing in August 2008 after officials instituted strict traffic restrictions in preparation for the Olympic Games. Credit: NASA
> Larger image
Chinese government regulators had clearer skies and easier breathing in mind in the summer of 2008 when they temporarily shuttered some factories and banished many cars in a pre-Olympic sprint to clean up Beijing’s air. And that's what they got.

They were not necessarily planning for something else: an unprecedented experiment using satellites to measure the impact of air pollution controls. Taking advantage of the opportunity, NASA researchers have since analyzed data from NASA's Aura and Terra satellites that show how key pollutants responded to the Olympic restrictions.

According to atmospheric scientist Jacquelyn Witte and colleagues from NASA's Goddard Space Flight Center in Greenbelt, Md., the emission restrictions had an unmistakable impact. During the two months when restrictions were in place, the levels of nitrogen dioxide (NO2) -- a noxious gas resulting from fossil fuel combustion (primarily in cars, trucks, and power plants) -- plunged nearly 50 percent. Likewise, levels of carbon monoxide (CO) fell about 20 percent.

Witte presented the results on behalf of the team on Dec. 16 at the fall meeting of the American Geophysical Union in San Francisco.

Some scientists have questioned whether Beijing's highly publicized air quality restrictions actually had an impact. This new data shows clearly that they did. "After the authorities lifted the traffic restrictions, the levels of these pollutants shot right back up," Witte noted.

The steep decline in certain pollutants surprised the researchers. In a preliminary analysis of the data, the effect seemed to be minimal, explained Mark Schoeberl, project scientist for the Aura mission and a contributor to the study. The reductions only became noticeable when the investigators focused tightly on the Beijing area.

"If you take a wide view, you start to pick up long distance transport of pollutants," Schoeberl said. That seemed to be the case with sulfur dioxide (SO2), which has a longer lifetime in the atmosphere. Although satellites detected reductions in levels of SO2 -- a major byproduct of coal-fired power plants and a key ingredient of acid rain -- the decline was more widespread due to a larger effort to reduce SO2 emissions across China, explained Kenneth Pickering, another Goddard scientist involved in the research.

Witte and colleagues presume that winds carried SO2 in from the heavily industrialized provinces to the south of Beijing. However, she cautions that it is difficult to capture accurate readings of sulfur dioxide from the satellites due to difficulties detecting the gas low to the ground, where it is most abundant. It's best to consider the SO2 measurements a work in progress, emphasized Pickering.

Ultimately, researchers aim to use satellite data to evaluate and refine local and regional models to predict how pollution levels respond to changes in emissions. Such models are important for understanding the integrated Earth system and aiding policymakers considering ways to reduce pollution.

Until recently, it's been difficult to improve atmospheric composition and chemistry models because scientists have had difficulty correlating "bottom up" estimates of total emissions -- tallies of likely pollution sources, such as the number of cars on the road or the amount of coal burned -- with "top down" observations from instruments on satellites. According to Pickering, data from the Netherlands-supplied Ozone Monitoring Instrument (OMI) on Aura and the Measurement of Pollution in the Troposphere (MOPITT) instrument on Terra help significantly.

Still, it will take a few years for the research team -- which includes investigators from the University of Iowa and Argonne National Laboratory in Illinois -- to perfect and finalize the models.

The team is sharing its findings with colleagues from Tsinghua University in China. “They are very interested in what we're finding," says Pickering, noting that the data from Aura and Terra are unique and will help scientists devise more accurate ways to quantify and evaluate ongoing efforts to reduce emissions.

China is currently in the midst of a sustained effort to reduce sulfur dioxide, according to the Xinhua News Agency. Officials recently decided to reinstitute a less stringent version of the Olympic driving restrictions, requiring most cars to stay off the road at least one day each week, the agency reported in October.

Sorting out what's happening over Beijing is just the beginning, says Greg Carmichael, a professor of chemical and biochemical engineering at the University of Iowa. The procedures demonstrated here, he said, offer the capability to detect emission changes and improve models the world over.