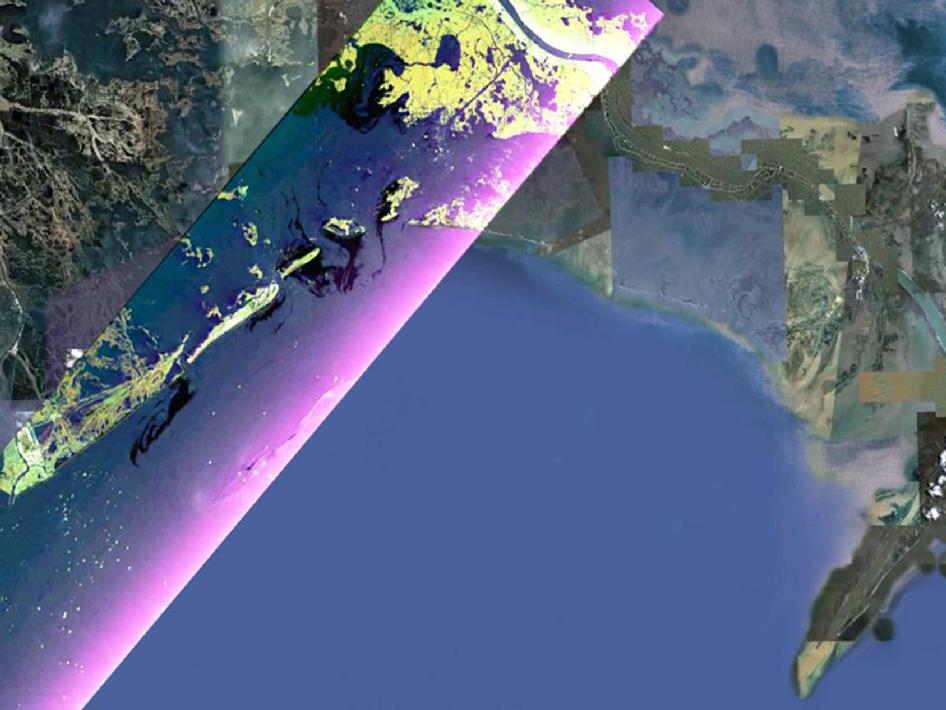 NASA's Uninhabited Aerial Vehicle Synthetic Aperture Radar (UAVSAR) flew over the Gulf of Mexico to image the Deepwater Horizon oil spill on June 22-23, 2010. The airborne radar, built and managed by NASA's Jet Propulsion Laboratory, Pasadena, Calif., currently flies aboard NASA's Gulfstream-III aircraft from NASA's Dryden Flight Research Center, Edwards, Calif. UAVSAR imaged the Gulf coastline from the Florida Keys to Corpus Christi, Texas, and collected data over several areas of open ocean throughout the Gulf. The coastal data will be used in several ways: scientists will study how L-band radars can track the extent that oil from such spills intrudes into coastal and wetland environments. They will assess the impact of oil on different types of vegetation. In addition, they will monitor how ecosystems recover after oil has impacted an area. The UAVSAR data will be combined with data collected from other remote sensing instruments, such as the JPL-built and managed Airborne Visible/Infrared Imaging Spectrometer (AVIRIS) optical/infrared instrument , to gain complementary and more comprehensive information about the oil spill and its long-term effects on Gulf ecosystems. This false-color composite UAVSAR image from June 23, 2010, shows the southern Louisiana coastline, covering the area around Grande Isle and the entrance to Barataria Bay. The colors in the image reflect the three different UAVSAR radar polarizations: HH (horizontal transmit, horizontal receive) is colored red; VV (vertical transmit, vertical receive) is colored blue; and HV (horizontal transmit, vertical receive) is colored green. Like a pair of Polaroid sunglasses, these images are sensitive to different parts of the radar signal that is reflected back from Earth's surface. The HV polarization is sensitive to multiple scattering that typically occurs in vegetation. VV polarization is sensitive to scattering from surfaces -- this gives a bluish tint to water and non-vegetated soil. Finally, HH polarization is sensitive to structures and vertical tree trunks -- this gives some urban areas and vegetated regions a reddish tint. Dark areas on the water surface are caused by something that smooths the surface and damps wave activity, such as oil. The UAVSAR data will be compared with data collected on the ground to correlate the radar measurements with the actual presence and types of oil on the ground to yield information about the properties and extent of the oil as it travels from the open ocean into wetland areas past the coastline. The high horizontal spatial resolution (6 meters, or 20 feet) of the UAVSAR radar imagery allows it to be used to monitor the intrusion of oil and oiling of vegetation on a small enough scale to provide detailed information on the spread of oil onto land through coastal waterways. UAVSAR is a reconfigurable polarimetric L-band synthetic aperture radar (SAR) specifically designed to acquire airborne repeat track SAR data for differential interferometric measurements. For more information about radar polarimetry, see http://www.ccrs.nrcan.gc.ca/resource/tutor/polarim/index_e.php. The radar will eventually be flown aboard an uninhabited, remote-piloted aircraft such as the Northrop Grumman Global Hawk. The radar was built at JPL with funding by NASA's Earth Science Technology Office. UAVSAR is managed and operated by JPL under contract with NASA's Science Mission Directorate, Washington, D.C. For more information on UAVSAR, visit http://uavsar.jpl.nasa.gov/. Image Credit: NASA/JPL--Google