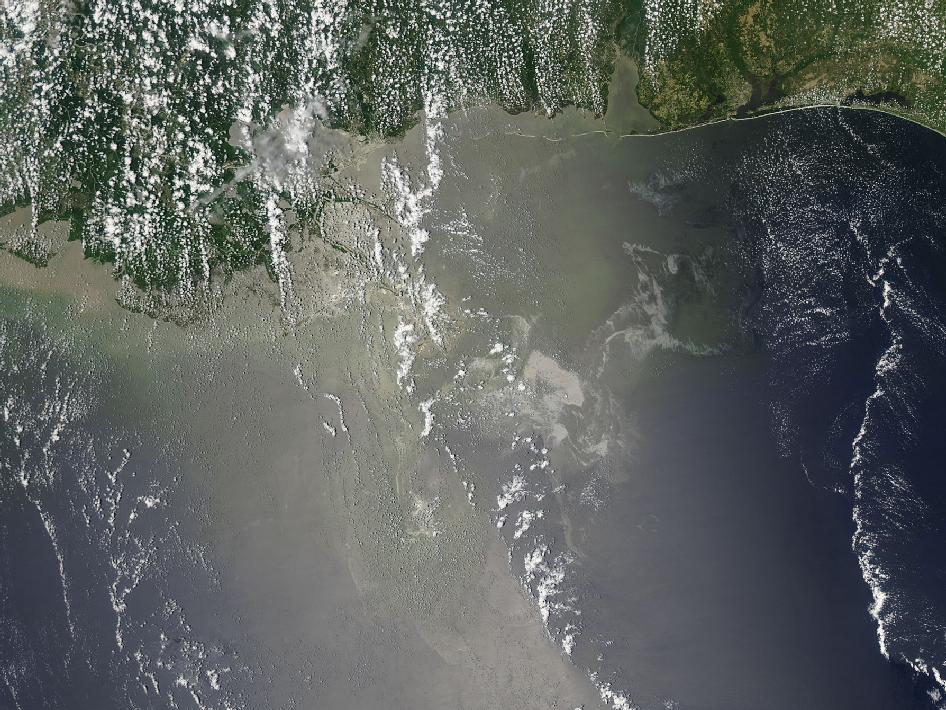 NASA's Aqua satellite flew over the Gulf of Mexico on Thursday, June 10 at 19:05 UTC (3:05 p.m. EDT) and the satellite's Moderate Resolution Imaging Spectroradiometer (MODIS) instrument captured an image of the thickest part of the oil slick.

In the image, the oil slick in the Gulf of Mexico is positioned in sunglint. In the sunglint region—where the mirror-like reflection of the Sun gets blurred into a wide, bright silvery-gray strip—differences in the texture of the water surface may be enhanced. In the thickest part of the slick, oil smooths the water, making it a better "mirror." Areas where thick oil cover the water are nearly white in this image. Additional oil may also be present.

The National Oceanic and Atmospheric Administration (NOAA) provides daily web updates on the Deepwater Horizon incident. The update from June 10, 2010, states "Offshore, satellite imagery analysis continues to indicate possible patches of sheen to the [southeast] of the main slick. A U.S. Coast Guard overflight off the west coast of Florida saw no oil. Satellite imagery from yesterday saw a possible sheen southeast of the source. Uncertainty of this anomaly was medium to high." For more details from NOAA's Incident Response update: www.incidentnews.gov/attachments/8220/528689/DeepH20web_10June.pdf