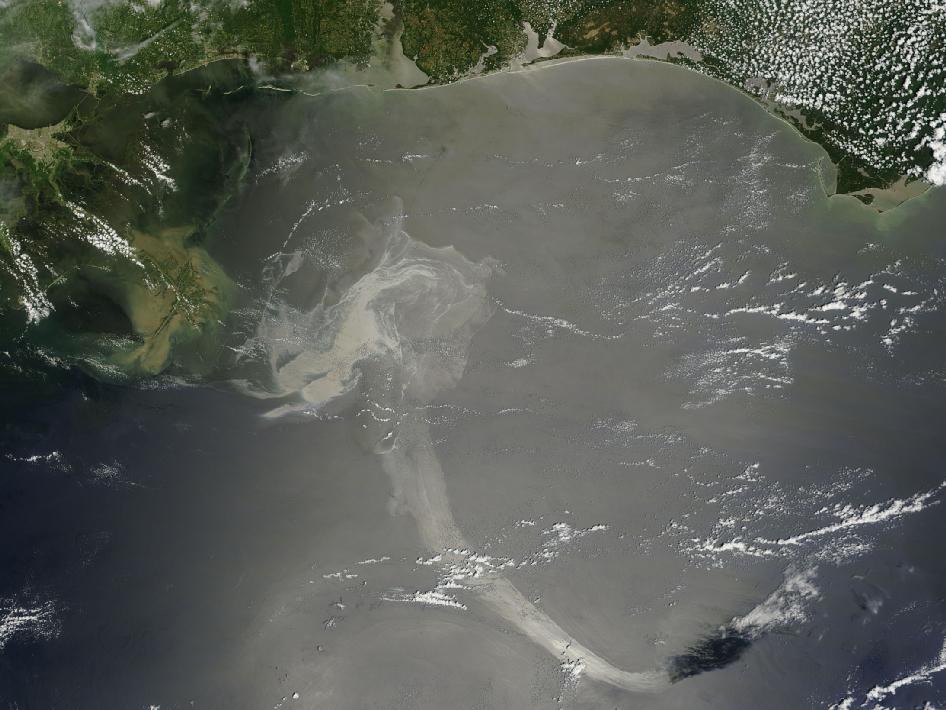 At 3 p.m. EDT on May 18, NASA's Aqua satellite swept over the Gulf of Mexico oil spill from its vantage point in space and the Moderate Resolution Imaging Spectroradiometer instrument captured sunglints in a visible image of the spill. The visible image showed three bright areas of sunglint within the area of the gray-beige colored spill. Sunglint is a mirror-like reflection of the sun off the water's surface. In calm waters, the rounded image of the sun would be seen in a satellite image. However, the waves in the Gulf blurred the reflection and created an appearance of three bright areas in a line on the ocean's surface. According to the May 18 National Oceanic and Atmospheric Administration (NOAA) web update of the Deepwater Horizon incident, "satellite imagery on May 17 indicated that the main bulk of the oil is dozens of miles away from the Loop Current, but that a tendril of light oil has been transported down close to the Loop Current." The May 18 NOAA update also noted that "NOAA extended the boundaries of the closed fishing area in the Gulf into the northern portion of the loop current as a precautionary measure to ensure seafood from the Gulf will remain safe for consumers. The closed area is now slightly less than 19 percent of the Gulf of Mexico federal waters." Image credit: NASA Goddard / MODIS Rapid Response Team Text credit: Rob Gutro / NASA's Goddard Space Flight Center