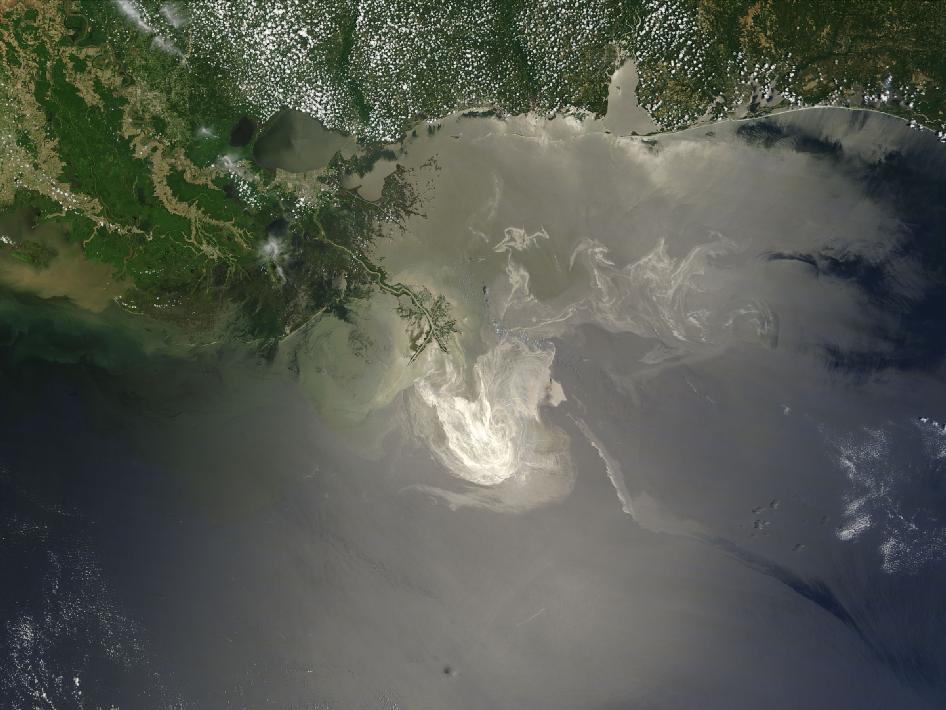 Sunlight illuminated the lingering oil slick off the Mississippi Delta on May 24, 2010. The Moderate Resolution Imaging Spectroradiometer (MODIS) on NASA’s Terra satellite captured this image the same day.

Oil smoothes the ocean surface, making the Sun’s reflection brighter near the centerline of the path of the satellite, and reducing the scattering of sunlight in other places. As a result, the oil slick is brighter than the surrounding water in some places (image center) and darker than the surrounding water in others (image lower right). The tip of the Mississippi Delta is surrounded by muddy water that appears light tan. Bright white ribbons of oil streak across this sediment-laden water.

Tendrils of oil extend to the north and east of the main body of the slick. A small, dark plume along the edge of the slick, not far from the original location of the Deepwater Horizon rig, indicates a possible controlled burn of oil on the ocean surface.

To the west of the bird’s-foot part of the delta, dark patches in the water may also be oil, but detecting a manmade oil slick in coastal areas can be even more complicated than detecting it in the open ocean.

When oil slicks are visible in satellite images, it is because they have changed how the water reflects light, either by making the Sun’s reflection brighter or by dampening the scattering of sunlight, which makes the oily area darker. In coastal areas, however, similar changes in reflectivity can occur from differences in salinity (fresh versus salt water) and from naturally produced oils from plants.