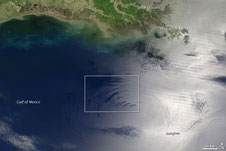 > Larger image
This wide-area view of the Gulf of Mexico was taken by the Moderate Resolution Imaging Spectroradiometer (MODIS) on NASA’s Terra satellite on May 13, 2006. The bright swath (center and right) indicates where sunlight is reflected and scattered off of the ocean surface. The streaks in the inset are oil slicks. Credit: NASA Earth Observatory About half of the oil in the ocean bubbles up naturally from the seafloor, with Earth giving it up freely like it was of no value. Likewise, NASA satellites collect thousands of images every year, but some of them get passed over because no one thinks there is a use for them.

Scientists recently found black gold bubbling up from an otherwise undistinguished mass of ocean imagery. Chuanmin Hu, an optical oceanographer at the University of South Florida, St. Petersburg, and colleagues from the National Oceanic and Atmospheric Administration (NOAA) and the University of Massachusetts–Dartmouth (UMass), found that they could detect oil seeping naturally from the seafloor of the Gulf of Mexico by examining streaks amid the reflected sunlight on the ocean's surface.

Most researchers usually discard such "sun glint" data as if they were over-exposed photos from a camera. "Significant sun glint is sometimes thought of as trash, particularly when you are looking for biomass and chlorophyll," said Hu. "But in this case, we found treasure."

The new technique could provide a more timely and cost-effective means to survey the ocean for oil seeps, to monitor oil slicks, and to differentiate human-induced spills from seeps.

Oil decreases the roughness of the ocean surface. Depending on the angles of the camera and of the light reflection, oil creates contrasting swaths that can show up in airborne images as either lighter or darker than the surrounding waters.

The detection and monitoring of oil spills and seeps by satellite is not new. Visible, infrared, microwave, and radar sensors have all been used, with synthetic aperture radar (SAR) being the most popular and reliable method in recent years according to the study authors. SAR imagery can be very expensive, the authors note, and timely, repeat coverage is not always possible, particularly in tropical regions.

Using imagery from the Moderate Resolution Imaging Spectroradiometer (MODIS) instruments on NASA's Terra and Aqua satellites, Hu and colleagues assert, is far cheaper because the data is collected daily and provided freely by NASA, without the need for special observation requests. And the polar orbits of Terra and Aqua allow images of oil slicks to be collected several times per week in tropical regions and perhaps several times a day at higher latitudes. 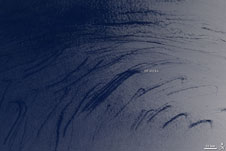 > Larger image
A close up from the MODIS sun glint image reveals dozens of natural crude oil seeps from the deep seafloor in the central Gulf of Mexico. Credit: NASA Earth Observatory The description of the new technique was published in January in Geophysical Research Letters.

Hu actually happened upon the oil imagery while looking for signs of harmful algal blooms—commonly referred to as "red tide"—in the western Gulf of Mexico. Examining MODIS images, he kept noticing streaks across the sun glint reflections. After conferring with study co-authors Xiaofeng Li and William Pichel of NOAA and Frank Muller-Karger of UMass, Hu became aware that the streaks could be oil from natural seeps on the seafloor.

Hu and colleagues then defined a geographic area of the western Gulf and obtained MODIS images for the month of May for nine consecutive years (2000 to 2008) from NASA's Goddard Space Flight Center, Greenbelt, Md. The team reviewed more than 200 images containing sun glint, and found more than 50 with extensive oil slicks.

Exactly how much oil naturally seeps out of the seafloor is unknown, and most estimates are very crude because there has never been a proper global survey made for the public record. Researchers identified the natural seepage rate as a critical unanswered question when the National Academy of Sciences compiled its third Oil in the Sea report in 2003.

"This capacity for detecting oil in the ocean has great potential, not just for oil seeps but for responding to oil spills," said Chris Reddy, a marine chemist at the Woods Hole Oceanographic Institution in Massachusetts. "Scientists might be able to use this to forensically study old spills, to watch how new ones evolve in real time, and to rule out a spill when there is none. Ultimately, this could lead to a better use of our public resources."

The technique could be useful for detecting and monitoring oil spills from ships and other platforms, though Hu emphasized that the spills must be large enough (at least hundreds of meters or feet) to be visible in the MODIS imagery. If there is suspicion of a large human-caused spill, for instance, researchers would be able to review ocean imagery to see if the slick was present before the alleged spill, indicating a natural seepage. On the other hand, MODIS satellite imagery collected on a regular basis could help coastal managers track and mitigate the effects of large accidental spills.

The new method is not perfect, as cloud cover or a lack of sun glint can limit its use. Hu and colleagues suggest it may be best used as a complement to SAR, which penetrates cloud cover and can be tilted to get the necessary imaging angle.

"If you can get an image on a two- to three-day time frame and anywhere on the globe, that's pretty spectacular," said Reddy. "The first few days are critical to tracking oil in the ocean, so it helps to be able to use technology in real time to make informed decisions about cleanup."