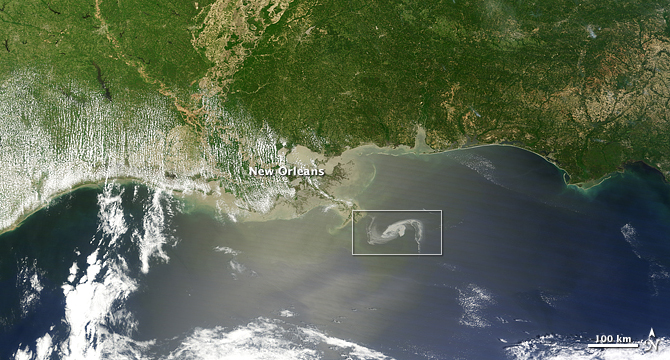 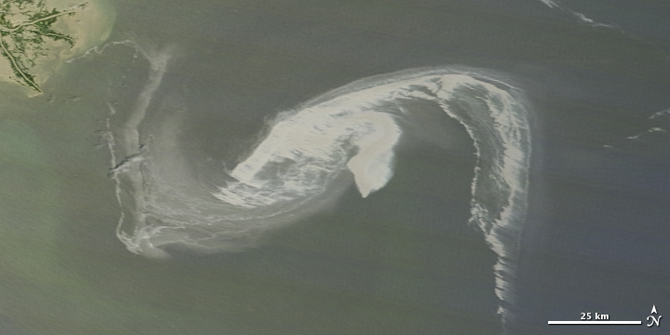 On April 29, the MODIS image on the Terra satellite captured a wide-view natural-color image of the oil slick (outlined in white) just off the Louisiana coast. The oil slick appears as dull gray interlocking comma shapes, one opaque and the other nearly transparent. Sunglint -- the mirror-like reflection of the sun off the water -- enhances the oil slick’s visibility. The northwestern tip of the oil slick almost touches the Mississippi Delta. Credit: NASA/Earth Observatory/Jesse Allen, using data provided courtesy of the University of Wisconsin’s Space Science and Engineering Center MODIS Direct Broadcast system.
› Larger image

NASA's Terra and Aqua satellites are helping the National Oceanic and Atmospheric Administration (NOAA) keep tabs on the extent of the recent Gulf oil spill with satellite images from time to time. NOAA is the lead agency on oil spills and uses airplane fly-overs to assess oil spill extent.

A semisubmersible drilling platform called the Deepwater Horizon located about 50 miles southeast of the Mississippi Delta experienced a fire and explosion at approximately 11 p.m. CDT on April 20. Subsequently, oil began spilling out into the Gulf of Mexico and efforts to contain the spill continue today. NASA's Terra and Aqua satellite imagery has captured the spill in between cloudy days. 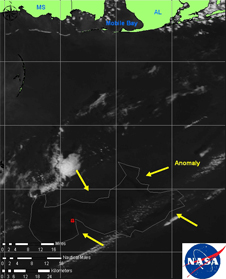 This satellite image from NASA's Terra satellite on April 27 at 12:05 CDT shows the outline and extent of the oil slick from the Deepwater Horizon drilling platform. The red dot represents the platform. The coasts of Mississippi and Alabama appear at the top of the image. Credit: NOAA/NASA
› Larger image In the satellite image from April 27 at 12:05 p.m. CDT the MODIS image showed that the oil slick was continuing to emanate from the spill location. Individual slicks lay just north of 29 degrees and zero minutes north, where they have been noted in the days before. Oil had spread further east and the edge of the slick passed 87 degrees and 30 minutes west compared to the MODIS image taken on April 26. The April 26 satellite image came from NASA's Aqua satellite.

On April 29, the MODIS image on the Terra satellite captured a natural-color image of the oil slick just off the Louisiana coast. The oil slick appeared as dull gray interlocking comma shapes, one opaque and the other nearly transparent. The northwestern tip of the oil slick almost touches the Mississippi Delta.

Deepwater Horizon had more than120 crew aboard and contained an estimated to 17,000 barrels of oil (700,000 gallons) of number two fuel oil or marine diesel fuel.

Today, April 30, NOAA declared the Deepwater Horizon incident "a Spill of National Significance (SONS)." A SONS is defined as, "a spill that, due to its severity, size, location, actual or potential impact on the public health and welfare or the environment, or the necessary response effort, is so complex that it requires extraordinary coordination of federal, state, local, and responsible party resources to contain and clean up the discharge" and allows greater federal involvement. NOAA's estimated release rate of oil spilling into the Gulf is estimated at 5,000 barrels (210,000 gallons) per day based on surface observations and reports of a newly discovered leak in the damaged piping on the sea floor.

NOAA reported on April 29 that dispersants are still being aggressively applied to the oil spill and over 100,000 gallons have been applied. NOAA's test burn late yesterday was successful and approximately 100 barrels of oil were burned in about 45 minutes. NOAA is flying planes over the area and using NASA satellite imagery from the Terra and Aqua satellites to monitor the spill.

› NASA image of the oil slick as it appeared on April 25
› Earth Observatory images of explosion, leak at Gulf of Mexico oil well
› MODIS automatically generated satellite data for the region
› Images of the spill from NASA Goddard's Flickr page
› NOAA's up-to-date assessment of the Deepwater Horizon Incident, Gulf of Mexico
› Scientists Find Black Gold Amidst Overlooked Data (02.18.09)
› Back To Top