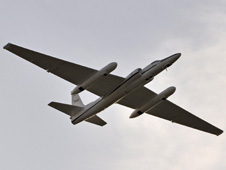 NASA sent its ER-2 research aircraft from California to Texas on May 6 for a series of flights to map the oil spill and coastal areas with an advanced instrument onboard. Credit: NASA
› Larger image 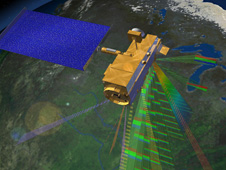 Images from space taken by instruments on Terra and other NASA satellites are providing disaster response officials with regular views of the extent of the oil spill. Credit: NASA
› Larger image 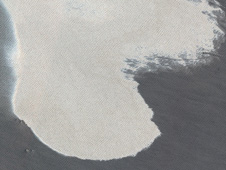 Views of the Gulf of Mexico oil spill from the Advanced Land Imager on NASA's Earth Observing-1 satellite, like this one from April 25, are giving disaster response officials close-up views of the spill. Credit: NASA
› Larger image

NASA has mobilized its remote-sensing assets to help assess the spread and impact of the Deepwater Horizon BP oil spill in the Gulf of Mexico at the request of U.S. disaster response agencies.

As part of the national response to the spill, NASA deployed its instrumented research aircraft the Earth Resources-2 (ER-2) to the Gulf on May 6. The agency is also making extra satellite observations and conducting additional data processing to assist the National Oceanic and Atmospheric Administration (NOAA), the U.S. Geological Survey (USGS), and the Department of Homeland Security in monitoring the spill.

"NASA has been asked to help with the first response to the spill, providing imagery and data that can detect the presence, extent, and concentration of oil," said Michael Goodman, program manager for natural disasters in the Earth Science Division of NASA's Science Mission Directorate in Washington. "We also have longer-term work we have started in the basic research of oil in the ocean and its impacts on sensitive coastal ecosystems."

At NOAA's request, NASA sent the ER-2 outfitted with the Airborne Visible/Infrared Imaging Spectrometer (AVIRIS) and the Cirrus Digital Camera System to collect detailed images of the Gulf of Mexico and its threatened coastal wetlands. The camera system is supplied by NASA’s Ames Research Center, Moffett Field, Calif.

NASA pilots flew the ER-2 from NASA's Dryden Flight Research Center in California to a temporary base of operations at Johnson Space Center's Ellington Field in Houston. Along the way, the plane collected data over the Gulf coast and the oil slick to support spill mapping and document the condition of coastal wetlands before oil landfall. The ER-2 made a second flight on May 10 and more flights are planned.

The AVIRIS team led by Robert Green of NASA's Jet Propulsion Laboratory is measuring how the water absorbs and reflects light in order to map the location and concentration of oil, which separates into a widespread, thin sheen and smaller thick patches. Satellites can document the overall extent of the oil but cannot distinguish between the sheen and thick patches. While the sheen represents most of the area of the slick, the majority of the oil is concentrated in the thicker part. AVIRIS should be able to identify the thicker parts, helping oil spill responders know where to deploy oil-skimming boats and absorbent booms.

Researchers also plan to measure changes in vegetation along the coastline and assess where and how oil may be affecting marshes, swamps, bayous, and beaches that are difficult to survey on the ground. The combination of satellite and airborne imagery will assist NOAA in forecasting the trajectory of the oil and in documenting changes in the ecosystem.

From the outset of the spill on April 20, NASA has provided satellite images to federal agencies from the Moderate Resolution Imaging Spectroradiometer (MODIS) instruments on NASA's Terra and Aqua satellites; the Japanese Advanced Spaceborne Thermal Emission and Reflection Radiometer (ASTER) on Terra; and the Advanced Land Imager (ALI) and Hyperion instruments on NASA's Earth Observing-1 (EO-1) satellite. All of these observations have been funneled to the Hazards Data Distribution System operated by the USGS.

With its very wide field of view, MODIS provides a big-picture of the oil spill and its evolution roughly twice per day. The Hyperion, ALI, and ASTER instruments observe over much smaller areas in finer detail but less often (every 2-5 days).

Other NASA satellite and airborne instruments are collecting observations of the spill to advance basic research and to explore future remote-sensing capabilities. From space, the Multi-angle Imaging Spectroradiometer (MISR) on Terra and the Atmospheric Infrared Sounder (AIRS) on Aqua as well as the Cloud-Aerosol Lidar with Orthogonal Polarization (CALIOP) on the joint NASA-France CALIPSO satellite are collecting data.

Another NASA research aircraft, the King Air B-200 from Langley Research Center in Hampton, Va., was previously scheduled to fly to California this week but changed its flight plan to collect data over the area of the oil spill. It completed its first flight over the spill on May 10.

The High Spectral Resolution Lidar (HSRL) onboard the plane uses pulses of laser light to locate and identify particles in the environment. Led by Chris Hostetler of Langley, HSRL provides measurements similar to those from the CALIOP instrument on CALIPSO. Data from these space-based and airborne lidars will be used to investigate the thickness of the oil spill below the surface of the water and evaluate the impacts of dispersants used to break up the oil.

"Although NASA's primary expertise is in using remote-sensing instruments to conduct basic research on the entire Earth system, our observations can be used for societal benefit in response to natural and technological disasters like this oil spill," said Goodman.