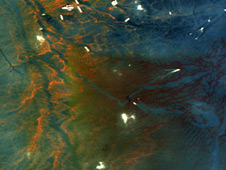 AVIRIS maps like this one over the Louisiana coast will be used to provide a baseline of ecosystems and habitats that can be compared with data from future AVIRIS flights to assess the impacts of the oil spill.
Image credit: NASA/JPL-Caltech/Dryden/USGS/UC Santa Barbara
› Larger image 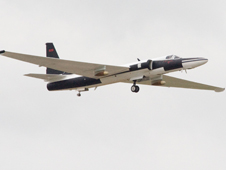 NASA's Airborne Visible/Infrared Imaging Spectrometer (AVIRIS) instrument collected an image over the site of the Deepwater Horizon BP oil rig disaster on May 17, 2010. Crude oil on the surface appears orange to brown. Scientists are using spectroscopic methods to analyze measurements for each point in images like this one to detail the characteristics of the oil on the surface.

AVIRIS extensively mapped the region affected by the spill during 11 flights conducted between May 6 and May 25, 2010, at the request of the National Oceanic and Atmospheric Administration. In total, AVIRIS measured more than 100,000 square kilometers (38,610 square miles) in support of the national oil spill response. The instrument flew at altitudes of up to 19,800 meters (65,000 feet) aboard a NASA ER-2 aircraft from NASA's Dryden Flight Research Center, Edwards, Calif.

AVIRIS is using imaging spectroscopy to map the occurrence and condition of oil on the surface of the Gulf, and to estimate the amount of oil on the surface to help scientists and responding agencies better understand the spill and how to address its effects. In addition, coastline maps created from the AVIRIS overflights will be used to provide a baseline of ecosystems and habitats that can be compared with data from future AVIRIS flights to assess the oil spill's impacts.

Figure 1 depicts AVIRIS imaging spectrometer measurements along the Gulf coast to measure the characteristics and condition of the ecosystem and habitat prior to possible oil contamination and impact. The location is near Johnson's Bayou and along the Gulf Beach Highway, between Port Arthur, La., to the west and Cameron, La., to the east. The west corner of the image includes part of the Texas Point National Wildlife Refuge. The 224 wavelengths of light measured by AVIRIS from visible to infrared are depicted in the top and left panels. The spectrum measured for each point in the image will be used to help assess the characteristics and conditions of the coastal ecosystems and habitats.

AVIRIS data provide scientists with many different types of information about the spill. Researchers at the U.S. Geological Survey's Spectroscopy Laboratory in Golden, Colo., are working to determine the characteristics of the oil based upon the AVIRIS measured spectral signature. As shown in Figure 2, acquired May 17, 2010, the signature of the oil measured in the infrared portion of the spectrum allows scientists to measure the occurrence and condition of oil and estimate the thickness of oil on the water's surface, Figure 3 depicts AVIRIS oil spill flight line measurements acquired on May 17, 2010, superimposed on a background regional image.