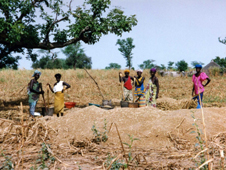 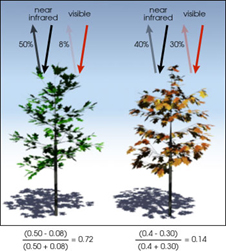 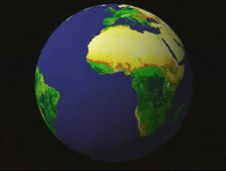 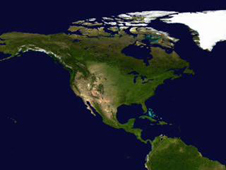 An animation of monthly NDVI values illustrates the annual "green up" that takes place during the spring and summer in the United States. Credit: NASA/Goddard Space Flight Center
› Larger image
› View video (mpg) In the early 1980s, scientists at NASA's Goddard Space Flight Center, Greenbelt, Md., developed the Normalized Difference Vegetation Index (NDVI), an innovative combination of two satellite measurements that allowed them to analyze changes in the "greenness" of Earth as viewed from space. Much like measurements from weather satellites allow meteorologists to track and monitor hurricanes, NDVI lets scientists track droughts, crop infestations, and even full-blown crop failures that lead to widespread famine.

Few non-scientists have ever heard of NDVI, yet this vital sign of the planet has important implications for everyone, said Molly Brown, a Goddard scientist who has N-D-V-I emblazoned on her car's license plate. NDVI has been used to study everything from the spread of disease to the archaeological remains of ancient Rome.

Perhaps most important, Brown said, is that this remote sensing tool will play a key part in helping us to keep food on the table as future populations swell, the climate changes, and pressures on the agricultural system mount.

It’s a bit murky as to when, where, and who first developed the equation that scientists use today to calculate NDVI. It first appeared in a 1973 symposium report to NASA from Texas A&M University researchers.

The full potential of NDVI didn't become clear until Compton Tucker of NASA -- along with colleagues Brent Holben, Christopher Justice, John Townshend, Sam Goward, and Steve Prince -- developed an image-compositing technique in the 1970s and 1980s that made it possible to assemble cloud-free NDVI maps over large regions. The work culminated with an NDVI map of Africa's vegetation on the cover of Science in 1985.

"It was eye-opening," said Forrest Hall, a physicist at Goddard and a veteran NDVI researcher. "With composited NDVI images, suddenly we could see a cloud-free Earth and how all of the different types of vegetation on Earth fit together and how they changed over time."

What had Tucker used to create this groundbreaking map of Africa? The satellite instruments measure the infrared and visible light reflected from plant leaves, and Tucker then calculated a normalized ratio of these two “channels." This ratio changes depending on the density of chlorophyll in green leaves of vegetation.

Since chlorophyll -- the green pigment that plants use to turn sunlight into carbohydrates and hence energy -- absorbs visible light, healthy plants reflect less red light and therefore have a higher NDVI than those with sparse or unhealthy leaves.

On Tucker's maps, the sparsely vegetated areas of the Sahara and the Sahel region have NDVI values near zero. The dense jungles of Central Africa have an NDVI closer to 1, the highest value.

Keeping Food on the Table

NDVI is a remarkably versatile measurement, but monitoring the global food supply has emerged as one of its particularly important uses. By comparing NDVI from one year to previous years, scientists can see tell-tale signs that crops are healthy and vigorous or suffering from drought, insect infestation, or some other problem.

The U.S. Agency for International Development's Famine Early Warning Systems Network (FEWS NET) uses NDVI as its primary tool for anticipating food shortages and failed harvests. FEWS NET provides near real-time data to 20 African countries -- as well as Guatemala, Haiti, and Afghanistan -- about the risks of famine based on NDVI and complementary environmental data.

Satellite data alone cannot cure the world of famine, Brown notes, but systems like FEWS NET can buy critical time for governments and relief organizations to react when droughts, wars, and infestations strike the food supply.

NDVI has proven particularly useful in some of the world’s most contentious hotspots. In 2008, the FAS, FEWS NET, and a number of other partners used NDVI to monitor wheat yields in Iraq and Afghanistan through a persistent drought that led to the worst yields in a decade.

Closer to home, NDVI is also used in certain states as a basis for a novel crop insurance program managed by the USDA. And it's used by ranchers in the American Southwest, as part of the "Range View" monitoring network, to locate the best areas for cattle to forage.

Solution for a Hungry, Crowded World

The United Nations projects Earth’s population will surpass 9 billion people by 2050, up from the current 6.8 billion. Since the 1990s, commodity prices have risen and the amount of cultivated land per person has declined. The result: many poor communities are ending up with less access to locally grown food even as global food supplies are increasing.

Already, researchers estimate that 30 percent of the rural populations of developing countries lack reliable access to food because of poverty. Meanwhile, models suggest that climate change could create an El-Niño like effect in the Indian Ocean that causes more droughts in key agricultural areas of the Americas, Africa, and Asia.

Such findings cause Brown and others to worry that areas already struggling with food shortages may face even graver problems in the future. But she also remains hopeful that scientific and technological tools like NDVI can provide critical information to help us blunt the worst of the problems. Improving early prediction systems may be as important in preventing famine as improving farming techniques and food aid policies for ensuring a sustainable future.