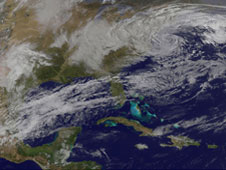 > View larger image
> View movie of the storm
This is a still image of the well-developed storm on March 15, 2010 at 2115 UTC (4:15 p.m. ET) the New England coast. Credit: NASA GOES Project The northeastern U.S. was subjected to heavy flooding and damage from late winter storms, and the Geostationary Operational Environmental Satellite, GOES-12 captured a movie of those storms as they dumped heavy rainfall between March 8 and 16, 2010.

"Following the Nor'easter 'parade of blizzards' in February this year, another week-long parade of storms flooded the upper Midwest and Northeastern U.S. in March," said Dennis Chesters of the NASA GOES Project at NASA's Goddard Space Flight Center in Greenbelt, Md. "The merge of three storms in the Midwest was unusual, where the normal pattern is a series of spring storms carried by the prevailing westerlies (winds)."

The GOES-12 operated by the National Oceanic and Atmospheric Administration (NOAA) captures images of U.S. East Coast weather. Those images from March 8-16, 2010 were compiled into a movie by the NASA GOES Project at NASA's Goddard Space Flight Center, Greenbelt, Md.

The movie was created by overlaying the clouds observed several times per hour by NOAA's GOES Imager onto a true-color map previously derived from NASA's Moderate Imaging Spectroradiometer (MODIS) land-mapping instrument. The infrared channels on GOES detect clouds day and night, which are portrayed as grey for low clouds and white for high clouds. The movie compresses nine days into two minutes. It illustrates how continental-scale land/sea/air phenomena come together to make large late winter storms. 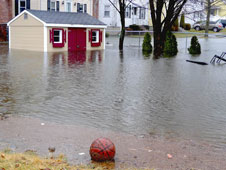 > View larger image
Three days of steady rain in excess of 9 inches filled in backyards, basements, playgrounds, streets and caused widespread flooding. Many residents near this area of Quincy, Mass. had to be rescued from their homes. Credit: Deborah Barrett, Quincy, Mass. Heavy rains that hit the northeast cause flooding, fatalities, power outages and damages. Downed trees from rain-soaked roots toppled power lines. Outages were reported in Connecticut, Maine, New Jersey, New York and Pennsylvania. Literally thousands of trees were reported felled in Connecticut and New York. Flooding forced evacuations and put roadways under water. As far north as Maine, parts of the state received more than eight inches of rain.

The Federal Emergency Management Agency or FEMA noted on March 16, that "The rain of the past few days had finally come to an end across most of New England. However, many of the smaller rivers and streams remain in minor to moderate flood. There are also a few of the small and mid-sized rivers and streams that have yet to crest. The Charles River in Medway, Mass.; the Ipswich River in Ipswich, Mass.; and the Taunton River in Bridgewater, Mass. have yet to crest. The flood warning for streams and small rivers has been extended into Tuesday morning (March 16)." 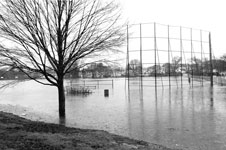 > View larger imageThe recent flood waters from Furnace Brook inundated O'Rourke Field in Quincy, Mass. Credit: Deborah Barrett, Quincy, Mass. As the rains ended, widespread flooding continued through March 16 in much of eastern Massachusetts and Rhode Island, where it ranged from moderate to major. There were two rivers that flooded to record levels during this event: the Pawtuxet River at Cranston, R.I. and the Shawsheen River in northeastern Mass.

This late winter rain event will go down in history and the 2010 severe weather season is just beginning.