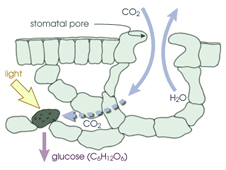 As plants ‘breathe’ and ‘perspire’ they help cool the atmosphere. Plants consume carbon dioxide—a significant greenhouse gas—in the process of photosynthesis. The reduction of carbon dioxide in the atmosphere has an indirect cooling effect. Plants also cool the atmosphere because they release water vapor when they get hot, a process similar to sweating. The diagram shows the microscopic structure of a leaf, and the processes of photosynthesis and transpiration.
Credit: NASA
> Larger image Through a recent modeling experiment, a team of NASA-funded researchers have found that future concentrations of carbon dioxide and ozone in the atmosphere and of nitrogen in the soil are likely to have an important but overlooked effect on the cycling of water from sky to land to waterways.

The researchers concluded that models of climate change may be underestimating how much water is likely to run off the land and back into the sea as atmospheric chemistry changes. Runoff may be as much as 17 percent higher in forests of the eastern United States when models account for changes in soil nitrogen levels and atmospheric ozone exposure.

"Failure to consider the effects of nitrogen limitation and ozone on photosynthesis can lead us to underestimate regional runoff," said Benjamin Felzer, an ecosystem modeler at Lehigh University in Bethlehem, Pa. "More runoff could mean more contamination and flooding of our waterways. It could also mean fewer droughts than predicted for some areas and more water available for human consumption and farming. Either way, water resource managers need more accurate runoff estimates to plan better for the changes."

Felzer and colleagues from the Massachusetts Institute of Technology (MIT) in Cambridge and the Marine Biology Laboratory in Woods Hole, Mass., published their findings recently in the Journal of Geophysical Research – Biogeosciences.

Plants play a significant role in Earth’s water cycle, regulating the amount of water cycling through land ecosystems and how long it stays there. Plants draw in water from the atmosphere and soil, and they discharge it naturally through transpiration, the tail end of photosynthesis when water vapor and oxygen are released into the air.

The amount of water that plants give up depends on how much carbon dioxide is present in the atmosphere. Studies have shown that despite a global drop in rainfall over land in the past 50 years, runoff has actually increased.


Water continually circulates from the ocean to the atmosphere to the land and back again to the ocean, as shown here in an interactive illustration of the basic “hydrological”, or water, cycle. In his study, Felzer shows the influence that CO2, nitrogen and ozone exposure also have on this cycle, factors often overlooked when considering the origins of and changes in runoff beyond those caused by rain and climate.
Credit: NASA JPL-Global Climate Change

Other studies have shown that increasing CO2 is changing how plant "pores," or stomata, discharge water. With elevated CO2 levels, leaf pores contract and sometimes close to conserve internal water reserves. This "stomatal conductance" response increases water use efficiency and reduces the rate of transpiration.

Plants that release less water also take less of it from the environment. With less water being taken up by plants, more water is available for groundwater or runs off the land surface into lakes, streams, and rivers. Along the way, it accumulates excess nutrients and pollutants before emptying into waterways, where it affects the health of fish, algae, and shellfish and contaminate drinking water and beaches. Excess runoff can also contribute to flooding.

Sometimes rising CO2 has the opposite effect, Felzer noted, promoting vegetation growth by increasing the rate of photosynthesis. More plant growth can lead to a thicker canopy of leaves with increased transpiration and less runoff. However, this effect has been shown to be smaller than the effect of reduced stomatal conductance.

Aware of these cycles, Felzer and colleagues used theoretical models to project various future scenarios for the amount of carbon dioxide in the atmosphere and what it would mean to the changing water cycle in forests east of the Mississippi River. They found that runoff would increase anywhere from 3 to 6 percent depending on location and the amount of the increase in CO2.

Felzer and colleagues also examined the role of two other variables -- atmospheric ozone and soil-based nitrogen -- in the changing water cycle. Excess ground-level ozone harms the cells responsible for photosynthesis. Reductions in photosynthesis leads to less transpiration and cycling of water through leaves and more water added to runoff.

"Though this study focuses on Eastern U.S. forests, we know nitrogen and ozone effects are also important in South America and Europe. One region has seen a net increase and the other a net runoff reduction," said co-author Adam Schlosser of the Center for Global Change Science at MIT. "Our environment and quality of life depend on less uncertainty on this front."

> How Plants Can Change Our Climate

> Who is Ben Felzer?