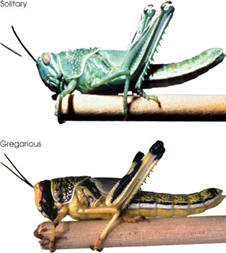 Environmental conditions can cause desert locusts to enter a "gregarious" phase in which they change colors, become more active, and congregate in large swarms. Credit: NASA Earth Observatory
› Larger image 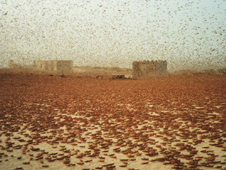 Swarms typically contain between 40 and 80 million locusts per square kilometer. This swarm passed through Nouakchott, the largest city in Mauritania. Credit: Food and Agriculture Organization of the United Nations
› Larger image 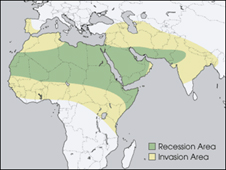 During quiet periods, known as recessions, desert locusts live within the semi-arid and arid areas of Northern Africa. However, as shown in yellow, desert locusts can spread over a much larger area during swarms. Credit: NASA Earth Observatory
› Larger image 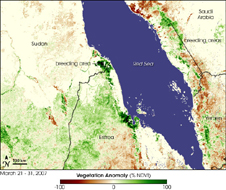 Swarms are not visible from space, but the vegetation that they depend upon is readily detectable. In green, this NDVI-based map shows areas with especially lush vegetation, which serve as fertile breeding grounds for locusts. Credit: NASA Earth Observatory
› Larger image Locusts, the grasshopper-like insects of Biblical lore, are normally docile creatures that prefer solitary lives in the desert, away from other members of their species. But sometimes, when the rains come and patches of green begin to dot dry landscapes, their populations skyrocket and something extraordinary can happen. Hormonal changes, triggered by crowding, can cause the insects to change color, become more active and congregate in huge swarms capable of decimating crops.

In the 1980s, scientists at NASA's Goddard Space Flight Center and the United Nations' Food and Agriculture Organization (FAO) teamed up to develop a monitoring system that used satellite observations and other environmental data to monitor vegetation in the deserts of Africa, the Middle East and Asia for signs that swarms may be imminent. The Desert Locust Information Service (DLIS) used the satellite-derived Normalized Difference Vegetation Index (NDVI) -- based on the ratio of red and infrared radiation reflecting off the leaves of plants -- to detect where deserts were greening the most.

Compared to previous attempts to study vegetation from space, NDVI represented a vast improvement. Scientists could determine whether plant growth was significantly more or less productive than usual over a given time period -- just what they needed to predict whether locusts were likely to swarm. The advance gave officials precious time to target worrisome locust populations with pesticides before they could swarm and take their toll on crops.

Ironing Out the Wrinkles

Though state-of-the-art at the time, the system had a few shortcomings. For instance, bare soil in deserts can register an NDVI value similar to that of sparse vegetation. As a result, DLIS has occasionally issued false alarms, interpreting vegetation growth where there was none and missing the development of some real vegetation.

"If DLIS warns locust control teams of a risk and then it doesn't materialize, or if it misses places where vegetation and swarms may be developing, then officials could be less apt to mobilize the next time," said Pietro Ceccato, an associate research scientist at Columbia University, N.Y., who has also worked with the FAO on its locust monitoring system.

That system has evolved over the years, particularly since the arrival of the MODIS instruments on NASA's Terra and Aqua satellites, which offer a considerably better view than previous instruments. Since 2002, locust monitors at DLIS have supplemented NDVI with information from an additional channel -- the shortwave infrared -- to create composite images that better account for the differences between vegetation and bare soil.

While NDVI remains the most important tool available to monitor locusts from space, remote sensing specialists are hardly resting on their NDVI laurels. For instance, the Goddard group that helped create NDVI and FAO’s locust monitoring system continues to refine its ability to screen out extraneous data and increase image resolution.

The impulse to refine NDVI isn't limited to locust studies. Small particles in the atmosphere (aerosols) and water vapor can make interpreting NDVI measurements difficult in some situations, explained Susan Ustin, a remote sensing expert at the University of California-Davis. Clouds, especially thin cirrus clouds, also can contaminate short-term measurements. And the color of soil can cause complications because vegetation over dark soils produces higher NDVI values than the same amount of vegetation over light soils.

As technology has advanced, scientists have attempted to overcome such problems by developing dozens of experimental indices, many of which are based upon NDVI. "It seems like a new index comes out every month," said Ustin. In fact, there are so many new indices being developed for such a variety of situations that's it's sometimes difficult for researchers to agree on which are worth pursuing.

Another problem with all the new indices, said Compton Tucker, a scientist at NASA Goddard who pioneered the use of NDVI, is that many are geared toward such specific ecosystems and environments that they aren't useful globally. There's a risk of creating niche products that won’t allow researchers to see the bigger, global picture.

"Most of the new indices will never make it out of the lab," said Steve Running, a vegetation scientist at the University of Montana and member of the Intergovernmental Panel on Climate Change. "But I think that we'll eventually come up with one or two alternatives that we can use to complement NDVI."