Grow Text SizeShrink Text Size
It's a Bird, It's a Missile... It's an Airplane!

When Patrick Minnis saw video of the "mystery" contrail Nov. 9 that looked like a missile launch near Catalina Island off Los Angeles, he figured it the way most people did. 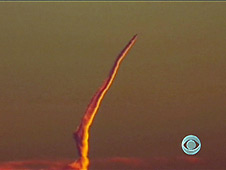 "I assumed it was a missile," said Minnis, a contrail expert in the Science Directorate at NASA's Langley Research Center in Hampton, Va.

Then he got a call from an Associated Press reporter and told her, yes, it sure looks like a missile.

Minnis usually studies contrails to determine their effect on Earth's climate. He and others have discovered that airplane contrails create cirrus clouds on days they wouldn't usually exist. Because of this, he calculates, the cirrus-cloud cover over the United States is increasing by one percent each decade and contributing to global warming by blocking the release of heat from the planet.

Minnis applied his years of research experience – and a little detective work - to the contrail mystery by examining the video again. 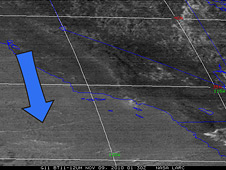 The 'mystery' contrail is visible as a horizontal white streak in the middle of the lower left quadrant of this image, captured by the Geostationary Operational Environmental Satellite 11. The satellite is a partnership between NASA Goddard Space Flight Center and the National Oceanographic and Atmospheric Administration (NOAA). Credit: NASA/NOAA

He took another look, this time with the help of Doug Spangenberg, who works at Langley as part of the Science Systems and Applications Inc. (SSAI) contract. Spangenberg had sequenced imagery from the Geostationary Operational Environmental Satellite 11 (GOES-11) that showed a persistent contrail that could match the "mystery" contrail.

Minnis then consulted a contrail "forecaster" put together by SSAI's David Duda and Rabindra Palikonda, who also work at Langley, and learned that conditions were "ripe" for persistent contrails over the Pacific west of Los Angeles, but that contrails would only survive for a short time closer to the coast.

"As it turns out, the high clouds seen in the background of the video were actually behind the contrail because the plane had flown north of the clouds," Minnis said, "and changed course to the northeast, so that the clouds were behind the contrail as viewed from Catalina Island. All of that information changed my mind."

Minnis said that while he can't prove the contrail came from an airplane, it is the "most likely" scenario based on his research.

"Later, while viewing some blogs, I found that the contrail corresponded remarkably well with flight AWE808, which flew from Hawaii to Phoenix; it showed the change in course to the northeast at the same location, further confirming my conclusion."